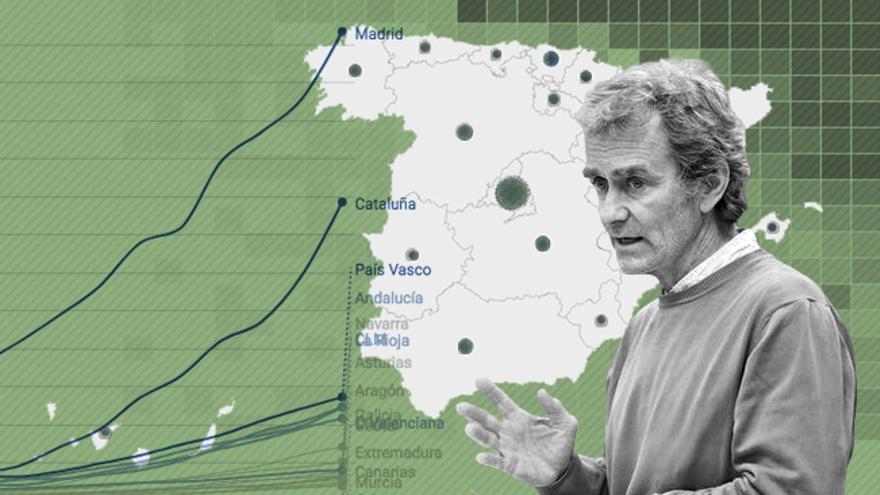 Data from the Ministry of Health updated on September 22, 2020.

To show how the epidemic is currently progressing, we show the evolution of weekly cases as well as deaths, hospitalizations and ICU admissions during the last 7 days for the entire country. The dashed line marks the end of the state of alarm and the beginning of the 'new normal', on June 21.

Evolution of the curve of new cases and deaths in Spain

Evolution of
number of new cases and daily deaths in Spain. The cases are shown by date of onset of symptoms or by date of notification and for the deceased by date of death. Click to see the detail

To see how well controlled the pandemic is and to identify possible outbreaks, the following map shows the main variables to see the situation of the epidemic in each province: if the cases are increasing or decreasing, the incidence of cases per inhabitant in the last two weeks, the total number of cases and the incidence of the virus compared to its population.

These data are published by the Carlos III Health Institute (ISCIII) through the National Epidemiological Surveillance Network (RENAVE) and it does so for date of onset of symptoms or the date of diagnosis for asymptomatic cases. As in the previous graph, the data from the last week may be underestimated since the date of onset of symptoms is taken into account and they take a few days to be diagnosed from the contagion.

* Health warns that the change in the notification system applied on May 25 may lead to discrepancies in the figures that will be eliminated as the new series is consolidated.

In order to know the degree of penetration of the virus compared to the number of inhabitants, we have calculated the rate of confirmed cases and the number of deaths in each autonomous region per 100,000 inhabitants. Confirmed cases refer to those identified by PCR or antibody tests — in the latter case, only those carried out after May 11 with compatible symptoms are counted.

The data from the ISCIII collect the number of people who began to suffer symptoms of the disease each day. In this way we can know what has been the evolution of the curve of cases detected in each community. Records indicate that the week of March 14 was key throughout the country. It also shows us in which communities there are sprouts, albeit with a delay. On the other hand, the series of deaths of the Ministry of Health collects the number of people who died each day with coronavirus in each community.

In the graph below you can explore the number of people who started COVID-19 symptoms each day in each autonomous community and the number of deaths affected by the virus. The data is shown with the daily average of the last week.

Are the hospitals saturated? From the 20th of August The Ministry of Health includes in its updates data on the situation of the healthcare capacity in the hospitals of each community. Thus, it is possible to know how many patients with COVID-19 are admitted, both hospitalized and in the ICU, in the last 24 hours. And also how many discharges occurred on the last day (Health has been since May 18 without providing the number of people recovered).

As of September 10, the autonomous communities had notified the Ministry of Health that almost 10 million diagnostic tests had been carried out. Of these, 7.6 were PCR tests (which measure the presence of the virus in the body) and 2.3, antibody tests, the so-called 'rapid tests'.

As a consequence of this modification, the report warns, they may appear "discrepancies with respect to the data of total cases previously reported". "This discrepancy could persist for up to several days."

The next day the 20th of August, Health added a new information panel in its daily updates, that of the 'Situation of care capacity and COVID-19 activity in hospitals', broken down by autonomous communities. This panel includes data on the total number of COVID-19 patients admitted and in the ICU, the percentage of hospital bed occupancy by patients with the disease, the number of admissions and discharges with COVID-19 in the last 24 hours. Health did not provide data on people recovered since May 18 (150,376 in total).