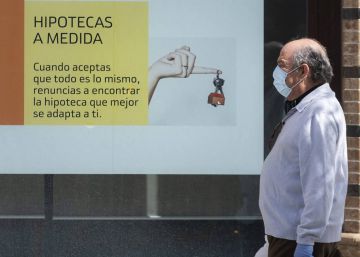 The Euribor’s comeback towards zero, started in March and continued in April, also continues this month. In the absence of data for Thursday and Friday, the index with which the interest rates of the vast majority of variable mortgages in Spain are calculated closes its monthly average at -0.081, compared to -0.108 in April, and -0.134 in May last year, so loans reviewed now will become more expensive. This rise, which has its origin in the measures adopted by the European Central Bank (ECB) To mitigate the effects of the economic crisis caused by the Covid-19 pandemic, however, it could be reversed in the coming months, according to analysts. In any case, experts rule out the Euribor returning to positive territory this year.

The difference of 5.3 basis points between the price of the index this May with respect to the same month last year will translate into an increase in the installments that borrowers are now going to deliver to their entity to return the mortgage. In this way, whoever has to review a mortgage loan of 150,000 euros at 30 years, with an interest rate of Euribor plus a differential of 0.99, will pay the next 12 months 475.77 euros compared to 472.40 euros which paid the previous month, representing an increase of 3.39 euros per month or, which is the same, 44.68 euros for the year as a whole, according to calculations by bank comparator iAhorro.

To find a Euribor at these levels you have to go back to the end of 2016, precisely the year in which the index started its journey below zero, a field that has never abandoned since then. The main reason for the current upward trend lies in the favorable conditions with which the ECB offers money to entities so that they, in turn, convert it into credits. “He even went so far as to establish an interest rate of -1%, improving the previous ones, which were at -0.50% and -0.75%”, highlights Joaquín Robles, analyst at financial broker XTB.

Also, Frankfurt is buying huge amounts of sovereign debt in the short term for states to finance their fight against the economic effects of the pandemic at the lowest possible interest rates. “This supply of funds is decreasing demand for products that banks and companies often sell to raise cash in the money market,” says Robles. As the Euribor reflects the interest rate at which banks lend money to each other and the interbank market has become less attractive and, therefore, more expensive, the index rises.

“There is also some pressure between entities for the greater difficulties that the countries of southern Europe may have in this phase, “adds this analyst,” so The distrust it would make them willing to lend money only to higher rates. ”

The abrupt movement of 20 basis points upwards that the Euribor has complied with during the last three months worries the ECB. The entity chaired by Christine Lagarde, in the words of Robles, “would be willing to take steps to keep credit flowing, but without increasing the price of this indicator.”

“To know exactly what the evolution of the Euribor will be in the short and medium term, we will have to wait for the next actions of the ECB and how the coronavirus crisis is unfolding,” adds the director of iAhorro Mortgages, Simone Colombelli, who, however , believes that the index “will not go to zero.” Along the same lines, Robles excludes this from happening until the ECB’s general interest rates are at 0%. “We are in the midst of a health crisis and macroeconomic indicators are going to be very deteriorated“Admits this analyst, who predicts” still a year and a half or two of low rates. “

Of course, in the coming months, if there are no spikes in the pandemic and the market stabilizes, Robles believes that the Euribor could lose part of the rise in recent weeks. But it is a path that, at the moment, is not at all clear.