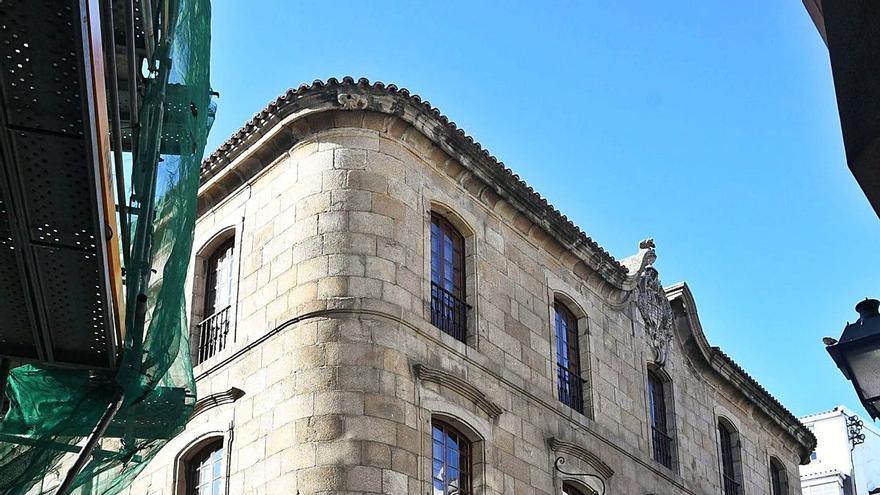 The Official Gazette of Galicia spoke clearly, early, this Monday: The Cornide house is an Asset of Cultural Interest (BIC). A status that, although provisionally until the final resolution of the file, obliges its owners, the Franco family, to a series of duties towards the building and its conservation. It is also a preliminary step for a future recovery of its ownership in the courts; a performance for which there is, in terms of pretensions and route, a close precedent that is still being discussed: the pazo de Meirás.

Heritage, tangible and intangible values. The Cornide house draws attention to anyone who passes by. It is difficult not to look up at its facade; and that which counts, face to face, with the Collegiate Church as a direct competitor. The strange thing, commented the experts appointed to prepare the report on which the BIC statement would be based, is that it no longer had that name. “It is an exceptional building, not only should it be declared BIC, but it surprises me that it is not already”, reflected, at the beginning of the works, professor Alfredo Vigo Trasancos. The mansion is one of a kind: in a French style and close to rococo aesthetics, the Cornide house is unique not only in Coruña urbanism, but also in Galician, for which it was enough to stamp a heraldic shield on its facade to declare its noble character. The Cornide family went the extra mile to showcase their status: whimsically shaped wrought iron railings on balconies, curvilinear ledges, openings and rounded corners. The Cornide house is a lonely Frenchman in the Old City; a particularity to which it owes, however, another of its heritage values: its privileged location within the urban context and its fit in the environment, as well as its proximity to other representative buildings, such as the Collegiate Church, with whom it shares the limelight; the Town Hall, the Palace of the Audience, the Plaza de las Bárbaras or the Church of Santo Domingo. The most valuable element of the mansion, although evident, is invisible to the eyes: there lived the illustrious polygraph José Cornide Folgueira y Saavedra, a fundamental figure of the Enlightenment. The Heritage reports, expressed the day before yesterday in the DOG, fully coincide with the values ​​collected in their respective artistic and historical reports by Professor Alfredo Vigo Trasancos and historian Emilio Grandío, whose conclusions were supported by the BIC petition raised last November by the Council of A Coruña.

New obligations for the Francs. The declaration of Asset of Cultural Interest does not modify the ownership of the building, which continues to legally belong to the Franco family. What will change will be their obligations with respect to the building: in addition to guaranteeing its good state of conservation, immediately report any type of damage or deterioration in the structure, request permission to carry out works and interventions and inform the Xunta of any offer of purchase or transfer intention, the Franco family will have to open the Cornide house to public visit. The gates of Cornide, forbidden for decades to curious eyes, must open at least four days a month for a minimum of four hours a day; a measure to which, if the antecedents of other family properties that underwent similar processes are taken into account, they will be reluctant. The family will also have to allow the entry of experts and technicians from the Administration to assess, inside, other elements that can be protected. Although the file may take up to two years to be resolved, the provisional protection that the property enjoys from the initiation of the procedure implies that these obligations are of immediate application for the Franks, who may appeal, however, this statement in court, an intention on which they have not yet spoken.

A suspicious obtaining. After the publication in the bulletin of the beginning of the procedure to protect the mansion, the slogan between the associations in favor of historical memory and the political parties was common: although they celebrated the declaration, the majority described it as a first step prior to recovery , for the public purse, of the Cornide house in the courts. The mayor, Inés Rey, expressed her intention on multiple occasions to claim ownership of the property through the courts, a process in which, she insisted, the municipal legal services are already working. On Cornide weighs the suspicion of a possible fraudulent obtaining by Carmen Polo, owner of the property since 1964. The historians Carlos Babío and Manuel Pérez Lorenzo documented in their volume Meirás, a pazo, a caudillo, a espolio the strategy followed by the woman of the dictator in collusion with the banker and great man of the Pedro Barrié de la Maza Regime to take over the palace: the house belonged, then, to the City Council of A Coruña, which submitted it, one fine day, to public auction; a bid that Barrié de la Maza will win as one of the only two applicants, the other being the deputy head of the Movement in A Coruña, José Luis Amor Fernández. Barrié will then give away the Carmen Polo house, which had already expressed its intention to acquire a home in the area. Documents of the time also show that the City Council financed reforms in the mansion when it already belonged to the Franco family.

Ways to recover Cornide “We see possibilities of claiming Cornide both for the Council and for the State”, judged a few months ago the jurist Carlos Aymerich, co-author of a legal report commissioned by the Council in which the ways to claim ownership of the mansion in the courts. The report details the paths that both administrations can take, together or separately, to regain ownership of Cornide. “The swap itself is void due to non-compliance with the 1931 law on the disposal of assets with an estimated age of more than 100 years, which requires a prior report from the General Directorate of Fine Arts,” Aymerich explained at the time. It is not the only vice that the lawyers found in the process: both the State and the Council have arguments to take legal action through civil and administrative channels. The latter is the one that presents the most possibilities for both administrations. The civil route was the one followed at the time for the claim of the Meirás pazo, as there was no administrative procedure in obtaining it, which did occur in the case of Cornide.

A precedent: Meirás. The steps followed for the protection and recovery of the Cornide mansion follow an almost identical path to that undertaken with the other Franco property on which the shadow of the patrimonial plunder weighed, confirmed, in the absence of recourse, by the courts last year . As is now the case with Cornide, the Meirás pazo was declared an Asset of Cultural Interest in 2008 after several decades of claims by parties and associations. However, it took more than three years for the first visits to pass through, due to the multiple resources that the family imposed to prevent the declaration from going forward. For the recovery (provisional, since the crossing of resources between the administrations involved and the family has not yet reached completion) of the property, it was necessary to wait almost ten more years. A devastating sentence in tone and conclusions endorsed in 2020 the bad faith of the dictator and his family in obtaining the property in 1938. It remains to be seen, in this case, the disposition of the Franco regarding Cornide, and if the process will be delayed in time or it will run in a more friendly way than with its neighbor from Sadense.