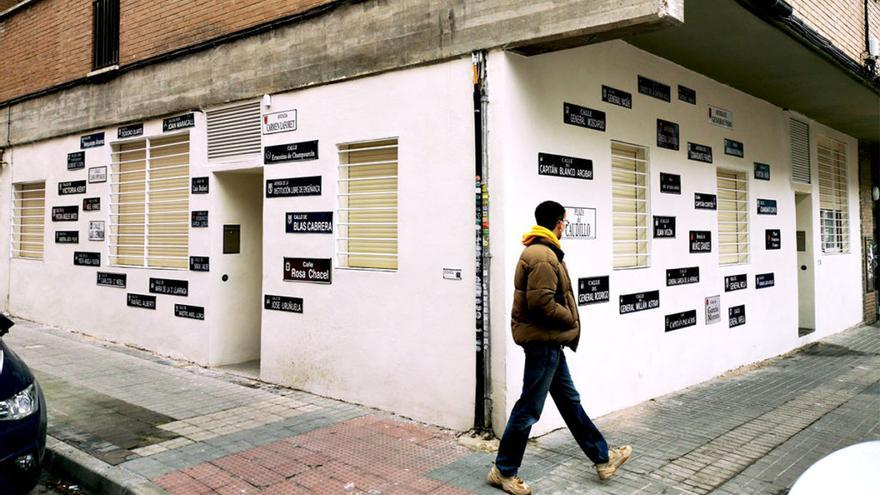 “We will admit that dialogue has not been possible 46 years after Franco’s death.” On the other end of the phone, the artist Mateo Maté (Madrid, 1964) acknowledges his defeat and, of course, that of democracy. “What is happening to us that we cannot speak to discuss what heroes we want in our streets? Do we really think that we live in a free society?” public roads.

The events date back to December. Then, some real estate entrepreneurs with artistic sensibilities – who prefer not to reveal his name – called him to invite him to intervene on the two facades of a basement of his property, on a corner in the Pueblo Nuevo neighborhood. Maté is quick in his findings and after two weeks he was already placing the plates on the right façade and those on the left façade.

The action is included in one of his most applauded series, called Domestic nationalism, in which he discovers how politics is part of the most intimate and private gestures even if it is not recognized: tablecloths, beds or stoves, everything is politics. So on the corner of Calle de Llanos de Escudero and Calle Berasategui he rode Right facade – Left facade.

In the first, he placed 24 replicas of street signs dedicated to Franco’s heroes: General Millán Astray, Muñoz Grandes, General Fanjul, Fallen of the Blue Division, General Yagüe or the Plaza del Caudillo. Some have been blacked out with white paint by neighbors. On the lower door on this side there is a blackboard hanging: “This is a house, please do not disturb if it is not necessary.”

At that moment the tenant of this ground floor appears, with a coffee and a pending work conference. He attends us urgently and without wanting to give many details about what it is like to live in a work of art that challenges dialogue with the street. Before disappearing inside, he hastily says that nothing has ever happened to him, that he has been living there for a year, that he works at home and that he has not suffered the wrath of any spontaneous against the military staff that hang and surround the two windows of his home. On the door he has hung a blackboard that says: “This is a house, please do not disturb if it is not necessary.” However, the owner of the property explains to this newspaper that in a few days he leaves the apartment due to “the demonstrations and harassment suffered” by the military establishment.

On the façade on the left, things have not been so simple either, according to the artist. Right now this ground floor does not have a tenant either. Here the writers Rosa Chacel and Carmen Laforet, the painter Ángeles Santos, the poet Ángela Figuera, the filmmaker Luis Buñuel, the photographer Robert Capa or the poet Rafael Alberti appear among the 24 names on plates distributed on the blank wall. None is crossed out but they have uprooted that of Maestra Justa Freire, who should have replaced that of Millán Astray if Mayor José Luis Martínez-Almeida had appealed the reinstatement of the military coup.

Art is going to be more expensive for the two real estate developers than they thought. “We did not expect this reaction. The Lamppost Project It is a proposal for the intervention of many other facades in the neighborhood. Right now there are three more finished and several in progress ”, they say. Maté’s is the only one that has given them a headache. “When you commission the artist to do the work, the artist proposes freely. However, they assure that they are in talks with Maté so that the project evolves aesthetically and find a less annoying solution for the tenants. “We cannot let the people who live in these houses go through this,” the owners maintain.

The tension began in the same assembly. The Municipal Police stopped the installation, although Mateo Maté showed the agents all the permits and authorizations. He says that throughout this year the Madrid City Council has sent the property with a technical requirement that orders the removal of all the plates or sanction: “What he proposes to remove the plates is that placing them is the authority of the City Council, not of any free citizen. And they say that it leads to confusion, ”explains Maté.

It generates confusion, but they are not confused with each other: the plates with the name of the street are screwed in the first height of the building and those of the artist are grouped in the façade of the ground floor. “This is harassment of freedom of expression,” Maté ditch. The promoters have appealed the request to the City Council explaining that they are not street names, but a work of art.

“The Madrid City Council only likes Francoist plaques if they put them up. If others use them, it seems wrong to them. Especially if they are used to denounce tributes and celebrations to the dictatorship,” explains Mateo Maté. Now he thinks that if he had made a hyper-realistic painting, with the plates drawn on the wall, it would be a mural painting and this could have avoided municipal harassment by not being plates. Art in public must know the urban discipline to protect itself from it. “Public art is not what is in the street, but the one that dismantles moral hypocrisy. It is public because it proposes a dialogue with the community in which it operates. It happens with graffiti, which is no longer disobedient to decorate the streets “, Add.

“This is a clown, a bullshit. The one who has done it will be believed to be an artist. This country is run by a letter clerk and we lack a lot of knowledge of history. The Historical Memory Law and the Equality Law are two bullshit. I don’t care if they remove them or leave them there because no one here knows who General Mola is, because they are all from outside, “says a neighbor who enters the adjoining portal. She pulls her shopping cart, is around 50 years old, and explains that this country is “out of control” because “a woman can accuse you of having raped her but a policeman who has been beaten is not believed.”

A couple comes out of the same portal with some bags that they throw into the garbage can, while they complain about how dirty the street is. He answers what he thinks about the installation of the Francoist plates: “I am outraged. I do not want these names there all day on. The others at least are writers and writers, but these are warriors. It cannot be allowed!” , let go before returning to his errands and leaving us with “warriors” noted in the notebook.

Another neighbor passes by who crosses in front every morning on his way to work: he wears a camouflage jacket with a Spanish flag on his arm and says that he had never noticed the names, “only that some are crossed out and others are not” . Around thirty years old. “It must be that some do not like it at all,” he says.

Mateo Maté says that the duty of artists is to seek the limits to reveal if our democracy is mature. The conclusion reached by the artist does not seem satisfactory: “We think that we live in a much more democratic society than it really is.” With this action he wanted the citizen to reflect on the question of the hero and his representation in our streets, because these models “are somewhat confused.” The artist has mobilized against the propaganda of values ​​that act with impunity in public, as if they were still exemplary.

Are these heroes the ones who represent us? That question is the one that has generated discomfort in a part of the community, which prefers to deny the conflict rather than resolve it. “He does not propose a dialogue, it is a provocation! It seems wrong to me because this is provoking the people. There is no debate about this here because the people in the street are talking about the lack of work. He has no intention of debating , just to face “, says another neighbor, retired, without losing the smile. He also says that there have been fights between the neighbors and the tenants and what surprises him the most is that “the televisions” have not come to tell about it.

The street that divides Spain in two dared to question the values ​​imposed in a dictatorship and inherited without purifying in a democracy. “I don’t give any importance to that,” and this neighbor points to the facade. “I have my ideas and it doesn’t matter to me that I don’t care. I have my ideas, I like the flag because I was born here many years ago,” he says. He is 75 years old, has been a taxi driver for fifty years and assures that the first car on this street was his. “This is a working class neighborhood, left and right. How are you doing at work?” He asks.