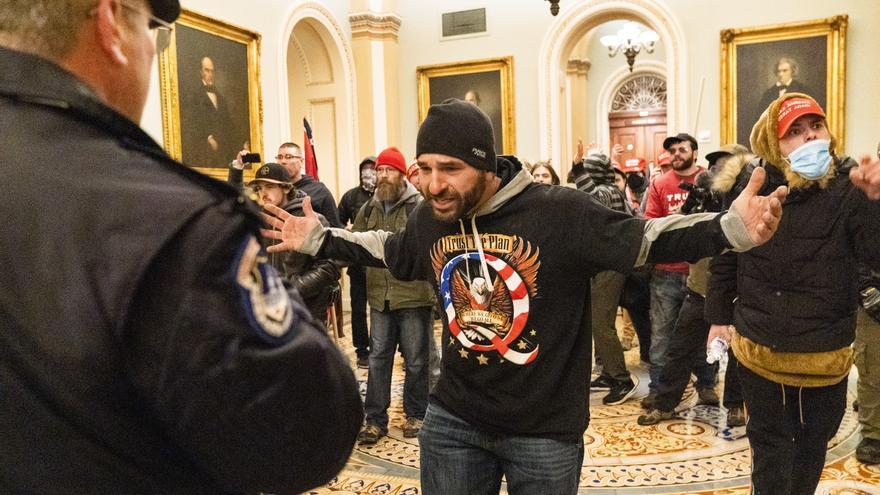 At about 2:11 p.m. on Wednesday when the assault on the US Capitol occurred, Vice President Mike Pence was evacuated from the Senate. At the time, the pro-Trump mob was downstairs, accessed by clashing with the police, climbing up, and breaking windows.

A group of assailants confronted the African-American agent Eugene Goodman, who tried to contain them. Meanwhile, inside the main chamber, several armed officers were trying to block the access doors. The assailants were getting closer and closer.

Outnumbered and armed with a baton, Goodman is forced to backtrack and climb the stairs to the floor of the main Senate chamber. In a video recorded by Igor Bobic, a congressional journalist for the Huffington Post, the agent is seen running up while trying to contain the protesters. The agent then turns to his right while pushing the leader of the group, who is wearing a QAnon conspiracy theory T-shirt.

At first, that video went viral as a sample of the extent of the assault, but hours later, journalists and congressional experts highlighted the importance of Goodman’s maneuver. “His name is Eugene Goodman. Remember his name. He almost certainly saved lives,” said Kristin Wilson, a journalist covering Congress for CNN. “In front of the agent, going up the stairs, there is a group of assailants. The agent looks to his left. Between those two chairs is the entrance to the Senate. He led them to his right, away from their objectives.”

According to timeline produced by The Washington Post, “If the assailants had turned to their right, they would have been a few meters from the main entrance. On the other side of that door, if they had managed to enter the Senate, there were at least half a dozen armed agents, including one with a semiautomatic weapon. in the center of the Chamber watching every entrance “.

“Looking again at the video I made of the mob storming the Senate, there is a moment where the leader of the group looks to the right for a second before following the agent to the left, away from the entrance to the Chamber.” , wrote days later the own Bobic, author of the video of the agent.