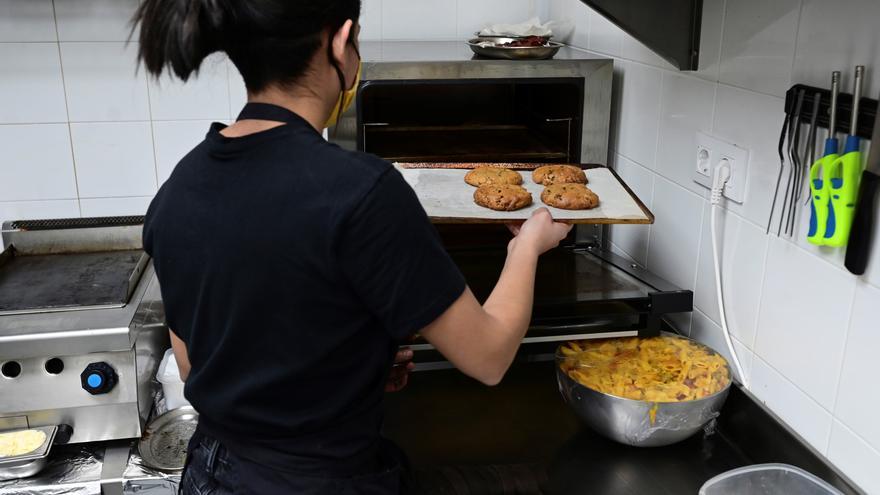 Madrid, Feb 28 (EFE) .- The pandemic has brought with it in cities like Madrid the proliferation of ‘ghost kitchens’, dedicated exclusively to food delivery, a recent business with diffuse limits that also causes complaints from neighbors about noise , the smells and the hustle and bustle of the delivery men.

38 ‘ghost kitchens’ and a seven-story industrial fireplace are being built on the ground floor of a residential block in the Madrid neighborhood of Prosperidad that crowns its patio and the views from its windows.

The noise, the smells, the bustle of the delivery men and the accumulation of waste are the main fears of the residents of Zabaleta, Cartagena, Canillas and Quintiliano streets, who see a business emerging under their houses involved in the controversy that, in in this case, it will start working in March.

“I don’t know how this can be authorized. It’s nonsense,” says José Luis, a resident of Canillas Street, who from the window of one of his bedrooms can almost touch the fireplace that emerges in the patio of his house.

It assumes that during the summer you will not be able to open the windows of your house due to the noise, the smells and the impregnation of the oils that this chimney will expel and what most “annoys” you is that they are going to take away a very important thing in your life: tranquility.

According to José Luis, the decision to implement these ‘ghost kitchens’ took place on March 13, in the middle of the first wave of the pandemic, during a meeting of the neighborhood community that approved it by majority.

Among those who voted in favor is the owner of the ground floor, who has several homes in the building, but a good part of the neighbors objected, such as José Luis.

The president of the Valle Inclán Neighborhood Association, Félix Arias, an architect specialized in urban planning, estimates that this business promoted by the Cooklane company will deliver an average of 6,000 meals a day.

He criticizes that this type of project (known by other names such as dark kitchen, blind kitchen, delivery-only or digital restaurant) are framed within an “obsolete” legislation: the General Urban Planning Plan, approved and in force since 1997.

The municipal group of Más Madrid denounces that it is “a new activity that does not fully fit with the regulations in force, straddling the restaurant services, although without bars or tables, and the food industry.”

For this reason, it recently presented in the plenary session of the Madrid City Council a proposal to modify the General Urban Planning Plan that was rejected by the PP, Cs and Vox.

Municipal sources in the Urban Planning area have explained to Efe that they deliver the building license to build ‘ghost kitchens’ because the projects comply with current regulations for industrial use, which is where this activity is currently framed.

However, the same sources add that in collaboration with the Activities Agency they will require a study of mobility and its effect on the environment in the authorization procedures for these activities and will require the provision of loading and unloading places.

For its part, the College of Property Administrators of Madrid (CAFMadrid) warns that ‘ghost kitchens’ cannot be installed in a normal home because they are considered industrial kitchens, with powers and characteristics that do not resemble kitchens of a house.

“In this sense, the adaptation of a premises for this use requires the execution of works to adapt it to the current regulations for this activity. The license would not be for a restaurant, since it is not a service to the public with a food area, but rather The entire premises would be considered a kitchen because it is intended for the treatment and preparation of food, in this case of large dimensions, “he explains.

The president of the Cuatro Caminos-Tetuán Neighborhood Association, Antonio Granero, in Madrid capital, has so far detected six concentrations of this type of kitchen, several of them on the ground floor of residential buildings.

“The hustle and bustle of motorcycles is constant and smells permeate every house,” he says of Araucaria Street, where eight ‘ghost kitchens’ have been installed under a block of flats.

FoodCraft operates here, a restaurant that only exists on ordering platforms, which began its journey in early September and decided to approach this type of business due to “its low price” compared to a common restaurant.

“You have to understand that it is a new type of business and, like everything new, at first it scares and is not well understood but this will be in our lives and it will have to be the administrations that regulate and establish what are the limits of the ghost kitchens, “he defends.

In the same way, Christian Lucco, from Madrid Ghost Kitchens, is pronounced, who offers rental spaces with kitchens for these businesses, which denies that they are dark.

He assures that, as in all sectors, there are companies that “do it well and others do it poorly” but each blind kitchen that opens goes through a series of processes so that “everything is in order.”

“Ghost kitchens are not an enemy, they are a complement to traditional hospitality and you have to get used to them because they are here to stay,” he says.