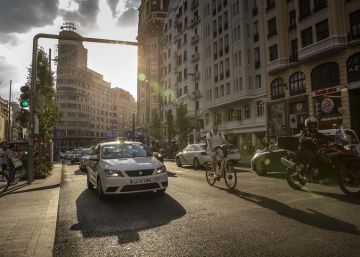 Central Madrid, the low-emission area of ​​the center of the capital, has driven a reduction in pollution by nitrogen dioxide (NO2) in 22 of the 24 measurement stations of the capital compared to the average of the previous nine years, according to a report from Ecologists in Action based on municipal data presented this Thursday. Since 2010, Madrid has breached the maximum NO2 levels and that breach has motivated the threat of sanction by the European Union. These data are due to a positive ‘contagion effect’ of this restricted traffic zone, since the weather – which also influences – has not been favorable. Despite these data, the City Council of the capital, governed by PP and Citizens, continues to deny the effectiveness of the measure and works to decaffeinate it and allow more polluting vehicles to enter the center of the capital and reduce the perimeter of the area. Ecologists in Action, which already prevented the mayor from applying a moratorium on fines, has filed an appeal against this modification before the contentious-administrative court.

“The evidence is that Madrid Central works and improves pollution. That is why we consider that it is necessary to extend it and expand some of its measures to the rest of the city, ”explained Paco Segura, spokesman for the environmental organization. In 2019, only two stations have breached the legal limit values ​​of 40 micrograms of NO2 per cubic meter (µg / m3) of annual average value, those of Elliptical Square and Aguirre Schools, when between 2010 and 2018 the number of stations that violated this limit remained between the 18 infringing stations in 2010 and six in 2014. ”Madrid has continued to violate the legislation on nitrogen dioxide, but they have been many fewer stations than we are used to,” he said. Juan Bárcena, responsible for air quality of Ecologists.

“If we look at the map of the stations, the epicenter of where pollution has been reduced is Central Madrid, and there is a great reduction also in the stations that support this area. On the other hand, where it is less reduced is in very peripheral stations, such as El Pardo, Villaverde or Barajas ”, added Bárcena. Thus, “the data clearly shows that there is no frontera border effect’, as PP and Citizens said, but a ‘contagion effect’ that acts positively throughout the city, ”continued the environmental spokesman. The NO2 reduction reaches 10% compared to the average values ​​of the decade, but reaches 22% if you look at the values ​​of the Plaza del Carmen, the only measuring station located in the interior of Central Madrid. This point has achieved months with values ​​below the annual limit value of NO2, and six months with the minimum values ​​of the decade (there are records since 2010).

And this is so, say environmentalists, “despite the erratic policy of the new City Council aimed at promoting the use of the car, extending the use of polluting vehicles and letting more cars into the center,” said Segura. It’s what they call the ‘Almeida effect’: “The municipal government team has denied that Madrid Central works using the data in a tortuous way. They were painted green at the top of the climate while eliminating bike lanes and reducing the perimeter of the low emission zone, something we believe is illegal. That is why, today we have taken it to the administrative-contentious courts, ”added the spokesman. It was precisely a complaint by Ecologists in Action that managed to paralyze the moratorium on fines that the City Council intended to apply for three months, and that it was suspended after a judicial blow.

“In addition, Almeida and Villacís they presented Madrid 360 as if it were an already approved plan, when they are nothing more than washed out measures that are not yet approved, so they generated tremendous confusion among citizens, who do not know if some measures or others are active, ”said Segura. “We play a lot with these policies, which should be consistent and permanent. When you ask the citizens to leave the car at home you cannot turn back, ”he concluded. The report is presented the first day the anti-pollution protocol is activated this year due to the poor air quality in Madrid, which limits the speed to 70 kilometers per hour on the access roads to the capital.