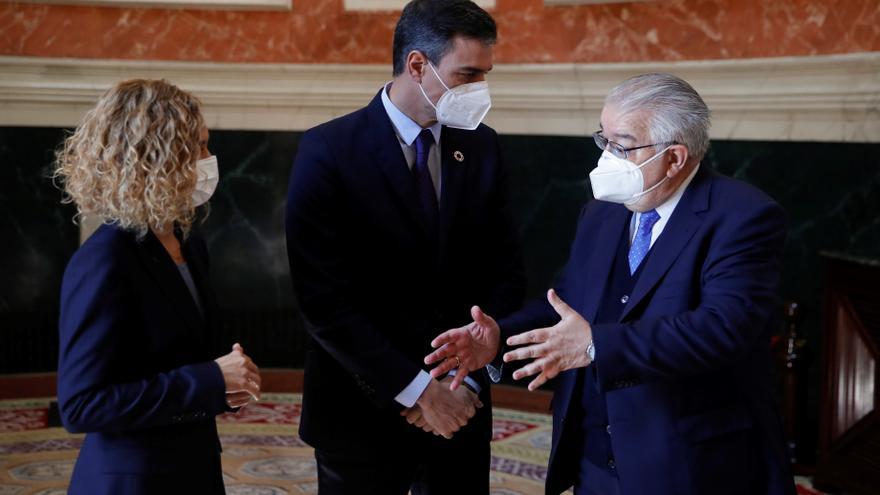 The judgment that it considers unconstitutional The state of alarm decreed by the Government in March 2020 to combat the health crisis dispensed with several paragraphs of the initial presentation that were sympathetic to the Government’s will to save lives, although this did not affect the final meaning of the Court’s ruling Constitutional.

The most prominent of these deleted paragraphs from the presentation, to which elDiario.es has had access, is the one that states that, “given the circumstances surrounding” the imposition of the state of alarm, “this radical limitation (or suspension) of the fundamental right to freedom of movement cannot but be considered as a reasonably adequate and necessary measure to achieve the stated objectives “.

The statement was introduced by the speaker, Pedro González Trevijano, in the final passages of the legal bases. The aforementioned paragraph, which he later eliminated from the final ruling, continues as follows: “From the extreme perspective of control that corresponds to this court, the measure can be described as adequate, in view of what could be prudently valued in its day by who adopted it, on the basis of information, research and data then available or immediately confirmed “.

With a slim majority of six to five, the Plenary of the Constitutional Court partially upheld the unconstitutionality appeal presented by Vox against Royal Decree 463/2020, thus overturning the measure that came into force on March 14, 2020 on limitation of the movement of people and vehicles in spaces and roads public, as well as the capacity of the Ministry of Health to modify and expand the containment measures in commercial activity.

Another of the statements that fell from the presentation and that showed understanding with the Government’s intentions reads as follows: “Nor can the measure be materially censured as excessive or unavailable because there are other possible measures of similar efficacy, but less incisive on the fundamental rights affected. ”The text of the presentation seemed to refer to the National Security Law or the Public Health Law, which the Government rejected in favor of the State of Alarm Decree.

Along the same lines, the speaker González Trevijano recalled in the initial text that “it is up to the legislator [al Gobierno y al Congreso de los Diputados aquí] carrying out the judgment of necessity “, as long as it does not cause ‘a patently unnecessary sacrifice of the rights that the Constitution guarantees (STC 8/2015)’; a general rule to take into account in a situation such as that caused by the pandemic, characterized by the uncertainty about the eventual effectiveness of alternative measures to strict physical distancing between people, measures that, in hypothesis, would have been presented as more selective ”.

And the same speaker then returned to contextualize the measure adopted by the Government that the Constitutional Court ruling was going to be responsible for censoring: “Along with this, we must not forget the relative scarcity of appropriate health resources to face the expansion initial pandemic [el desabastecimiento de productos necesarios para la protección de la salud pública” al que se refiere expresamente el artículo 13.a del Real Decreto 463/2020]”.

Different sources of the Constitutional Court consulted by elDiario.es disagree on the reason for the deletion of these paragraphs. According to one of these versions, the introduction of the aforementioned comprehensive statements with the Government’s decision constituted an attempt by González Trevijano to attract votes from the progressive sector to his presentation and that, once it was verified that these adhesions were not going to take place, he proceeded to remove them.

Other sources of the Court assure that it was the magistrates who supported the ruling who proposed to González Trevijano to withdraw those affirmations because they considered them “reiterative” because the ideas they expressed were already adequately reflected in the text, in the sense that the Executive erred regarding the legal framework to tackle the effects of the serious health crisis but not in the end or its effects.

In front of these deleted paragraphs there is an addition that did not appear in the initial presentation and that is key in the sentence. This is the last point of the legal foundations, just before the text expresses the ruling of the Constitutional Court, referring to the fact that the declaration of unconstitutionality of the state of alarm “will not be by itself” reason on which to settle possible claims of patrimonial responsibility , “without prejudice to the possibilities in this regard included in the Organic Law of the states of alarm, exception and siege”.

This paragraph, which was not in González Trevijano’s original text, is introduced by the speaker to enlist the support of Judge Encarnación Roca, considered a member of the progressive sector, although her name was endorsed by the PSOE at the request of CiU, according to one of the sectors consulted by this means. These sources assure that Roca, aware that his vote would favor the unconstitutionality of the state of alarm, did not want an avalanche of patrimonial claims against the State to be derived from it.

On the other hand, other sources of the Constitutional Court assure that Encarnación expressed before everyone from the beginning that it would support the meaning of the presentation and that it only requested that the ruling collect with all possible clarity the limitations of its consequences in terms of the requirements of patrimonial responsibility to the state. This caused, say these last sources, that González Trevijano added the aforementioned paragraph.

The debate within the court about the state of alarm has caused a huge division among its magistrates, which has resulted in a total fracture between those who were betting on rejecting the Government’s measure and those who argued that the legal coverage was correct and adjusted to the Constitution.

This second block, headed by the president of the court, Juan José González Rivas, has issued a series of private vows in which they charge against the conclusions of their colleagues. In the case of González Rivas, for example, he criticized that the analysis of the constitutional issues that had raised the Vox appeal had not led the court to reach a consensus, and that instead of the deliberations they had ended up with such disparate positions, the magistrates so divided that the vote was decided by a single vote.

Andrés Ollero, for his part, criticized in his private vote that the debate in the Constitutional Court has moved around whether the different states – alarm, exception and siege – were gradual, and the circumstances that force to apply One or another.

María Luisa Balaguer has gone a little further in her text. The magistrate, in addition to analyzing why she believes that a state of alarm was justified, harshly charges against her colleagues. His vote begins by regretting that it has not been possible to reach “an acceptable argument for the majority” of the court – just as the president does – and criticizes the “extreme polarization” that has occurred within it.

In his opinion, the sentence “generates more legal uncertainty than it tries to combat” and goes so far as to criticize the “internal noise” generated in the court, which has sustained, he says, “extra-legal positions that are not very recommendable for the future, in an institution that It should only be pronounced through its resolutions. “

But the hardest vote has been that of magistrate Cándido Conde Pumpido, which in a first draft went so far as to affirm that the presentation that ended up winning by a single vote difference is “more typical of a layman than that of the maximum interpreter of the Constitution.” The six magistrates who are affected by this sentence have been absent this Tuesday from the plenary session of the court as a protest, as has reported El País. Count Pumpido has been forced to issue a note of apology in which he highlights the “integrity, solvency and intellectual commitment” of his colleagues in the Constitutional Chamber.