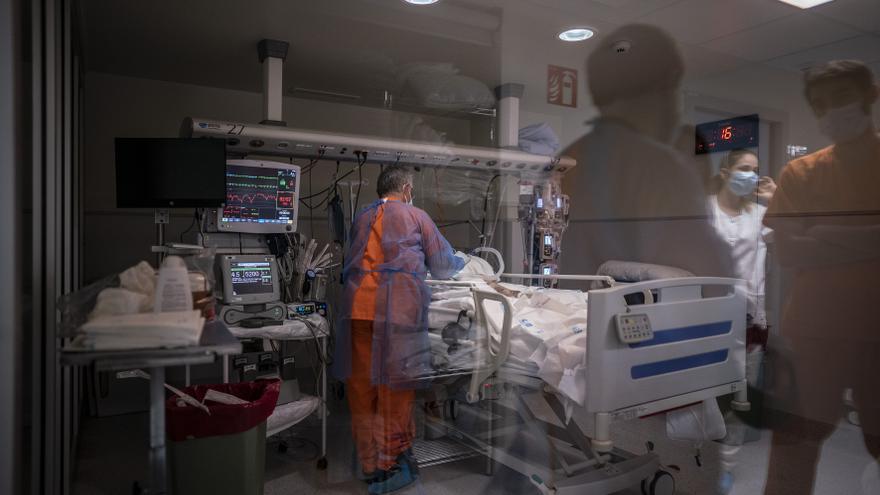 The danger of omicron is in the numbers. This variant is less serious in general –either by itself or by the effect of vaccines– but its high transmissibility has ended up taking its toll. The sixth wave, which had been characterized by a speed of spread not seen now but a much lower number of ICU admissions and deaths, has ended up breaking out. Although the percentage of those infected by omicron that requires hospital admission is very small compared to the total number of infected, with 1.5 million positives registered in the last two weeks alone in Spain, it was a matter of time before it ended up reaching the hospitals.

And it has already happened. COVID is beginning, again, to cause cancellations of minor interventions and to saturate intensive care units and emergencies, according to the data and confirmed by doctors on the ground. There are provinces that have higher hospitalization data than at the worst moment of the third wave, the one with the greatest impact so far. And it happens just when, as in the rest of society, health casualties accumulate, although for the moment they are being maintained on reasonable terms so as not to affect the service, according to medical societies.

“Since October, the number of patients admitted to the ICU has been doubling every month. We are far from saturation, collapse rather, not at the level of last year, but the situation is beginning to be worrying,” explains Álvaro Castellanos , president of the Spanish Society of Intensive, Critical Medicine and Coronary Units (Semicyuc). “The most worrying thing is that the increase in income is maintained. Content, but constant, there is no flattening of the curve and the forecast is that in the next two weeks the number of admissions will continue to increase,” he deepens.

The data shows that today there are 2,200 patients admitted to the ICU throughout Spain and many communities in percentages of occupation that exceed 25%, a line that marks the passage from a “high” to “very high” risk situation, the highest of the classifications in the COVID traffic light of the Ministry of Health. The national average is now at 23.6%, but there are nine communities that exceed the 25% threshold (see graph), some such as Catalonia at 44%, or the Basque Country, which exceeds 35%, although these data fluctuate a lot because they do not depend only on the income in these units, but also on the beds that are temporarily enabled and that can modify the percentages.

If the still photo is “troubling”, the trend doesn’t seem to be good news either. Since hitting bottom in mid-October after the third wave (the one that reached its peak in February 2020, the most serious to date), hospital and ICU bed occupancy has only increased. Far from the figures that were given then, hovering around half, but the line goes up and up. “We are rising in terms of admissions,” confirms Pere Domingo, COVID coordinator at Hospital Sant Pau in Barcelona, ​​”not explosively, but in mid-December we had 1 or 2 a day and now we are at 9 or 10, although fortunately it has been a progressive rise.

Official statistics say that the 32,023 hospital admissions for COVID and 4,894 admitted to the ICU that were registered on February 1, 2021 are still double the 16,493 and 2,200, respectively, on January 10. But it is equally true that on November 5 there were 386 people in the ICU and today there are 2,200. They have multiplied by six in less than two months. Hospital admissions, which hit bottom on October 28 with 1,647 people occupying a bed, have multiplied by ten. And neither have we reached the peak nor is it going to happen in the very short term, according to experts. “We do not plan to reach those figures [de 2020], but the number of admissions continues to increase and there is no prospect that this increase will slow down,” predicts Castellanos.

At the Sant Pau Hospital in Barcelona, ​​in the autonomous community with the highest occupancy of ICU beds in the entire country, the situation is “unstable and dangerous”, describes Pere Domingo. “We have today [por el miércoles] 99 patients admitted with COVID, 31 of them in critical care units and the rest in conventional hospitalization,” he says while clarifying that the relationship between serious and not so serious (between being in the ICU and being on the ward) is variable and in any case The figures are lower than the peaks experienced in 2020, when there were 450 admitted with coronavirus and 100 in the ICU.

In the Basurto Hospital in Bilbao, another of the currently hardest hit autonomies, COVID patients have long since displaced those who are not from semi-critical beds, according to Sarai Quirós Fernández, a pulmonologist at the center and coordinator of the Respiratory Infections and Tuberculosis area of ​​SEPAR (Spanish Society of Pulmonology and Thoracic Surgery). “After the summer wave, the UCRIS (intermediate respiratory care units) were closing and we were able to treat non-COVID patients, but it’s been a month and a bit since all the COVID patients have displaced the non-COVID ones; we even have COVID patients out of our facilities because they don’t fit us”, he explains.

It is happening in all hospital instances. In the Emergencies, “the situation of the services is complex and we are at the limit in many cases”, illustrates Javier Millán, spokesman for SEMES (Spanish Society of Emergency and Emergency Medicine). “We have to maintain the two care circuits, guarantee safe care for those who come to the ER… We are noticing that many people are coming, we are already over 2019. The number of hospitalized patients and those admitted to the ICU is increasing, and this puts enormous strain on the health system. We in emergencies have limited capacity, so do ICUs,” he argues.

The new epidemiological situation, with a good part of the population already vaccinated and certain age groups also with the third dose, is slightly altering the profile of people who go to hospitals and end up in ICUs, professionals say, which is characterized by a reduction in the average age of current entrants. “[En esta sexta ola] we have gone through three phases,” explains Castellanos, “Initially, towards the end of October or the beginning of November, the percentage of vaccinated patients in the ICU increased and even exceeded that of the unvaccinated, which was fundamentally due to the decrease in the protective effect of the vaccines after six months have passed (since their inoculation)”.

Then the campaign of third doses began and with most of the communities with a very high percentage of people over 60 years of age with the third injection, “we have seen a decrease in those admitted vaccinated and an increase in the admissions of those not vaccinated. Currently , in most communities we have 70% of unvaccinated people under 65 years of age and the rest, in general, vaccinated between 60 and 70 years of age, immunocompromised due to a chronic disease or because they are receiving some type of immunosuppressive treatment” , dissects Castellanos.

“The main indicator [a la hora de ver quién ingresa en un hospital] is whether he is vaccinated or not. Between 80% and 100% of those admitted to both the ICU and here, depending on the moment, are not vaccinated,” says the pulmonologist Quirós, who slips another question that she has been observing. “The feeling, although I do not have figures that corroborate it , is that fewer people enter than before, but more of them need the ICU”, he comments.

And the thing is serious, although sometimes the focus is lost between announcements that ómicron is less serious, says Castellanos. “2,200 patients in the ICU and 17,000 in hospitals are alarming numbers, especially considering that mortality in intensive care units is around 25%,” he warns.

Another different behavior that omicron brings is that it is shortening times. The evolution of those infected is faster, for better or worse, although the data is not yet conclusive. “The criterion when establishing whether someone enters the ICU or not is the same as before: severe pneumonia with severe, refractory respiratory failure, which requires mechanical ventilation. But now it remains to be seen whether omicron evolves more favorably than other variants such as delta And since we’re starting to see omicron income now [el plazo medio desde que se registra el positivo hasta que un paciente acaba en la UCI son dos semanas], we still need one or two more weeks to find out”, illustrates the president of the Semicyuc.

Those responsible for the ICUs and the Emergencies also report how the lack of preventive measures, except for some loose communities such as Catalonia, is undermining the morale of many professionals, who only see the situation of their hospitals worsen while outside nothing is done to improve it. . “It is true that we are a bit at the limit, we are tired. We are at the limit because the situation is complicated by the pressure we have on care, but also by the response of politicians and the lack of recognition. It is not that we want applause, but there are things that are difficult to understand when one is so tired”, admits Millán, from SEMES. “People are tired” – Castellanos abounds – of seeing that the measures that we all know are effective in reducing infections and income have not been taken, such as limiting hours, capacity or even certain mobility. A very strong commitment has been made to vaccination and the third dose, which is effective, but in the end it is also insufficient,” he concludes.