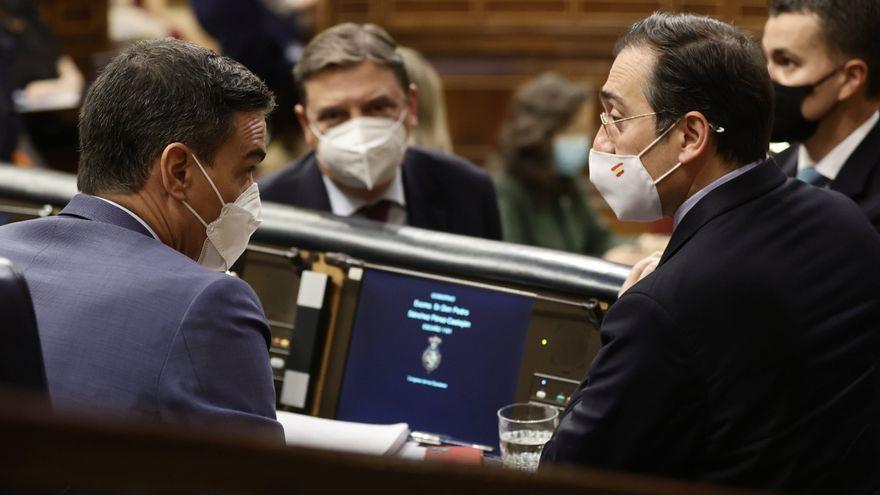 New scolding from Congress to Pedro Sánchez for the change imposed on the historical position regarding the Sahara. this time just 24 hours before the president travels to Rabat to be received by the King of Morocco, who will break his fast as a sign of the new harmony after the recomposition of relations with Spain precisely because of that change in foreign policy that involves support for his autonomy plan for the former Spanish colony. The debate has taken place at the request of United We Can, ERC and EH Bildu, who promoted a non-law proposal to ratify the support of Congress for the UN resolutions related to the conflict. That part is perfectly manageable for the PSOE, which insists that its position has not changed because it continues to frame the bet on a solution that is "mutually acceptable by the parties."

There was no member of the Government during the debate, but the coalition partners have made it clear that Sánchez and the Foreign Minister, José Manuel Albares, do not have the support of the Chamber before their trip to Rabat. There has once again been unanimity in criticism, although with nuances: Vox has warned that the letter that the socialist sent to Mohamed VI does not make Spain "obliged to anything" and the PP questions the ways in which the Executive has imposed the change, fundamentally for not having warned the main opposition party beforehand.

Especially critical has been the spokesman for United We Can, Gerardo Pisarello, who has compared the situation in Western Sahara with Ukraine. "Nothing except a petty and short-sighted calculation would justify not defending with the same conviction the right of the Saharawi people to freely determine themselves against the colonialist claims of Mohamed VI", the deputy began, who described as "disturbing" that Sánchez refer in your letter to the king of Morocco as "ally and great friend".

“A progressive government cannot use this language, it cannot do it without violating its bases, its parliamentary partners and without turning realpolitik into a sad exercise in cynicism”, he continued before asking himself: “What would happen if, in the case of Ukraine Shall we say that Putin's proposals are the most realistic, fair and credible on the table?

The other promoters of the initiative have spoken along the same lines. “Tomorrow the government will travel to Rabat. We warned that they could not go to Rabat with a position that only the PSOE defends”, said the ERC deputy Marta Rosique, who has assured that her group “will not stop” until the socialists return to the previous position. “The proposal that you support is impossible, unfeasible. It is nonsense that they say that she is serious, realistic and credible”, expressed the parliamentarian of EH BIldu Jon Iñarritu: “Why does Sánchez not go to Tindouf to explain to the Saharawi representatives why she believes that she is the best? ”.

“I confirm that the Government is absent. I deduce that he is going to do what he wants, whatever Parliament tells him”, said the PNV spokesman, Aitor Esteban, who in this matter he is especially angry: "You will do what you want in a plan that says it exists but that nobody knows about, even though it has been claimed." The Basque nationalist group has presented an amendment to the text of United We Can, ERC and Bildu to make it clear that Congress shows its "disagreement" with the change of position and specify support for the right to self-determination that contemplates independence as an option. “If we don't say anything about that, the government is going to get by. The PP, which we do not know if it complained about the substance or the forms, is not going to get wet”, Esteban has summarized.

Citizens brand the Polisario Front as a "terrorist group"

Ciudadanos has also presented an amendment in which it adds the urgency for the recovery of relations with Algeria. Despite the fact that it agrees with the text of the initiative so that a solution can be found within the UN framework, Inés Arrimadas's party will not support it, as explained by deputy Miguel Gutiérrez, who incidentally revealed a conversation private with the parliamentarian of Bildu. “We will not be able to vote in favor of this proposition. When yesterday he asked Iñárritu about our amendment, he told us that the Polisario Front had told him that he did not have to accept any so that the PSOE would have to vote in favor. Talking about the Polisario Front is difficult, it is a bit hard for us. That the executors of ETA continue to support terrorist groups such as the Polisario Front is not something that this Chamber should tolerate for us”, he assured. The deputy of the CUP Albert Botran has reproached him for that comment and has reminded him that he is the representative of the Saharawi people before the UN.

The result of the amendments will depend on the direction of the vote of the PP and also of the PSOE. “This radical turnaround has been made without informing the main opposition party and without informing or debating it in Congress or in the Council of Ministers. We are facing a non-law proposal presented by one part of the Government against another part of the Government”, reproached the conservative deputy Valentina Martínez. “Sánchez's supporters believe that they can continue in their armchairs while they seek a facelift from Congress, do not seek Vox's support for that. They are responsible for what he is doing”, said Iván Espinosa de los Monteros, who has also not revealed what the 52 deputies of the extreme right will vote on Thursday. "Spain is not legally or morally obliged to anything that this letter contains", he pointed out about Sánchez's letter that supported the Moroccan autonomy plan before warning: "Lords of Podemos, you are committed".

The PSOE has announced that it will vote in favor of the non-law proposition because it agrees with what its operative part says: “The Congress of Deputies ratifies its support for the UN resolutions and the United Nations Mission for the Referendum in Western Sahara (MINURSO), in the conviction that only Dialogue, negotiation and agreement carried out in good faith and in a constructive manner, in accordance with International Law, will help to reach a just, realistic, viable, lasting and acceptable political solution for both parties to the political conflict in Western Sahara” .

However, the socialist deputy Sergio Gutiérrez has made the promoters of the initiative ugly because the explanatory statement is "extremely harsh", since it makes it ugly that a part of the Government has "unilaterally" changed the position regarding the Sahara, among other things. “The fair solution does not have to be anything that we think but the one that the parties are able to agree on in the UN, because it is not our opinions that matter but their decisions. No one is going to impose the future of the Saharawis on the Saharawis”, said the socialist, who highlighted the need to “unlock” a situation that has been “frozen” for decades.