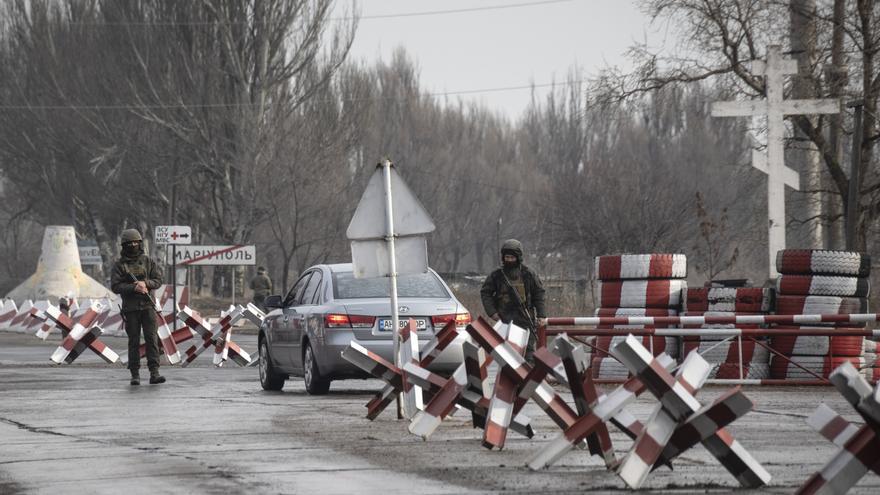 European exposure to the conflict in Ukraine is more intense than that of the United States. The additional economic sanctions to those applied since 2014 by the Russian occupation of Crimea, aimed at strangling Russia's productive activity with greater pressure, are ready and will be massive, according to the head of Spanish diplomacy, José Manuel Albares. However, the consequence of the punishment given the Kremlin's position could cause a boomerang effect on the European situation.

All this, when the manufacturing industry of Germany and France began to wake up from the commercial bottlenecks, the disruptions of the value chains and the virulence of the omicron variant, which has hit especially hard in the two largest economies in the euro .

The Purchasing Managers Indices (PMI, according to its acronym in English) of the consulting firm IHS Markit for January may be prescient. This barometer, which accurately reflects the current situation, rose above forecasts and marked the fourth consecutive month in which the industry and services of both countries settled in positive territory. Phil Smith, associate director of the firm, hit the nail on the head when analyzing the situation: "Manufacturing is on the path to take off in 2022, waiting to be accelerated by the dissolution of the crisis in trade and that business production flow again with enthusiasm", an aspect in which, in his opinion, "there is still ample room for manoeuvre", alluding to the normal reestablishment of the rhythms of industrial and business activity.

Of course, only in case "clouds do not arise over the business climate, which raise production costs," explains Smith. This storm forecast could force the European Central Bank (ECB) to abandon its policy of wait and see, which, for the moment, relegates any rise in interest rates. The issuing body points out that a good part of the rise in prices suffered by the EU comes from gas, since European countries are highly dependent on Russian gas production, and not from an inflationary spiral as a cause of the increase in the cost of living in the currency zone.

Although the person in charge of IHS does not expressly mention it, the high geopolitical voltage in Ukraine is the great risk that hangs over the European economic meteorology, the piece that the Kremlin tries to shake again to catapult energy prices and raise the inflation of the partners the euro and the rest of the EU. Russia is the community club's fifth trading partner. Essentially, due to its status as the leading energy supplier in the internal market. The budding European sanctions actually illustrate the particular European concern about the closure of the Russian gas tap that crosses Ukrainian soil in the middle of the long and frigid winter.

Tim Ash, emerging markets strategist at BlueBay, put it this way on Bloomberg: "European energy prices remain the biggest source of concern" and Vladimir Putin wants "Europe's contemplative silence if it decides to invade Kiev" in exchange for a winter "with assured heating". Hence the insistence of the German Foreign Minister, Annalena Baerbock, that "sanctions will be very effective and efficient against Russia." However, the Russian market is "well prepared", explains Viktor Szabo, manager of the Aberdeen fund, because "it is difficult to inflict damage" on an autarkic economy – especially since 2014 – which "does not feel any harm". Szabo warns: "I would not push Putin to the limit."

This warning is also endorsed by Jamie Rush, economist for Europe at the Bloomberg Economics analysis panel. "Europe is always left alone when its consumers have to pay much more for natural gas and our predictive model suggests that energy prices in the euro area will rise by as much as 1% of its GDP and weigh down its impact on the whole of the exercise".

As if that were not enough, JP Morgan Chase warned of a price of a barrel of crude oil at 150 dollars [ahora el Brent está ya cerca de los 90 dólares] that would hurt growth and spur inflation. The Russian Gazprom and the Anglo-Dutch Shell have disbursed 9,500 million euros in the Nord Stream 2 pipeline, essential to supply gas and crude oil to Germany and its Central European partners. Without territorial interference for Russia – its energy sources were until now channeled through Ukraine and Turkey – the infrastructure would grant full guarantees of supply to Germany, which this year is going to close all its nuclear power plants.

But the 1,200 kilometers long and the 55,000 million cubic meters of annual gas transport of the pipeline – which doubles the capacity of its brother, the Nord Stream 1 – remain in the trigger, despite the fact that Putin expressed on the last day of 2021 that it is "ready to go".

The tactic of incorporating energy as a diplomatic weapon of the first order has been in the mind of the Russian leader for two decades. Moscow has been losing economic muscle in globalization, but oil and gas have given it high geostrategic power. The Kremlin's influence is palpable within OPEC+, with China and in other emerging and developing latitudes where it has foreign interests. After all, the invisible hand of Russia has been behind the triple-digit barrel in the first years after the financial crash of 2007 and in the castling of the oil cartel's objective of sustaining the price above 80 dollars.

In 2014, the Kremlin imposed an autarchy with which Putin has been able to put pressure on energy prices to the point of bringing Europe to the brink of an energy shock that still threatens the take-off of the post-COVID business cycle and has made the specter of stagflation reappear. . The armor of self-sufficiency has, on the other hand, given the Russian economy a certain stability in the face of the pandemic, at the cost of an anemic rate of GDP and an alarming loss of competitiveness.

Russia is less vulnerable to international shocks because it has already settled into economic self-sufficiency over the last six years under constant interventionism. For example, with permanent devaluations of the ruble, which keep inflation under control and have granted it a certain monetary stability abroad. This monetary control, in contrast, makes it less attractive for an investor who compensates with international currency reserves –especially dollars– that come from the energy market. These reserves also serve to meet the budget deficit of its growing military spending. As a former senior central bank and finance ministry official, Oleg Vyugin, admits, "In Russia, we are now protected from external crises and foreign enemies because we have modern weapons and missiles and large foreign exchange and gold reserves."

This Wednesday, Gediminas Simkus, a member of the Governing Council of the ECB and governor of the Central Bank of Lithuania, warned that the European economy could face a "huge" economic loss if tensions escalate further. "We, Europe and the others, have to find a decision that leads to a de-escalation, since further escalation means huge losses, and not only in terms of economic wealth, but also losses in terms of lives," Simkus stressed.

The Biden Administration has threatened to further tighten the sanctions outlined by the US in the event that Moscow obstructs energy transit to Europe through any of the channels. On the table is reducing Russia's ability to trade in foreign currency or raising restrictions on its banks, American diplomatic sources warn. A scenario that Uniper SE, a firm that acquires Russian gas for Europe, does not rule out, but which it considers unlikely, at least as long as Russia "does not want to risk its reputation as a reliable energy supplier to the EU."

But nobody is dedicated to throwing bets on the massive deployment of Russian troops on the border with Ukraine and of NATO within the neighboring partners of the Atlantic Alliance. The drums of war have altered the purchase of gas from Europe, whose imports to the US are being, during the month of January, up to five times higher than those acquired in Russia, according to the Polish media 'rp.pl'. For the first time in history, deliveries of liquefied natural gas (LNG) from across the Atlantic surpass those from Russia.

Given this situation, with the military escalation in the making –Washington has put 8,500 soldiers on high alert– and the diplomatic ties permanently open, the tension skyrockets. In the markets, Axel Botte, global strategist at Ostrum AM (Natixis), highlights that Russian gas shipments to Germany "are at minimum levels", which "harms the recovery", unless the White House further intensifies flows maritime LNG, since Europe "has just extended its financing lines to Ukraine".

The consulting firm FocusEconomics stresses that the Russian economy will barely grow 2.5% this year, without the military escalation, with price rises and a 4.25 point increase in money in 2021. From HSBC they highlight as a measure the threat that the Biden Administration expels Russia from the international payment system, while Sebastian Barbe, of Crédit Agricole, points out that it should not be forgotten that the Kremlin usually falters when its "currently fragile" economy is distorted.

In the geostrategic field, Jonathan Masters, of the Council on Foreign Relations (CFR), recalls that in the background of this confrontation is the rapprochement of Kiev with the West, which has given wings to the reissue of the Cold War despite the "strong ties cultural, economic and political" that Ukraine has had with Russia. Ukraine's request for entry into NATO is the origin of "Moscow's rivalry with Kiev and the Kremlin with the US and Europe." The same theory shared by Michael Emerson, from the Center for European Policy Studies (CEPS), for whom Putin's mere threat of invading Ukraine responds to one of his old desires: to put an end to the soft-power of the EU, first, and to divide then the community club.