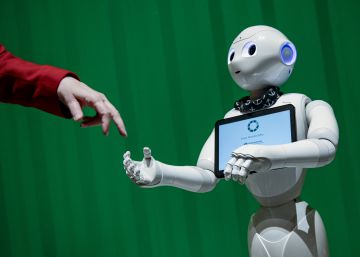 “For you, is innovation something positive or negative?” Is the first of 40 questions that the Foundation for Innovation Cotec has made 2,404 Spaniards between 18 and 65 years. Although the response obtained is positive –73% of the population–, confidence in the digital transition falls 16 points in just two years. In the presentation in Madrid of the III Survey of social perception of innovation in Spain, held this Thursday, the speakers have reiterated that vulnerable groups are the ones that are most restless in the face of technological change. In the segment of people without studies, distrust in the technological revolution has increased by 32% while in that of entrepreneurs, doctorates and other professionals, only 8%. Jorge Barrero, CEO of Cotec, believes that this increase is due to lack of information. “At other times in history, utopia has dominated the vision of the future. Today, dystopias dominate and it has to do with the complex moment of transformation that we are experiencing, ”he adds.

Rosa Díaz, director of the Sigma Dos market research institution, who collaborates with the foundation in this study, explains that it is “very important to see how society has changed depending on the sectors and understand the impact of digital transformation in each group”. Hup to 34% of Spaniards, workers or unemployed, are not trained to face the new digital market that is drawn. The study segments the responses according to the participant’s profile: their age, their sex, their income, where they live and their studies.

For starters, there is a notable difference between women and men. They distrust more than they do in innovation and in their ability to face change. However, half of the citizens (with a majority of men) think that technology will reduce the current gender employment gap and that it will also favor reconciliation with personal life.

Hup to 34% of Spaniards, workers or unemployed, are not trained to face the new digital market that is drawn

In the same line, but with a more pessimistic touch and that also remains stable since 2017, 55% of Spaniards maintain the idea that technology increases social inequality. Those who feel more insecure about it are the “most vulnerable” groups, that is, unemployed citizens, with low-skilled jobs, poor education, low income or inhabitants of small municipalities. To solve this problem, 61% of the population is in favor of establishing universal basic income.

César González, a researcher at Sigma Dos, points out that this survey has enough samples to draw conclusions and that taking into account the size of the participants’ habitat was a key. “It has been crucial to take into account the size of the municipality and the opinion of the inhabitants about whether technology facilitates development in rural populations or not. In my town of San Bartolomé in the Canary Islands they don’t think the same as in Madrid, ”he says. In cities such as the capital and Barcelona, ​​the inhabitants have a much more positive view on the rural environment than the residents of it up to nine points apart.

Citizens between 18 and 29 are more critical of the educational system that does not respond as it is due to the employment demanded and the lack of innovation in Spain. However, they feel more confident to compete in the new market than those over 45. Another fact that draws attention in the Cotec report is that 77% of this group, which was born far from social networks and without a smartphone in the hand, he considers that innovation is positive, while in young people the figure does not exceed 70%.

80% of citizens believe that society is not preparing for the transition, nine points more than last year. In addition, the automation of employment in the next 15 years is a fear that remains in the minds of workers. Half of the population believes that technology destroys more jobs than it creates while another party (48%) is confident that this gap will be compensated by new work. In addition, in two years, the number of citizens who know the concept of circular economy has tripled to 32%.

Despite the improvements, what is clear after the presentation, although there are many variables, is that the Spanish population fears the transition, is more pessimistic than in 2017 and asks the Government for greater leadership and greater commitment to innovation and innovation. development.