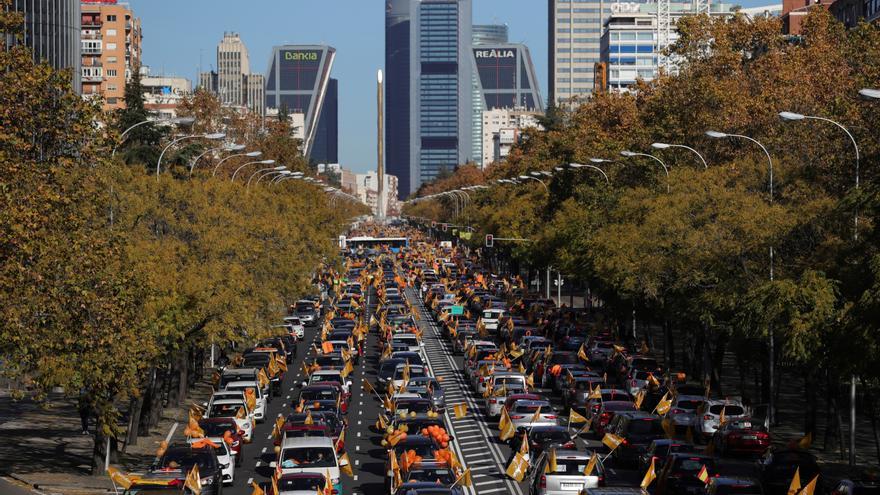 The concerted school took to the streets this Sunday to protest against the new education law. The More Plurals platform, made up of associations of parents of students, unions, companies and different groups in the field of concerted education, have called demonstrations in different cities, in most cases by car, to which they have joined the PP, Vox and Ciudadanos.

The slogan of the protest, ‘For the right to choose the education we want’, appeals again to the same “freedom” that the conservative benches in Congress loudly demanded when the law went ahead this Thursday.

Due to health restrictions to prevent the spread of the coronavirus, the protest has taken place in the form of motorized mobilization throughout Sunday morning in the main Spanish cities, with the exception of the autonomous communities of Catalonia, Valencian Community, Country Basque and the Canary Islands.

In Madrid, the demonstration occupied the path of the Paseo de la Castellana between the Plaza de Cibeles and the Plaza de Cuzco, where thousands of cars decorated with balloons, ribbons and orange banners expressed their disagreement through beeps and pancakes. Although in principle people were encouraged to go by car, in Cibeles, where the reading of the manifesto was organized, there were also quite a few people on foot applauding the vehicles while songs like “I want to break free” played in the background. that enlivened the atmosphere.

Among the protesters were many families who came accompanied by their children to criticize the reform and, especially, to defend concerted education. A mother expressed her concern about the future of this modality: “I can pay for a concerted school, but not a private one, that they raise the fees if necessary, but they do not remove it,” she stated, clarifying that this price increase would not be ideally, “but it could serve as a palliative measure.”

In addition to these protests, the Popular Party has begun a collection of signatures against the new law that, they say, will serve as the basis for the appeal that it intends to present before the Constitutional Court when the law is definitively approved after passing through the Senate . They assure that they have already more than ten thousand supporters in Madrid alone.

The main criticism of the new Organic Law of Modification of the LOE comes from the defenders of concerted education, who affirm that with this educational reform what the PSOE intends is to eliminate this modality. What the norm does is limit some of the practices that have allowed certain autonomous communities to privilege the concerted school over the public one, such as the transfer of public land to build concerted centers. It also prohibits setting up centers that segregate their students by sex and tries to prevent schools from charging fees to families, something that was already illegal but is done regularly under some pretexts or others.