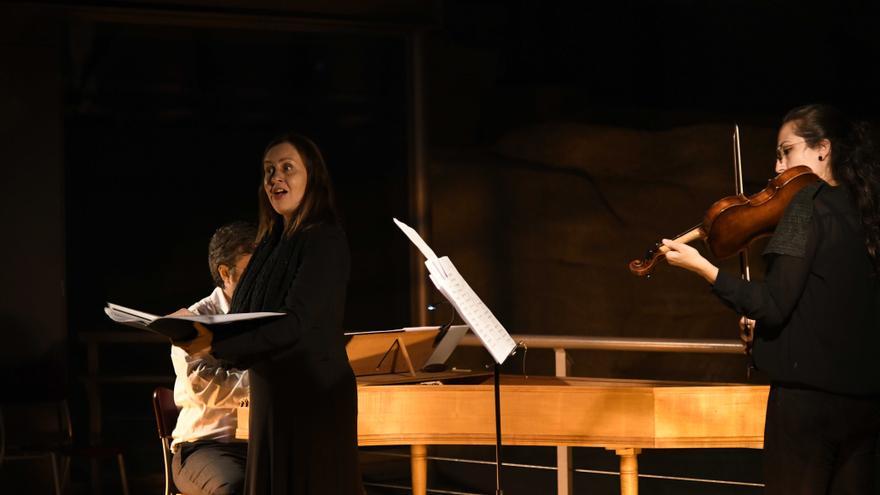 The León y Castillo House-Museum of Telde welcomes on November 27, at 7:00 p.m., the closing of the cycle Islands, sea, music with the concert Joaquín García and the Cathedral of Las Palmas, in charge of the NAO group, made up of the soprano Cristina Barceló Borges, Judith Verona Martín on baroque violin and Vicent Bru Soler on harpsichord.

To attend this concert, with free admission and limited capacity, prior registration is required by calling 928 691 377 or by email [email protected].

This show thus closes this cycle of the Ministry of Culture that proposed a musical journey from Romanesque to Baroque through 12 concerts in six museum centers and that started on October 28. Its musical content was composed, for the most part, by ancient music and performed by specialists in the repertoire. Acerina Cruz (poet) and Vicent Bru (harpsichord), Cristina Alís Raurich (organetto), the NAO group and Vicent La Camera (harp) participated in this music festival.

On the occasion of the centenary of the death of Tomás Morales, his House-Museum not only hosted the start of this festival, but also three of the 12 performances that will take place in the other three house-museums, that of Antonio Padrón, León and Castillo. and Pérez Galdós, as well as the Casa de Colón and the Cueva Pintada Museum and Archaeological Park.

The soprano Cristina Barceló has a degree in Translation-Interpretation and a Degree in Music Education Pedagogy. She began her singing studies at the Conservatorio Superior de Tenerife and continued in Mallorca and Gran Canaria. He has specialized in ancient music by the hand of the soprano Isabel Álvarez and the tenor José Pizarro, participating in the ancient music workshops that Mapfre organizes under his direction, as well as in various specialized courses in ancient and medieval music.

In addition, he has performed in various places in Europe, such as Denmark, Wales and Sweden, at the Ulnis and Föhr Music Festivals (Germany), at the North American Tecla Congress held in Huntsville (USA), as well as in the Festival of Religious Music of the Canary Islands. He has also conducted choirs such as Voices of Tejeda and he takes courses in vocal technique and phonetics applied to singing for the City Council of Las Palmas de Gran Canaria, and combines his artistic work with university teaching at the Faculty of Teacher Training of the ULPGC.

For his part, Vicent Bru (harpsichord / organ) began his musical studies in Valencia and graduated in Zaragoza in the specialty of harpsichord from the hand of Jose Luís G. Uriol, with whom he broadened his knowledge of Iberian keyboard music. In addition, he has specialized in Spanish Renaissance and Baroque repertoire with Montserrat Torrent. He studied harpsichord and organ at the Hoschschule Fuer Künste in Bremen, Conservatoire Royal de Bruxelles, where he has been a student of Frédérik Haas since 2005.

He is also a teacher at the Conservatorio Superior de Canarias and at the Conservatorio Profesional de Las Palmas de Gran Canaria in the specialties of harpsichord and musical language. Artistically, he has performed in countries such as Germany, France, Belgium, Italy, Austria, as well as in much of the Spanish geography. All this is combined with research work, rescuing part of the Canarian musical heritage, such as the work of Diego Durón, of which he has recently made a recording.

As a complement to all this activity, it is worth highlighting its work in the restoration and maintenance of historic organs, collaborating with the Spaeth house, an organizer company located in Switzerland. He currently combines his teaching work with his doctoral studies at the University of Granada and with that of organist at the Church of San Francisco de Asís in Las Palmas de Gran Canaria.

On the other hand, the violinist Judith Verona Martín is characterized by her energy, dedication and enthusiasm for her profession. Not only does he work in numerous groups and ensembles nationally and internationally, but he has also specialized in different branches of music and pedagogy.

Discover his passion for classical music and the violin in Gran Canaria, his hometown, where he began his career at the Conservatorio Superior de Música de Las Palmas with professors Elías Rodriguez and Mariana Abacioaie. He completed his musical training with Enrique Palomares, in Zaragoza, and also in the Netherlands, where he expanded his career with Early Music studies in 2009 with the baroque violinist Antoinette Lohman. In 2011 he obtained the Higher Violin degree at the Conservatory of Tilburg, Holland, with maestro Kees Hulsman.