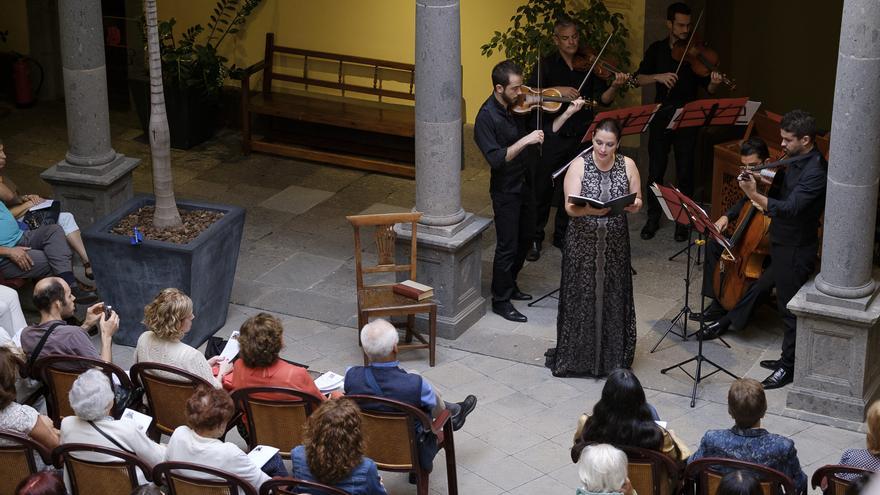 The concert Fairest ilse, around the song with the accompaniment of the lute, the genre of small format most cultivated in the British Isles during the 17th century, closes the sixth edition of the cycle Old music in the Patio of the Casa de Colón, which started last May. ANDThis activity, in which works by John Dowland, Henry Purcell, John Johnson, John Marchant, Thomas Morley, Thomas Robinson, Thomas Ravenscraft and Christopher Simpson can be heard, will be on September 14, at 7:30 p.m.

To attend this last concert of the season, with free admission, prior registration is required at www.casadecolon / activities. Online tickets are already sold out, but the museum center has reserved a percentage of places that are delivered the same day in strict order of arrival until the limited capacity is reached. The show will also be broadcast live on the museum center's YouTube and Facebook Live channels, where it will also be hosted for later viewing.

The soprano Estefanía Perdomo, together with Juan Carlos de Mulder, with the Renaissance archlute and lute, and Carlos Oramas, with the Renaissance theorbo and lute, will perform several songs of this genre, which had the composer John Dowland as its main representative, with a extensive production, and later to Henry Purcell, at the end of the century, who continued to provide music for voice and accompaniment. It is about music where the text takes on a special relevance and in many of the cases linked to the theater.

Among the songs that can be enjoyed will be To Fancy, by John Marchant, Come again and Flow my tears, by John Dowland, 'A Toy' by Thomas Robinson, Three ravensby Thomas Ravenscraft, Short Allmain, by John Johnson, and Bess of Bedlam, Music for a while and Fairest Isleby Henry Purcell.

With this concert this year closes the cycle devised for music lovers to come to the Casa de Colón and enjoy, with the ideal environment and acoustics provided by the patio of this Americanist center in Vegueta, eternal melodies interpreted by great professionals of early music in the Canary Islands.

The sixth edition of this initiative, more than consolidated in the cultural agenda of the Casa de Colón, with a loyal audience, which has reaped audience and critical success, consisted of four concerts. The three concerts already held completed the capacity, reduced, and were enjoyed by more than 250 people.

The soprano Estefanía Perdomo, was born in Las Palmas de Gran Canaria and graduated from the Superior Conservatory of Music of Las Palmas with Honors, studying with Professor Mario Guerra León. Subsequently, he began postgraduate studies at the Royal Conservatory in The Hague (Netherlands) with professors Sasja Hunnego and Barbara Pearson and finished with the highest marks a master's degree in opera at the Dutch Opera Academy (Amsterdam). She also has a degree in History from the University of Las Palmas.

He has carried out intense international concert activity in the most varied fields: opera, early music, recital, symphonic repertoire and contemporary music with orchestras such as the Gran Canaria Philharmonic, Het Residentie Orkest, Noord-Holland Orkest, and La Principessa Filosofa, among others. .

For his part, Juan Carlos de Mulder, originally from Lima, studied at the conservatories of Madrid, The Hague and Toulouse. He has worked as a specialist in antique plucked string instruments and as a continuist in baroque opera and oratorio productions under the direction of musicians such as Philippe Herrewege, Jean Claude Malgoire, Nigel Rogers, Jordi Savall, Eduardo López Banzo, Enrico Onofri and Diego Fasolis.

In the field of chamber music, he has collaborated with Albicastro Ensemble, Hesperion XX, La Romanesca, Orphenica Lyra, Accademia del Piacere, Speculum, Musicos del Buen Retiro, Real Camara, Trulla de voz, Capella de Ministrers and La Capillla Real. His extensive concert career has taken him to the most prestigious venues in Europe, America and Asia. Likewise, he has participated as a lute player in more than 80 recordings of early music from the Middle Ages to Pre-Classicism.