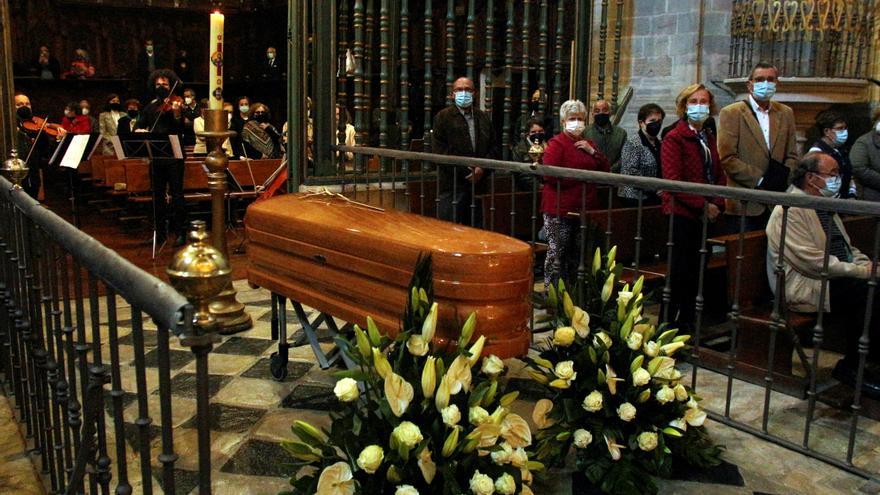 Before the coffin with his remains was transferred to the cemetery, the funeral was held in the Collegiate Church of Villafranca, which, among other authorities, was attended by the Minister of Culture, José Manuel Rodríguez Uribes.

The minister has revealed before the funeral that the Government of Spain is already studying the way to "project the memory" of the composer "towards the future" and "thus honor his figure and legacy."

"He was director of the National Orchestra of Spain, academic of Fine Arts, medal of San Fernando, awarded worldwide and, therefore, recognized, and what we want is to fire him as he deserves," he added.

The minister has conveyed to the children of Cristóbal Halffter the Government's interest in honoring his memory because "he is one of the greats" and in working so that future generations "may know his extraordinary legacy that must remain and be known."

Alonso Halffter, the composer's eldest son, thanked the family for the countless expressions of support and affection received since the death of his father was known on Sunday.

"My parents made a great effort to defend and promote the Bierzo region and now their neighbors return it in the form of affection," he said.

With the death of Halffter, Spanish music loses one of the main defenders of its distinctive character, but not on the nationalist cliché that it always rejected, but on going to the true bases to modernize it.

In this regard, he recognized the paradox: "I am an avant-garde musician who reclaims tradition," the 2010 winner of the BBVA Foundation Frontiers of Knowledge Award told Efe, one of the many awards he received in life for all the world.

Halffter was one of the most prominent composers of the Generation of '51 and showed a total commitment to music throughout his life.

Born in Madrid on March 24, 1930, he was the nephew of composers Rodolfo and Ernesto Halffter and in 1936 he moved to Germany as a result of the Civil War to return to Spain in 1939, where he began his music studies on his own.

From 1951 he made his first premieres and in 1952 he gave his first concerts as a conductor, while his role as a composer addressed various genres, from choral, chamber and electronic music to writing for symphonic training.

Among his most relevant compositions are "Elegies to the death of three Spanish poets" (1974-1975), dedicated to Antonio Machado, Miguel Hernández and García Lorca; "Three poems of the Spanish lyric for baritone and orchestra" (1986) or "Mural sonante" (1993), which show constant references to Spanish culture.

Already in the final stage of his life, in 2018, he composed a work in memory of little Gabriel Ruiz, El Pescaíto, the boy who disappeared and was murdered in Almería by his father's partner, because of how much the event had impressed him , as explained.

Halffter spent the last years of his life uninterruptedly in the town where he was buried this afternoon and she liked to return when, due to her professional commitments, she traveled continuously around the world.

Halffter died in the castle of the Marquises of Villafraca, an imposing construction in which he lived with his wife, the pianist María Manuela Caro, familiarly known as Marita, who died in that same place on December 18, 2017 at the age of 85. and next to the one that has been buried today.

The composer's wife inherited this castle-palace, which dates from 1515 and was declared an Asset of Cultural Interest (BIC) in 1949, as a descendant of the Marquis of Villafranca, and it became the family's refuge.