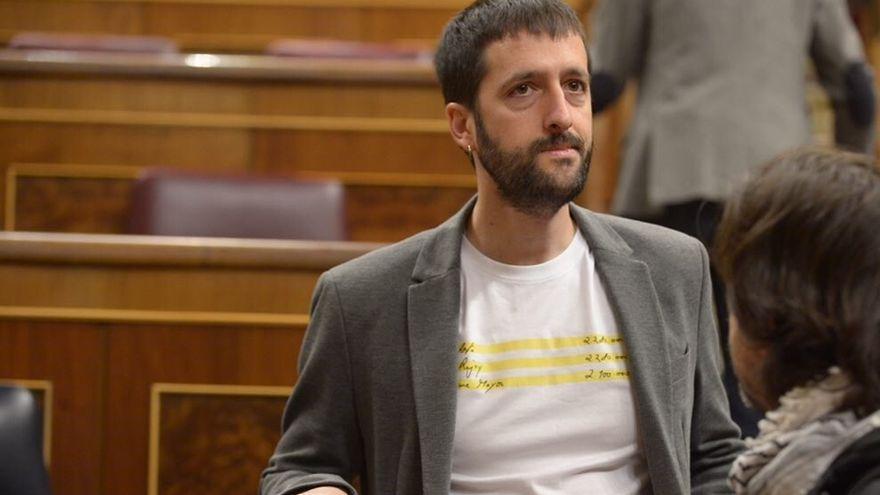 The complaint For alleged crimes committed in the Podemos administration presented by José Manuel Calvente, a lawyer who worked in the party since its foundation and until he was fired last December, he will take part of the training leadership to testify before the judge next month of November.

The head of the Court of Instruction number 42 of Madrid, Juan José Escalonilla, has cited as investigated for the 20th of that month one of its main leaders, Juan Manuel del Olmo, Secretary of Communication and responsible for the last two electoral campaigns. On the same day, the manager, Rocío Esther Val, and the treasurer, Daniel de Frutos, are summoned, as recorded in a car of July 30, advanced by Public and to which elDiario.es has had access. In another subsequent letter, dated July 31, the magistrate also cited Andrea Deodato, a party worker, as investigated. In addition, Pablo Fernández Alarcón, former manager and head of human resources, is cited as a witness.

The magistrate has not detailed to date in his briefs what are the indications that they send to the investigated ones and he limits himself to citing them “in view of the content of the statement” of the lawyer and of what is stated in the complaint that he filed in December 2019 before the Civil Guard. Sources from Podemos consider that the judge is conducting a “prospective investigation.” In other words, carrying out procedures “assuming the guilt of those investigated from the beginning of the investigation” with the aim of “making a media case that lasts for months, although then legally it comes to nothing,” these sources say.

In addition to the party leaders, the judge has also summoned two high-ranking officials of Neurona Comunidad SL, a political communication company that has worked on several Podemos electoral campaigns, as investigated. The judge has focused on the work that this consultancy and another called ABD Europa LDA – located in Portugal – did for the training in the elections of April 28, 2019. Thus, he asks the Judicial Police to identify all the payments made to both commercial and to the party that contributes the work carried out. It also asks the banking entities Bankinter and BCP Millenium to send documentation of the accounts of both consultants.

Among the tests requested, the magistrate also asks the Police to “examine” the account attached to the so-called Caja de Solidaridad de Podemos – a kind of fund to which the party leaders donate their salaries – to determine “if it was reached to pay the 50,000 euros to the natural or legal person behind # 404 Comunicación Popular ”.

On the other hand, it also asks the party to provide the “internal regulations” on the salaries and supplements that its employees receive and asks the manager and the treasurer to present the “invoices, tickets and other documentation” that determined that “they will be paid monthly an amount for expenses in the exercise of their functions ”, as well as their payroll from January 2019 to the present.

Another of the proceedings is sent to the Madrid Mercantile Registry, which is requested to “report on the mercantile companies in whose administrative bodies Juan Carlos Monedero is present.” Although he has always been in the back room of United We Can, Monedero left the party leadership and the first political line in 2015. Recently appointed director of the 25-M Institute Foundation, linked to training since birth.

Likewise, the judge seems to want to investigate the works of the building that the party bought in the Ciudad Lineal neighborhood (Madrid) and where your state headquarters is located. Thus, it has cited as witnesses the architect who carried out the project to reform the property and the legal representatives of six supply, carpentry or air conditioning companies that participated in the works. It also asks the party to provide the work execution contracts that it signed with the architect and the rest of the merchants, as well as the invoices issued and the “accounting and banking documentation” that certifies the payment of the same.

Complaint before the Civil Guard

The judge agreed to all these proceedings between one and two days after taking a statement from Calvente, who appeared in court on July 29. The lawyer had presented in December of last year before the Civil Guard Command in Barcelona – where he resides – a complaint of more than 40 pages in which he describes some facts to which he assures he began to have access in mid-2018 in the fiscal year of his position as head of data protection and security of confidential party information and targets various employees and party leaders.

That same month, he had been fired from the party following the complaint by lawyer Marta Flor for sexual harassment. That case was provisionally shelved on July 29 after Judge Rosa María Freire took statements from both. The magistrate considered that it has not been proven that the crime had been committed “in the absence of evidence of any sexual favor, nor any objective intimidating, hostile or humiliating situation towards the complainant by the defendant.”

Calvente qualifies the events described by himself as illegal financing, money laundering, unfair administration and disclosure of secrets. With the lawyer’s complaint, the Civil Guard prepared a report that it sent to a Martorell court, reducing possible crimes to misappropriation of public funds and unfair administration. This court, with the parenthesis of the health crisis, ended up being inhibited in favor of the courts of Plaza de Castilla de Madrid due to a matter of jurisdiction and the matter fell by division in the Court of Instruction number 42 of Madrid, which opened proceedings for the alleged crimes of embezzlement and unfair administration.

Calvente’s is not the first initiative in the courts against the Podemos leadership for its alleged irregular financing, although so far none has had a judicial journey. In 2016, both the National Court and the Supreme Court rejected the complaints filed on the basis of the so-called PISA report, a document without the stamp of any police unit or official signature, which was published days after the formation broke into Congress for the first time with 69 seats at the end of 2015. Since then, the party has sought in the courts the origin and specific authorship of this report, which has been attributed to the political police that housed the Ministry of the Interior between 2012 and 2016, during the first term of Mariano Rajoy.

In addition, recently, the Spanish Data Protection Agency (AEPD) filed a complaint filed by Calvente against the party’s current Organization secretary, Alberto Rodríguez, and the manager, Rocío Esther Val, for alleged interference in his work as a Protection delegate. of Data, as advanced infoFree. The lawyer accused both leaders of having committed “certain acts in the performance of their functions” that could have constituted a “serious violation” of the Organic Law on Data Protection (LOPD). The resolution of the body directed by Mar España filed the complaint alleging that Calvente had not provided “any proof” that said violations had occurred. In other words, there was no evidence that they had occurred.