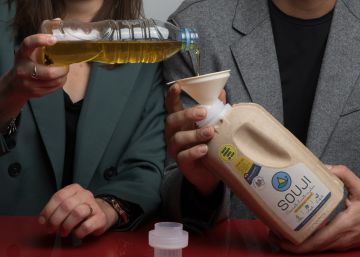 So you can make soap from recycled oil is not a novelty. In fact, in Spanish villages it used to be a common practice. The oil was heated, caustic soda was added, stirred for two or three days and a lumpy detergent was obtained ready to use. What is new is to have the same result in less than a minute and without contact with corrosive vapors. "The process was very tortuous, and for the pace of life that is currently being carried out, it was complicated, ”explains Catalina Trujillo, one of the founders of Souji. “What we wanted to do is to sophisticate that process and achieve the same result, with a better aroma, with a softer and more liquid texture and in a minute. Without any corrosive agent or danger of manipulation, ”he adds.

The idea goes back to 2015, when Sergio Fernández, co-founder of the company, was preparing to pour the oil used by the sink. "I knew the consequences of what I was doing and an alarm sounded in my head," confesses the environmental engineer when referring to the maritime pollution that causes. The solutions to this problem in the market they were limited and the couple decided to hire an engineer to create a formula to produce a detergent from used oil. After two and a half years of research, in 2017 they launched Souji, a chemical component that, when mixed with vegetable fat, creates a soap that can be used for household cleaning, laundry detergent, dishwashers and floor washers.

They started selling the product through their website and continued from large platforms, such as The Biosphere of El Corte Inglés, Bio c’ Bon, Carrefour Bio, Herbolario Navarro and stores that sell in bulk. They are currently in more than 60 physical points of sale in Spain and in 2018 they invoiced about 20,000 euros, a figure that was already tripled in the first quarter of this year. They want to go one step further and for this they are investigating two alternative formulas: one that allows to obtain the same amount of soap with a larger volume of oil – with which more oil would be recycled -, and another to generate industrial quantities that will serve, by example, in hospitality. “We want to make a formula that recycles a minimum of 200 liters of oil at a stretch in a large agitator, mechanizing the process. This would be a real alternative for waste recyclers that make biodiesel with oil, so that they can apply a more sustainable, economical and cheap and less polluting process, ”explains Fernández.

From the beginning they were financed with their own funds and, because they still invest heavily in research, they have not yet come out of losses. For this reason, none has been able to quit their jobs altogether: Fernández as head of purchases of a cardboard and Trujillo company, who resigned from his position in a marketing and communication training agency to devote more time to the project, offers papers and gives punctual classes. At the moment they are the only workers of Souji.