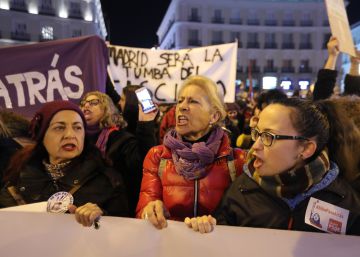 The Community of Madrid has cut up to three quarters of the subsidy that it had already been giving to two state organizations of women working against sexist violence, two of the pioneers in comprehensive care for victims. The Federation of National Associations of Separated and Divorced Women (FAMSD), whose origin dates back to 1973, has received 75% less; and the Federation of Progressive Women (FMP), with three decades of work, 33.85% less. Ana María Pérez del Campo, the director of FAMSD, regrets that suddenly there are "diminished" projects already settled for those who had never had problems in financing: "The previous year, for the same purposes, we were granted almost all of what we had asked for. "

This year, in the federation headed by Pérez del Campo, of the 237,661.29 euros requested in 2018 for the team that directly addresses the victims of sexist violence in the center of integral recovery for these women, unique in Spain and in operation since 1992, the Community granted them 53,557.59 euros – the previous year was 212,664.49 euros for the same purpose – and four people have already lost by this cut. In the FMP they have lost six. The Community gave 433,269.58 euros of the 1,654,734.41 million euros requested for 17 programs related both to direct attention to victims and to different areas of sexist violence; the previous year they had received 655,001.84 euros for the same projects. .

“Suspect” is the word used by Yolanda Besteiro, the president of the FMP, which has a network of more than 23,000 people. For Ana María Pérez del Campo, this is "intolerable." "I will not consent, no matter what." And the two refer to the change in management of these grants, which are made with charge to 0.7 of personal income tax. In January 2017, that model changed. The financing ceased to depend entirely on the State and was divided: the new criterion established that the central government would distribute 20% of the funds and the autonomous communities 80%. “Since then, it is the regional governments that have the bulk of the money to distribute and it is the one that is dedicated to direct attention to the victims. The central government has never stopped subsidizing, even now with this new management model. They continue giving the same money (in the last ten years, between 640,000 and 650,000 euros per year to this organization and for that purpose, the house for the recovery of the victims), ”explains Ana María Pérez del Campo.

Although the two organizations continue to receive a state subsidy, this comprehensive care and the programs associated with it are diminished or disappear if they do not receive funding from the Community. Both spokesmen assume that the background is "ideological". "It's funny," says Besteiro, "that we withdraw the money just when the government is negotiating with a party that denies sexist violence." It refers to the formation of the autonomous government after the last elections, in May. Last August, Isabel Díaz Ayuso, of the Popular Party, was inaugurated president of the Community with the votes of Citizens and Vox. Then, he said publicly that he would comply with the programmatic agreements he acquired with Ignacio Aguado, of Cs, and with Rocío Monasterio, of the far-right party. Besteiro and Pérez del Campo share the "feeling" that "something has to do".

When Ana María Pérez del Campo approached the Ministry of Social Policies, Families, Equality and Birth, on which these grants depend, to ask why the funding fell in almost three quarters having the same project and with the same objectives. The answer was something like "I have not been." From the current Ministry he was told "that it had been the previous Government" and that "do not worry" because there was going to be an extraordinary call in which they could "make up for how short they had remained in the ordinary". That did not happen. They presented the project again for that extraordinary one and, Pérez del Campo says, they were granted “zero”. They put a remedy of replacement on July 2 to which the regional administration has not yet replied. Pérez del Campo, born in 1935, grabs his hands, with the nails of a pale violet, and crosses his legs: “I've been fighting all my life and I plan to continue doing it. Nobody is going to shut me up and I'm not going to stop. ”

Something similar has happened to the FMP. He also presented a project for the extraordinary, last March, because they did not obtain “sufficient funding in the ordinary 2018,” explains Besteiro. They requested 215,985.72 euros to reinforce six of the 17 programs they have underway. The Ministry denied them the money of that extraordinary claiming that "the certificate issued by the Secretary of State for Social Services and Equality in relation to the Resolution of May 18, 2016, does not validly accredit the territorial scope of the subsidized projects" . Besteiro is blunt: “It is not true. The certificate is valid and we have made it known with a replacement resource ”. He was filed on July 9. "Against the resolution of refusal of the subsidy on the basis that it meets all the necessary requirements and also presents a new certificate." They still haven't had an answer.

From this counseling, the first thing they say is the same thing that Pérez del Campo was snapped, that "this comes from the previous Government." Then, having more social agents in the last year have had to "distribute the money among all of them, so it has been cut to all, not only to these". The president of FAMSD says that this is "impossible": "To request a subsidy you have to have a certain period of exercise, so it has nothing to do with more, because those new allegations could not do so yet." Then, the regional government explains that there are no relevant certificates from the Ministry of Health that prove that, even if they are state-level, they have action in the Community of Madrid, which is mandatory to receive the subsidy. Denies it Yolanda Besteiro, which shows said certificate, issued by the ministry.

The next thing the Ministry argues is that "the processes (the replenishment resources that both organizations have presented) are still open." And finally they add: "It is a problem and the director (Alberto Reyero) knows it. It is among his objectives to solve it. He will meet with all the entities and platforms of the Third Sector to, among all, reach an agreement by which a fair and equitable distribution is made. We must get the formula to make new bases for the next call. "

Besteiro's concern is, for now, what will happen this year. Whatever happens, the programs for those who requested the subsidy are going to be diminished. The budget for this extraordinary call has to be executed in 2019. If they are told yes finally, something that "doubts", they would not have time to execute the programs and would have to return said subsidy. If they say no, “there will be women who are left without attention.” For Pérez del Campo it is similar. From the integral recovery center they have had to leave a psychopedagogue, an educator and two psychologists. “Losing those specialists, who are the working directly with victims means weakening the fight against sexist violence. And that … We are not willing to do that, ”says Pérez del Campo.