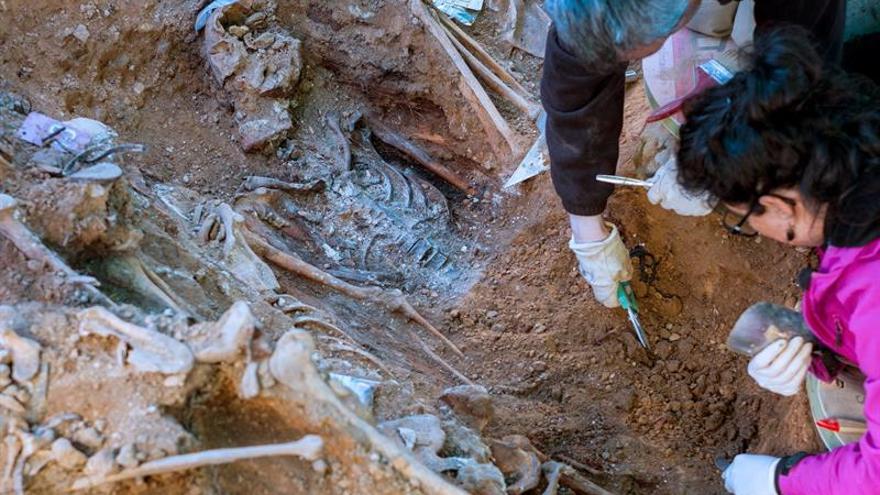 The Government has made effective the transfer of 2.3 million euros to the autonomous communities for the search and identification of people disappeared during the Civil War and the dictatorship and the dissemination of historical memory. The resolution, which has already been published in the State official newsletter, plans to carry out 190 actions, the vast majority exhumations of graves, but also investigations, studies or dignification of burial places and promotion of places of memory. The total game, agreed last March In the first Sectorial Conference of Democratic Memory, it amounts to three million euros, but not all communities have yet presented projects.

In this first loan remittance, each community has received what was agreed in the meeting, in which the distribution criteria were discussed and unanimously approved. It is part of the “shock plan” promoted by the Government after the economic oblivion of the time of Mariano Rajoy, with which it is expected to open in four years 557 graves that are pending intervention, so not all enter this first year. After the sectoral one, the communities have been presenting their projects to be financed, which have been discussed with the Ministry of the Presidency. There are two communities, Madrid and Murcia, that have not yet done so, while the process has been delayed in the case of Andalusia, which is not in this resolution either but whose projects have already been approved and will be announced shortly, according to sources of negotiation.

The Community of Madrid plans to do it around the summer, in September, explain sources from the Ministry of Justice, who link the delay to the regional elections on May 4 that culminated in the inauguration of Isabel Díaz-Ayuso. The presentation of projects “caught us in office,” say the same sources, who allude to a “total predisposition” and recall that their vote in the sector was favorable. In the case of Murcia, it does not seem that there is the same interest. Sources from the Ministry of the Presidency settle the matter by assuring that “there is no request by any association or group to intervene in any grave, nor is there a legal obligation to do so”, and assure that “concern and priority has been focused on tackling COVID “since its inception.

From the Ministry of the Presidency, Relations with the Courts and Democratic Memory, now in the hands of Félix Bolaños, they frame the process in a negotiation scenario “with total normality” because “the projects are highly identified and what remains are issues very bureaucratic, “so they expect them to” come out very quickly. ” Asked about the specific case of the Region of Murcia, the same sources explain that “they have accepted the funds and, since they have not said otherwise, we are waiting for their proposals.”

Andalusia is not part of this first package either, but unlike the previous ones, the project proposal was presented by the Board two months ago. “Due to its size and the high number of graves, the agreement required much more study and precision,” say sources from the Ministry of Culture of the Junta de Andalucía. After negotiations with the Ministry, an agreement was reached a little over a week ago, so the resolution will be published in the BOE “in the next few days.”

Therefore, to those 2.3 million euros transferred, it will be necessary to add the 507,000 euros that correspond to Andalusia. It is the community that will receive the most amount, and also the one with the most graves pending intervention (137). It is followed by Catalonia, with 336,000 euros and 88 pending graves, and Comunitat Valenciana, with 283,000 euros and 70 graves. Madrid has 64,600 euros and Murcia 60,800 euros; Both are two of the communities in which there are fewer graves without intervening, with four and three respectively, but that they are not on the Government’s map today does not mean that they do not exist. An example is what has happened precisely with the Community of Madrid, where the society of archeology and anthropology that has obtained a grant from the Presidency to expand the study has already found 150 more.

The total item is divided into two financing channels: two million euros for the location, exhumation and identification of people who disappeared during the Civil War and the dictatorship, and the remaining million for outreach activities, dignity of burial sites and promotion of places of memory. This last point includes various projects such as the seminar on repression of homosexual people or the study on the Aragonese buried in the Valley of the Fallen that Aragon plans to launch, which receives 196,000 euros; the meetings, talks and placement of commemorative monoliths that La Rioja plans to make in eight graves already exhumed or the preparation of the memorial project in the Mahón Cemetery (Menorca) that will be carried out by the Balearic Islands.

For the exhumations, the agreement allocates an average of 14,360 euros to each of the graves, an amount that the associations that have been carrying out exhumations and identifications of the remains consider low for all the costs involved: travel, specialists (anthropologist, archaeologist, geneticist, historian), machinery, days of excavations, sometimes trial and error until the burial is found and then the analysis of the bones and DNA matching studies with the relatives to try the identification. Taking as an example a recent public tender of the Balearic Government, if it were a grave with a single person in it and it was carried out in a single day, the cost of these actions would be 15,000 euros, but that is not the only typology and there is graves with multitudes of buried.

The plan is not without criticism from some memorialist associations. This is the case of the Association for the Recovery of Historical Memory (ARMH), which has been working for two decades to recover and dignify the disappeared, both through aid in the time of José Luis Rodríguez Zapatero and only with its own resources when he governed the PP. On this occasion, explains its president, Emilio Silva, the association has not participated in these grants because it does not agree with the model: “Human rights cannot have a limited budget or be channeled in this way, subject to the ideological criteria of communities autonomous communities and city councils that want to collaborate or not. They have turned the graves into objects that seem to be there by accident, as if they had not been forced disappearances. When you make a right depend on political configurations and subsidies, it is no longer so “.

Silva recalls that the UN criticized the subsidies that were given to the PSOE government as “a privatization” of the exhumations, as the burden fell on associations and the victims themselves. And he gives an example of the model that in the opinion of the ARMH should govern throughout the country, that of Euskadi, which has Gogora, the Institute for Memory, Coexistence and Human Rights, to which victims who seek to missing relatives. “In that case, it is not activists or associations who are trying to find out and investigate, but it is a duty of the institute, and if a grave is found it is automatically exhumed, a subsidy is not expected,” says Silva.

Along with the 190 actions that are planned to be launched with this credit transfer are the 114 exhumations and many other dissemination works that inaugurated “shock plan” 2020-2024 activated by the Government. Then there were 1.5 million euros in aid channeled through a double channel, direct from the Ministry of the Presidency and managed through the Spanish Federation of Municipalities and Provinces (FEMP). According to calculations by the Executive, the plan will allow the recovery of between 20,000 and 25,000 corpses of the disappeared.