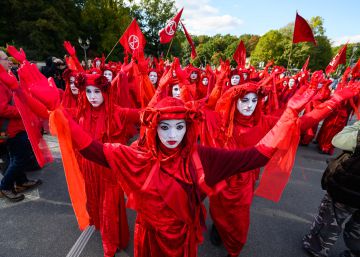 Ecology is not the only thing that groups have to think about climate change. Having a strong presence in social networks and attracting attention during demonstrations is also on the agenda. Extinction Rebellion, he nonviolent civil disobedience activist movement created in 2018, knows the other edges of this environmental struggle very well.

This Monday, they have organized protests in more than 60 cities worldwide. In Madrid, several hundred activists have cut the bridge of Raimundo Fernández Villaverde and, simultaneously, another group has camped indefinitely in front of the Ministry of Ecological Transition. In addition to the characteristic red clothing of Extinction Rebellion, which on Monday flooded large capitals such as Berlin, Sydney and London, blue and beige predominated in the Spanish protests. According Nicolás Eliades, communication coordinator of this group, the colorful brigades symbolize "the evils of the climate crisis": The death of the species, the rise in sea level and desertification.

Eliades explains the intention behind the war's origin of the term. "The idea is to reappropriate the language to use it for a peaceful purpose." The clothing aims to avoid the blood of the species that are dying as a result of the climate and ecological crisis.

This initiative arose spontaneously at the protest event in London fashion week at the beginning of the year. In that event, given the theme, they decided to "put imagination and art" into the costumes. Eliades recalls the great visibility he gave them and blames that event on the creation of new "brigades".

It arises in Barcelona in the middle of the year due to concerns about the rise in sea level. The blue color represents the "fury of the oceans" and aims to make visible the impact of melting glaciers. "It represents that the sea rises and we with it," he explains.

Inspired by the red brigade, they added the blue one. They used papier-mâché and scraps of donated and recycled fabrics to recreate marine animals. "We have represented marine aquariums and other species that we are killing."

"This is the brigade. It represents the desert sands that will come and that will bring rags and misery," says Eliades. It premiered this Monday in the Spanish protests although it emerged a couple of months ago in the Mallorca group. "They have always been a very artistic movement and they manage to mobilize the rest," he adds. As a symbol of desertification, several protesters who could not come to the protests have been sending costumes for weeks to be on time.

"We want to approach society not only since the protests. And there are things that only achieve something soft and done with love, like art," adds Eliades. "It is one of the ten principles we have to achieve our goals: connect with people. And we are seeing that it is one of the most effective ways, "he concludes.