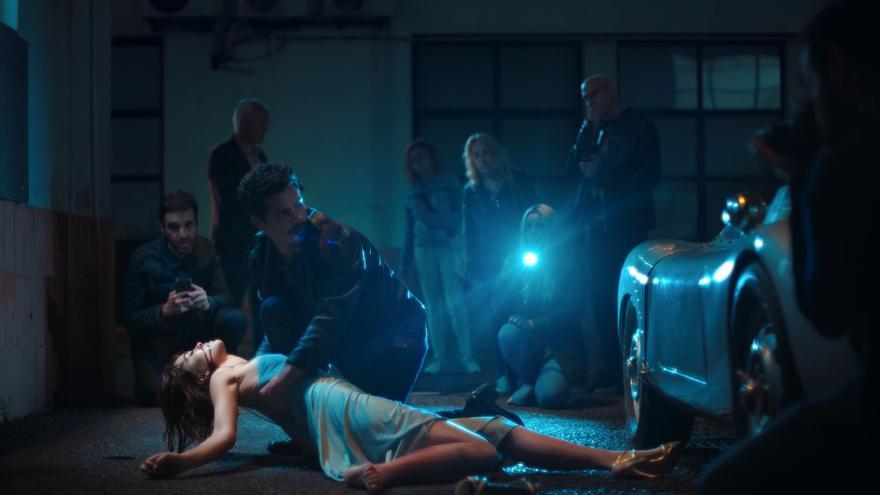 The Casa de Colón inaugurates its cycle Colon Cinema of this year screening, on January 27, starting at 7:00 p.m., the recent film by the young Portuguese director Carlos Conceição, Um fio of Scarlet Baba, a unique example of the suspense genre endowed with an avant-garde aesthetic proposal. Participation in this activity, promoted in collaboration with the Vertigo Cinema Association, is free of charge, although it requires prior registration on the museum center's website, through the link www.casadecolon.com/activities.

Um fio of Scarlet Baba, 59 minutes long and filmed during 2020, it fully introduces us to the suspense genre and is presented as a 'giallo' postmodern that hijacks our minds and senses to introduce us to the world of Candide, an imperturbable and seductive serial killer who one night runs into a woman who has just jumped from a building and who asks for one last kiss before dying. That instant price manages to be caught on camera and makes him a phenomenon on the networks, thus beginning a flight forward with an uncertain end.

Carlos Conceicao (Serpentarium), one of the most exciting voices in contemporary Portuguese cinema, introduces us with this work to a subversive and fetishistic universe, with a young cast, but which includes a cameo by Leonor Silveira, an iconic actress from Oliveira's cinema. During the pandemic, the film caught the attention of the jury and the public at the Seville Film Festival, where it managed to win the award for best direction. He has also achieved other recognitions at the Festival du Cinema de Brive, France, at the Atlántida Film Fest, the Sicilia Queer International LGTBT & New Visions Filmfest and at the Curtas Vila do Conde International Film Festival, in Portugal.

Organized by the Casa de Colón in collaboration with the 'Vertigo' Cinema Association since 2010, the 'Colón Cinema' cycle offers the public a program for disseminating and promoting the cinematographic offer of Latin America, through the exhibition of a great diversity of works of all times and genres.

Carlos Conceição was born in Angola in 1979 during the Cold War and lived between the deserts of the south and Portugal until he enrolled in the Lisbon Film School in 2002. Before that, he had studied Romantic English Literature. His first short film, 'The Flesh', received the Best New Talent Award at 'IndieLisboa' in 2010, while 'Versailles' (2013) premiered at the Locarno Festival. So much 'Goodnight Cinderella' (2014) as 'bad bunny' (2017) premiered at Cannes Critics' Week, and 'Serpentarium' It had its premiere at the Berlinale, being awarded at 'DocLisboa', among other festivals. Conceição has also been the subject of comprehensive retrospectives of his work at the French Cinematheque and at the Amiens Film Festival.

Giallo cinema has its origins in literature, specifically in the publications of the publisher Arnoldo Mondadori. It all begins in 1929, when it is published Gialli Mondadori, a series of books devoted to detective and crime novels. The series consisted of the translation into Italian of novels by Agatha Christie, Ellery Queen, Edgar Wallace, Ed McBain, Rex Stout or Raymond Chandler.

The term 'giallo', which in Italian means yellow, comes from the color of the covers of these novels that told stories of crime and mystery and that achieved great acceptance in post-fascist Italy. Due to its success, many publishers of the time imitated Mondadori and even copied the yellow color of their covers, with which it became an identifying color of the police or mystery novel. The term 'giallo' even became a colloquial expression defining a mysterious or unresolved situation.