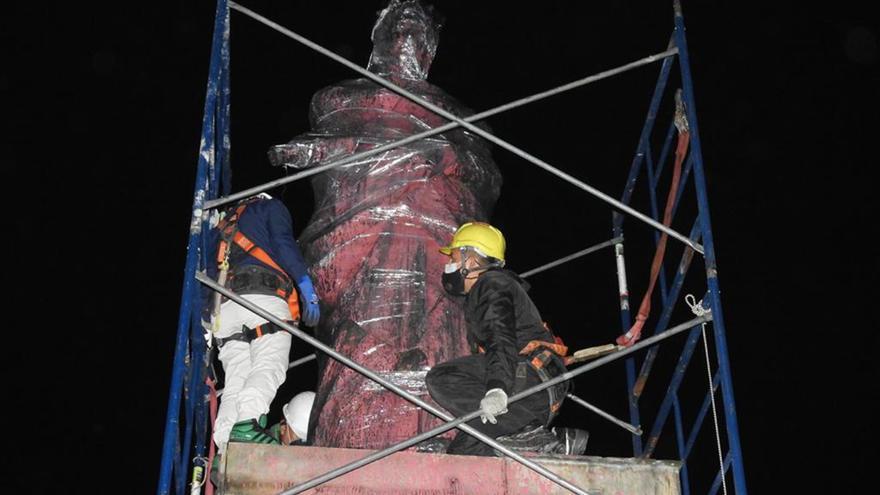 Bogotá, Jun 11 (EFE) .- The Colombian Ministry of Culture removed from their pedestals the bronze statues of the "Monument to Isabel la Católica and Cristóbal Colón", located near the El Dorado international airport in Bogotá, after week misak indigenous will try to demolish them.

The decision to dismantle and move the statues of Columbus and Isabel I of Castilla "was adopted with the aim of opening a dialogue through which the Ministry of Culture will invite reflection on the meaning and value of cultural heritage," said that portfolio in a statement.

Last Wednesday, during the so-called "taking of Bogotá", which was attended by only a few hundred people, Misak indigenous people tried to tear down the two statues, after a few weeks ago they knocked down that of the Spanish conqueror and founder of Bogotá, Gonzalo Jiménez de Quesada, and have carried out similar actions in other parts of the country.

The Misak, who mainly inhabit the department of Cauca (southwest), also demolished on September 17 of last year in Popayán, the regional capital, the statue of Sebastián de Belalcázar, founder of that city, and on April 28 that of the same conqueror in Cali, capital of Valle del Cauca.

The Ministry of Culture indicated that the sculptures of Colón and Isabel la Católica were declared an Asset of Cultural Interest of the National Scope in 2006 and will remain in the custody of the Government.

Along these lines, the transfer is the starting point to initiate dialogue tables, which will have the support of regional authorities, to reflect "on the meaning and value of cultural heritage, in particular, of the monuments that are part of the public space".

"The dialogue tables will be the opportunity to install the subject on the academic agenda and in other feasible spaces, where it is possible to create an open and public dialogue. These spaces for consultation will allow understanding, evaluating and agreeing on proposals for resignification or relocation," he said. the Ministry.

The "Monument to Isabel La Católica and Cristóbal Colón", inaugurated in 1906, is made up of two bronze sculptures by the Italian sculptor Cesare Sighinolfi.

The statues of the Queen of Castile and the discoverer of America, from which Colombia took its name as a country, are located opposite each other at the ends of a small square located on Avenida El Dorado.

Since it was inaugurated, 14 years after the IV Centenary of the Discovery of America, the monument has been in different places in Bogotá, and in 1988 it was moved to El Dorado Avenue to commemorate 450 years of the founding of the city.