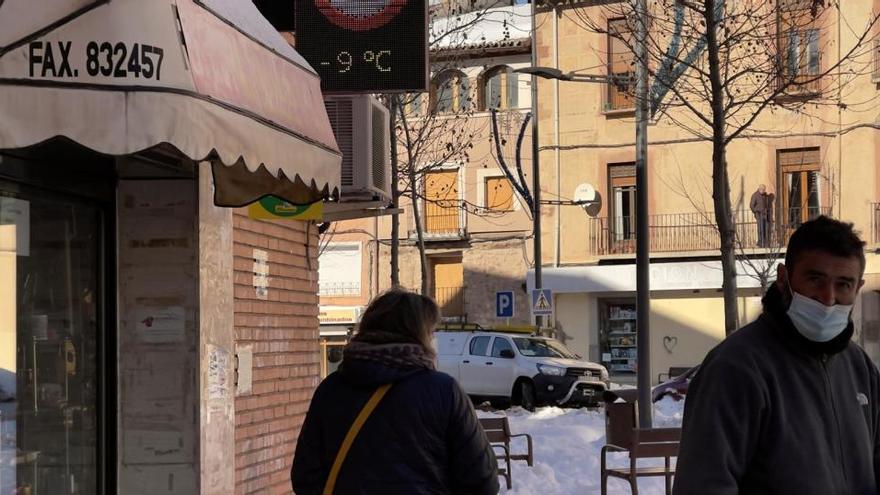 The cold wave that began on January 5 and was going to end this Thursday sand will extend at least until next Monday, with cold that will continue until Wednesday, as reported by the State Meteorological Agency (AEMET) that warns that minimum temperatures will continue to be around -20ºC in the same areas of the center and the east of the peninsula.

AEMET spokesperson, Rubén del Campo, explained to Europa Press that this could become the second longest cold wave of this century, after the one recorded in December 2001. “The snow coverage persists, the environment remains very stable, with clear skies and the winds are calm, which will cause very strong frosts, so we extend the cold wave warning at least until Monday, “he summarized.

In addition, although the frosts are less They won’t leave until Wednesday when an Atlantic storm hits, with humidity and more temperate wind. The spokesperson foresees that over the weekend and Monday the situation will be similar to that of these days since the anticyclone persists over the Peninsula, which will continue to stabilize the weather and will cause the phenomenon of thermal inversion that means that the cold stays in the lower areas, so that it can be colder in valley areas and on the two plateaus than in mountain areas.

Likewise, Del Campo emphasizes that This phenomenon favors a worsening of the air quality, since the polluting particles also remain stagnant in the lowest layer and this makes citizens stay within that air mass with more pollution, as if they were inside a bubble or a sponge. “The air quality forecast for Madrid and Valladolid is bad due to this circumstance“, precise.

In short, the frosts will continue to be very strong in the center, in Madrid, especially in the east, in Toledo, east and south of Castilla-La Mancha, south of Aragon and Iberian Zaragoza as well as in the east of Castilla y León, particularly in Soria and Segovia where the minimum temperatures will repeat the -10 at -15ºC and in the Guadalajara or Teruel area, at points in the Molina de Aragón or Bello area, one more day can be reached between -15 and -20ºC.

“Friday and Saturday will still have colder mornings than today, although the coldest day will not be reached, which was on January 12, “the spokesman pointed out, explaining that the situation is becoming more acute because a mass of cold air will enter from the north of the European continent, which is cold and dry and will contribute to lower temperatures.

“We are going to return to -20ºC in areas of Teruel and Guadalajara; to the range of -10 to -15ºC in the east of Madrid and they will have between -5 and -10ºC in the interior areas where they are not covered with snow. It seemed that the cold was leaving, but it persists and in some points it will be possible to exceed -20ºC from time to time “, explains Del Campo, who adds that in the Ebro valley they will get rid of intense frosts by the gale wind.

Although lAEMET could end the cold wave on Monday, even on Tuesday there will be frosts and on Wednesday an Atlantic front will arrive from the west, driven by westerly winds that are humid and temperate. “The weather will change radically,” predicted the AEMET spokesperson, who anticipates that it will rain mostly in the western half.

This situation will contribute to the thaw, but points out that where it will rain most is in the western half and on Thursday the rains will reach the eastern half, which is where there is more snow, so trust that this thaw is more gradual. With the rains, temperatures will rise so that between Tuesday and Wednesday the minimums will rise between 5 and 10 degrees Celsius in much of the center and west, so the frosts would disappear.

Specifically, it foresees that in Castilla y León the minimums will rise about ten degrees Celsius, so they will go from being between -5 and -10ºC on Tuesday to rise to 0 or 5ºC. On Thursday they will also continue to rise in the east of the Peninsula, between 5 and 8 degrees Celsius so that on that day there will probably be no frosts “at any point” and the maximum temperatures may even reach 20 or 22ºC on the Mediterranean façade and they will place between 10 and 15ºC on the two plateaus.

The spokesperson explained that the present cold episode that began on January 5, has already lasted 9 days and ensures that “in the last ten years there has been no such cold episode.” In this regard, he recalled that last year there were no cold waves while in 2019 there were two cold waves.

According to the AEMET records, there has not been an 8-day cold snap since 2012 and will “probably” become the longest cold snap to date in this 21st century, after December 2009, which lasted for 17 days. “At the moment we have eight days and this will probably last at least 13 days,” he compares.

Ultimately, this would be “very likely the second most intense and lasting since 2001” and it remains to be confirmed whether it surpasses previous ones.

Finally, he added that in the whole of the Community of Madrid the early morning of January 12 was “the coldest since 1963, that is, in 58 years” and these days absolute records have been broken in Teruel, Calamocha, Toledo and Getafe.

Cuñaos in a pandemic – La Provincia