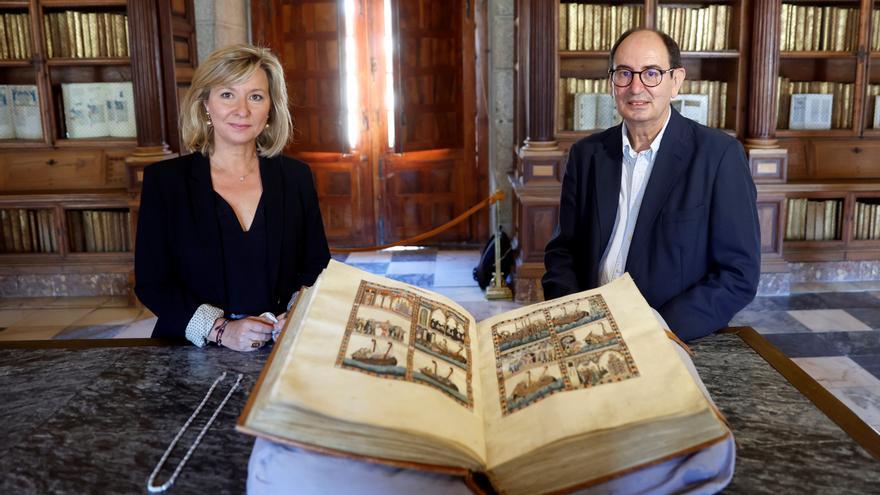 Madrid, Jun 27 (EFE) .- The two codices of the Cantigas de Santa María de Alfonso X that are kept by the National Heritage in the Monastery of San Lorenzo de El Escorial, one of the most important works that exist on the life of the 13th century in Europe , will be in view of all from Tuesday, June 29 after its digitization.

Alfonso X, King of Castile (1221-1284), called El Sabio, gathered throughout his life in the Cantigas de Santa María, in four codices, the most important musical repertoire in Europe on lyrical and medieval folklore, in addition to the most rich medieval Marian songbook, with 420 poems written in Galician-Portuguese, musical notations and illustrations.

Two of them, the so-called Codex Rico and that of the Musicians, are in the library of the Monastery of San Lorenzo de El Escorial (Madrid) and depend on the National Heritage, while the other two are kept in the National Library of Spain and in Florence.

On the 29th, the digitized edition of the Codices Rico and the Musicians of the Cantigas, the songbook of Alfonso X, the king of Toledo, who decided to collect a tribute, will be made available “to researchers and curious people, to those who love history. Mariano throughout his life and that he was enriching with successive cantigas, “the president of National Heritage, Llanos Castellanos, told EFE.

The codices arrived at the Monastery of El Escorial in 1576, explains the director of the Royal Library of San Lorenzo de El Escorial, José Luis del Valle, who relates that Alfonso X left said in his will that the Canticles to the Virgin Mary would be deposited where he was buried or, if not, they passed to the legacy of the Crown.

It was in the time of Sancho IV that the Codex Rico came out of the royal chapel of the Cathedral of Seville, together with the one that is in Florence today, both with very similar characteristics and which would be the first and second part of these Cantigas. In the last quarter of the fourteenth century, the Codex Rico was found in Segovia and later went to the Simancas Archive.

Meanwhile, the Codex of the Musicians remained in the cathedral of Seville for the liturgical songs until Felipe II decided to incorporate it, as well as the Rico, to his private collection in the library of San Lorenzo de El Escorial. Since then they have remained there.

The Cantigas “speak of miracles performed by the Virgin to someone who has invoked her intercession in a delicate or dangerous moment. The Virgin comes, intervenes, saves and ends up giving thanks to the Virgin, is the structure of all of them. And that text is put into images “, explains José Luis del Valle.

And as in the thirteenth century there were many people who could not read, “with the images they could follow the miracles that the text narrates,” he adds.

In the Codex Rico, every nine cantigas there is a tenth of praise to the Virgin: there are two columns of text with the music incorporated in a stanza and with vignettes with images.

In that of the Musicians there are more than 400 cantigas. And every nine, at the beginning of the tenth, there is always an image where one or two musicians appear with the musical instruments of the time, “says Del Valle.

“Very valuable images to know the musical instruments of that time, the same as the other text is of enormous value to know lots of events that could happen in the daily life of the XIII century. There are structures of buildings, clothes, armies, people plowing the field, on horseback, boats. One of the most important books that exist, not only of a religious nature but also of a civil and political nature, from the thirteenth century in all of Europe, “he says.

Despite having been in the monastery for centuries, the Cantigas books “have never been cloistered,” says the head of the library and, in fact, they have been seen and consulted a lot. But facsimiles were also made, such as the first important one published in Spain, precisely that of the Codex Rico in 1979, and another in 2011, which facilitated its study.

To carry out the digitization of the two codices, 1,500 photographs have been taken that will allow access to these historic copies online, a fact that has already aroused great interest from scholars both in Spain and in the US or the UK.

“They are copies from 1270 in the 21st century and our duty now is to enable them to continue to be available to the world in 300 years,” says the president of the National Heritage, who explains that their digitization will allow these codices to be available to everyone. in a great degree of detail.

“It is a commitment to openness, to culture, because it has to be open to everyone,” says Llanos Castellanos.