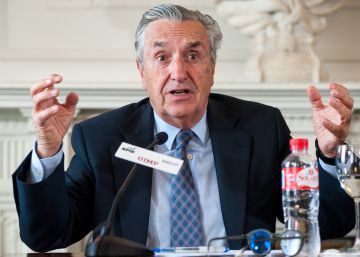 The president of the National Commission of Markets and Competition (CNMC), José María Martín Quemada, said Monday that he expects the collaborations between the body, the Executive and the energy producing and transport companies to "translate" in a reduction in the price of electricity and gas "as of January 2020". From this date, as he said, will come to a process of "normalization of relations" between companies, CNMC, Government and consumers.

"The CNMC is due to the general interest and that is the only thing we serve, our goal is the general welfare: consumers and businesses," he said during his speech at the opening of the course The fundamental role of networks in the energy transition of the Menéndez Pelayo International University (UIMP).

Martin Quemada has qualified, in declarations to the means, that "the circulars that are at the moment subject to public information and that establish reductions in the remuneration to the networks of gas and electricity will be analyzed after the end of the process, during August and September, and it will be when the advantages derived from the system can be specified, which will undoubtedly be many: stability, risk reduction and, above all, benefit for consumers ".

Martín Quemada has assured that Competition "is assuming decarbonisation and security of supply objectives", as well as the National Integrated Energy and Climate Plan (PNIEC) proposed by the Government. However, he has argued that the actions in this area "have to be coordinated" so that "it is compatible" with the functions of the different actors: the CNMC as regulator, the Government, companies and citizens.

In his opinion, this process "can produce tensions between the regulator and the Government", but he has maintained that these tensions "will be healthy" due to the purpose of "achieving the objectives with the effort of all".

The president of the CNMC has ensured that these objectives "are what is carried in Europe" and what the European countries "are doing", while he recalled the existence of a process imposed from Brussels against Spain for a delay in matters of energy and climate. Thus, he pointed out that the energy transition is "forced by circumstances" and that "Spain has to make that transition" because "commitment to climate change is a commitment to citizens". "It is doing what we have to do and what we have to try is to do it in the best possible way," he said.

Martín Quemada regretted the lack of time since "the competitions were given" to the CNMC as an independent actor of the Government last January, to the publication of all the circulars that are expected to take place at the end of the summer. Similarly, criticized that, before this year, the regulatory framework on competition "was so outdated" that did not incorporate the changes in the electricity sector of the last 20 years.

Therefore, this year the CNMC has proposed to revise the framework, as well as "guarantee effective competition" of the markets with "clear and efficient" rules, "guarantee the profitability of the companies", because "if there are no companies there is no GDP or work ", and" have completed the package regulatory proposals at the end of the summer. "