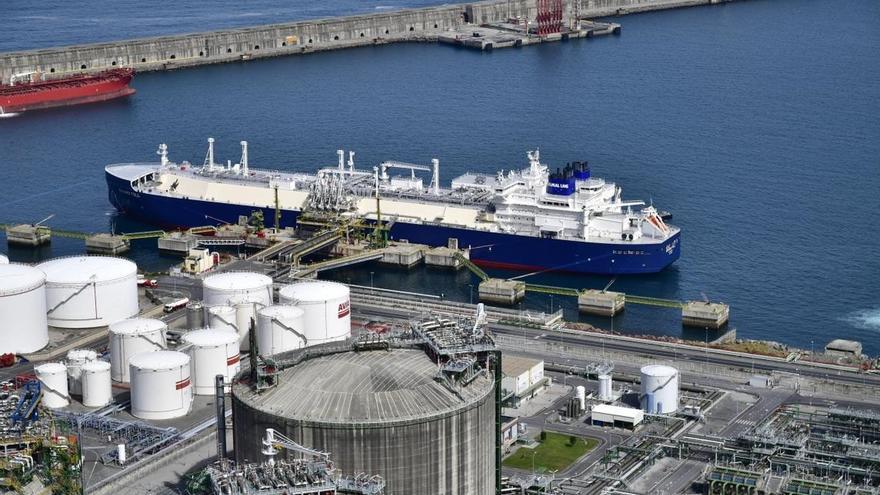 Spain plans to double this month the arrivals of natural gas through ships loaded with liquefied natural gas (LNG), once the closure of one of the two gas pipelines that bring this raw material from Algeria has been made effective, the one that passed through Morocco.

Based on the latest information on the operation plan for next November that Enagás, the technical manager of the system, has updated this Tuesday, throughout this month there are 27 scheduled unloadings from ships with an approximate energy of 26.3 terawatts hour (TWh). This figure is equivalent to about 2,300 million cubic meters of gas (2.3 bcm), an amount that represents just over 7% of the annual consumption in Spain in 2020 (32 bcm).

Whether these forecasts are met will depend on the trading companies making use of the previously reserved capacity, but those 26.3 TWh practically double the gas inflows per ship from a year ago. According to Enagás data, in November 2020 a total of 16 ships unloaded in Spain, with an approximate energy of 14.87 TWh, approximately 1.3 bcm.

The pipeline now out of service supplied just over 20% of the gas that Spain consumes and its closure has occurred in the midst of the energy crisis, in a context of enormous international competition for those ships, and in a scenario of saturation of maritime transport world by the economic reactivation after the pandemic. This congestion, however, does not affect the transit of LNG tankers, say industry sources.

Another thing is the price at which that gas reaches, which among other uses feeds the combined power plants that determine the prices of the electricity wholesale market, which after the records of October has been, on average, above 200 last month euros per megawatt hour (MWh) for the first time in history.

To replace the closure of the Algerian pipe, Spain is going to entrust its powerful network of regasification plants, the largest in Europe. With six plants in operation (Barcelona, ​​Bilbao, Cartagena, Huelva, Mugardos and Sagunto), Spain is the sixth country in the world with the most facilities of this type in 2020, after Japan (36), the United States (10), China ( 22) and South Korea (7).

These plants allowed Spain to be the European leader in LNG imports by 2020 and number 13 worldwide, according to GIIGNL data. In them, the gas that arrives in a liquid state via ship is processed. But this alternative is more expensive than the gas pipeline.

After Algeria’s decision to turn off the tap in retaliation against Morocco, this Tuesday Vice President Teresa Ribera again launched a message of tranquility by insisting that Spain has gas reserves equivalent to between 40 and 43 days of consumption. This, Ribera said on TVE, would cover 20 episodes like the storm Filomena last January, the “most tense we have experienced in recent years.” “We have a very, very, very important reserve,” insisted Ribera.

Last week, after meeting in Algiers with the country’s authorities, Ribera assured that he had obtained “full guarantee“of the gas supply of the North African country. And last Sunday, Enagás stressed that” there are no objective indications of a situation of lack of gas supply in the coming months.

“Thanks to the anticipation measures adopted in coordination with the Ministry for the Ecological Transition and the Demographic Challenge, the Spanish Gas System has contracted natural gas capacity levels higher than that of previous winters on the same date, and is currently in a better situation than that of other neighboring countries “, according to Enagás.

The system manager explained that for November, “100% of the capacity offered in the regasification plants in Spain has been contracted, the maximum possible, leaving only 5% according to the legislation for daily supply and contracting”. Thus, the Spanish gas system started November with 18.8 TWh in its plants, 65% more than in October 2020. “As for underground storage, they are already at 82% of their capacity, with 28.3 TWh of stored natural gas “.

The capacity contracted in the LNG tanks for November is thus the aforementioned 95%, compared to 57% in November 2020. For December, and in the absence of an auction to award new capacity, 77.41 has already been contracted. %, compared to 58.71% a year ago. Regarding the so-called slots for ship unloading at the Spanish plants for the winter season, which runs from November to March, there are already 136 awarded, while “last winter 86 ships were unloaded at the Spanish plants.”

Algeria, Spain’s main gas supplier, with 47.3% of gas imports up to August, has promised to comply with the signed contracts and meet any additional needs that Spain may have after visits made in recent weeks to Algiers by the Ministers of Foreign Affairs, José Manuel Albares, and Ecological Transition, Teresa Ribera.

After breaking diplomatic relations with Morocco in August, Algeria has carried out its threat to punish its neighbor by not renewing the contract that ended on October 31 for the Maghreb-Europe gas pipeline (GME). Once the closure of the pipeline has been made effective, the messages launched last week by Russia to guarantee the filling of European gas warehouses for the winter have made the price of gas that marks the reference of the Iberian market Mibgas has it has fallen in recent days to 63 euros / MWh. Well below the 145 euros that it reached a month ago, although more than triple that at the beginning of the year.

The GME gas pipeline was inaugurated on November 1, 1996. It connects Algeria with Spain from the HassiR’Mel field through the Strait of Gibraltar. Its route includes 539 kilometers that pass through Moroccan territory. This country has received every year between 50 and 200 million euros in tolls and about 800 million cubic meters per year of Algerian gas.

The GME has a capacity of 13.5 bcm. The other Algerian gas pipeline, Medgaz, has the capacity to transport 8 bcm, which in January it plans to expand to 10 bcm. In this infrastructure, which until August has covered 21.3% of gas consumption in Spain, Naturgy participates with 49%, in which the Algerian state-owned Sonatrach is a shareholder with 4.1%.