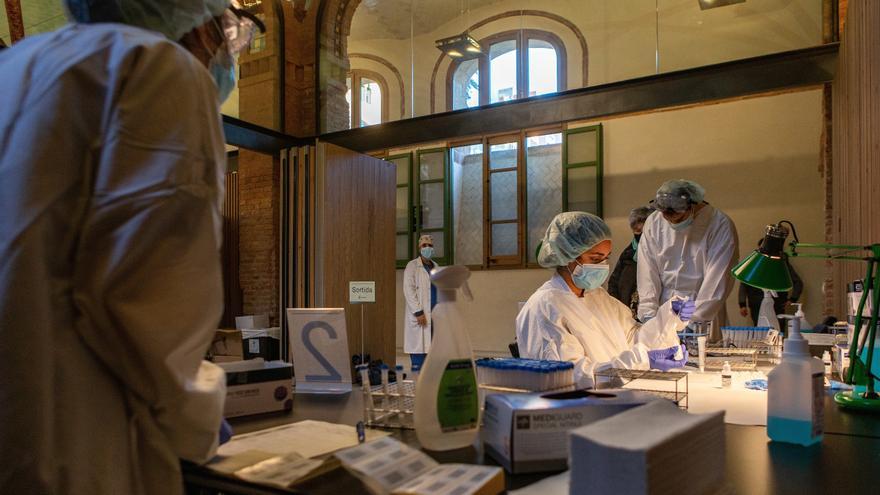 Barcelona, ​​Dec 23 (EFE) .- The sudden closure of Ripollès and La Cerdanya two days after Christmas, with hotel and restaurant reservations already made, has caused outrage in both regions due to the impact it will have on the economy, in a moment in which the virus loosens in Catalonia as a whole.

The speed of spread of the coronavirus (Rt) has fallen again this Wednesday for the third day in a row and has stood at 1.33, seven hundredths less than on Tuesday, although the number of infections increases and in the last 24 hours they have been diagnosed 2,639 new positives and reported another 56 deaths from COVID.

Although the situation is somewhat better in the whole of Catalonia on the eve of Christmas, the data from Ripollés and Cerdanya are alarming: they accumulate 1,962 cases of covid in the last 14 days, the first, and 1,407 the second, with rates of regrowth (EPG) of 3,521 in the case of La Cerdanya and 1,907 of Ripollès.

This situation has led the Government to decree from this Monday, until January 6, a perimeter confinement of both regions, which can only be accessed for work or justified reasons.

A device made up of some 200 mossos d'esquadra and local police has controlled compliance with the perimeter confinement from the first hour, which has generated retentions at the entrances and confusion among drivers.

Unlike the rest of Catalonia, the second residence or a hotel reservation is not considered as an exception in these two regions, which live largely from mountain and snow tourism.

The mayors of Llívia (Cerdanya), Elías Nova, has expressed his discomfort because he was not notified of the confinement, while that of Ripoll (Ripollès), Jordi Munell, has criticized the closure to two days of Christmas and with the hotels full.

Munell has reproached that "there are more affected in a block of Barcelona or L'Hospitalet than in all the Ripollès".

"The data are relative. We have a very high R, and over 100,000 inhabitants, the rate is also very high, but in absolute cases it is 170," the mayor said in statements to Rac1.

For his part, the managing director of the Campdevànol hospital (Ripollès), Joan Grané, has opined that the perimeter closure "may have been late", because this health center suffered greater health pressure a few days ago than now.

At the Cerdanya cross-border Hospital, in Puigcerdà (Girona), the number of patients admitted daily due to covid has gone from two to 14 in the last ten days, according to the deputy director of the center, Xavier Conill, who has nevertheless specified they are not close to collapse.

The perimeter closure of the two regions is the last restriction of the Government before Christmas, which does not affect the rest of Catalonia, where the regional confinement is established but it is allowed to break it to go to second homes, a hotel or visit a relative.

In parallel, the Health Department finalizes the preparations for the vaccination, which should begin on Sunday 27, and has already sent the document to the geriatric residences of Catalonia that the inmates and workers will have to fill out to give their consent and thus receive the first dose of the Pfizer vaccine.

The vaccines, which will begin to be administered in residences and then will reach the toilets, are voluntary, but the Secretary of Public Health of the Generalitat, Josep Maria Argimon, does not see a need for a registry of people who do not want to be vaccinated against the covid.

Likewise, the Vall d'Hebron Hospital has begun recruiting volunteers to participate in a phase III clinical trial of another vaccine, that of the pharmaceutical company Janssen (Johnson & Johnson).