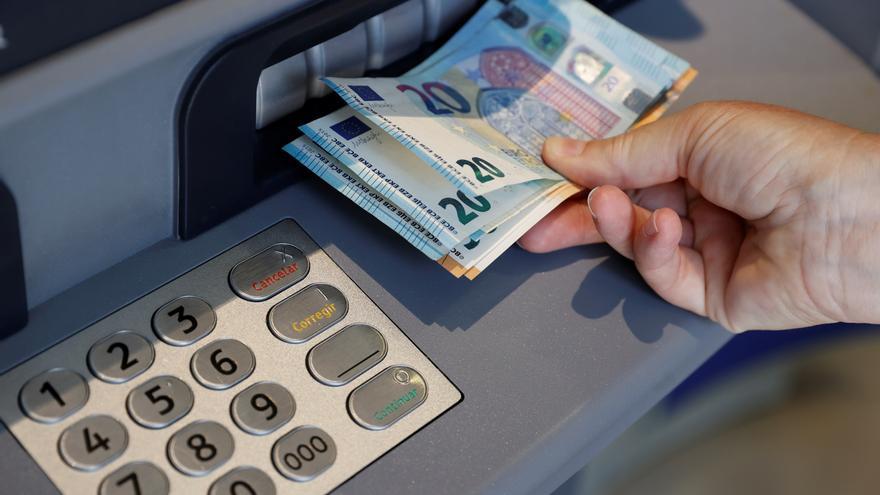 Half of the bank branches in Spain have disappeared since the 2008 crisis and with it thousands of ATMs. The closure of dozens of savings banks has since increased the outflow of entities from rural and less densely populated areas. In this sense, the Bank of Spain has detected that almost 1.2 million Spaniards did not have a traditional point of access to cash in their municipality at the end of 2020, although it indicates that, in aggregate terms, there is a high percentage of the population that has a cash point at a “relatively low” distance, specifically, five kilometers.

This is reflected in his article ‘Cash infrastructure and vulnerability in access to cash in Spain’, published this Wednesday and prepared by Diana Posada, economist of the supervisory body. In this sense, Castilla y León is the autonomous community with the least extensive coverage, with Zamora (27.8% of the population without access out of the total), Ávila (21%), Segovia (19.9%) and Palencia ( 18.2%) as the provinces that present lower population ratios with a traditional point of access to cash within a radius of five kilometers.

The supervisor explains this situation by the lower population density, as well as by other factors, among them, the orography of the territory, which has historically meant that the coverage of the network of offices and ATMs in these areas of the country has been less and alternative solutions have been used, such as financial agents or mobile offices. To this, the Bank of Spain adds the bank consolidation process in recent years, which “has intensified a situation whose starting point was already less favorable.”

The agency points out that there are alternatives to bank offices such as the use that some financial entities are making of the network of Post Offices as an alternative means of disposing of cash. In his article, he highlights that, in countries such as Ireland, the United Kingdom or Australia, the use of post offices for this purpose is widespread in rural areas, while in Spain “it is still rare.” If its use for this purpose becomes general, the Bank of Spain considers that post offices could be complementary access points to branches and ATMs.

The article also analyzes the distribution of the post office network, located mainly in urban centers with more than 10,000 inhabitants. If the Post Office establishments, bank offices and ATMs are taken into account, 99% of Spaniards would have a potential point of access to cash within a radius of five kilometers.

The Bank of Spain also includes the implementation of other alternative means, such as ‘cashback’ and ‘cash-in-shop’ (withdrawal or deposit of cash in a commercial establishment) whose implementation in Spain is recent, but which is gaining more relevance in urban centers, or the use of the network of tobacconists and the state lottery and betting establishments.

One of the conclusions of the article is that the supervisor plans to reduce the number of branches and ATMs, motivated by digitization and the search for greater efficiency by banks. For this reason, it considers that the promotion of this type of alternative solutions “can be an important complement that allows guaranteeing access to cash to the entire population”, although it emphasizes that, due to their current limitations, they cannot completely replace the services that provide traditional channels of access to cash.

On the other hand, the supervisor has observed that vulnerability in traditional access to cash in Spain is “relatively low” in much of the territory, although it has detected that there are approximately 1.3 million people in a “vulnerable” situation. This is a figure obtained through the Vulnerability Index in Access to Cash (IVAE), which takes into account both supply and demand indicators for cash. Specifically, four factors have been taken into account: the number of traditional cash access points per 1,000 inhabitants for each municipality; the distance to them; the average disposable income per person; and the proportion of people over 60 years of age in each locality.

The Bank of Spain indicates that, depending on the degree of vulnerability, most of the Spanish population lives in localities with a “low or very low level of vulnerability”. However, approximately 3% of citizens would find themselves in a situation of medium or high vulnerability in terms of access to cash. In addition, about 340,000 people would reside in municipalities with a high vulnerability, which represents 0.7% of the Spanish population. These are, in general, small towns, with an average population of 400 inhabitants, with people over 60 years of age who exceed 40% of the total, with an average distance of 9.4 kilometers to a cash access point, and a disposable income below the national average.

The provinces of León, Salamanca and Zamora would concentrate most of the population in municipalities considered to be of very high vulnerability in access to cash.

Regarding infrastructure, the Bank of Spain states that at the end of 2020, the number of bank branches and ATMs of all kinds in Spain stood at 22,299 and 49,481, respectively, which represents 1.5 points of access to cash per every 1,000 inhabitants of the Spanish territory. The banking infrastructure is mainly made up of branches and ATMs located in the branches; and, to a lesser extent, displaced ATMs, which represent 8.5% of the total. Its coverage extends to both urban and rural areas, with 78% of branches and ATMs located in towns with more than 10,000 inhabitants.

The supervisor’s analysis shows that ATMs belonging to independent operators are generally concentrated in large urban centers on the Mediterranean side, in the south and the center of the peninsula. These ATMs are usually installed in high traffic areas, such as train stations, airports or shopping centers, while in rural areas they are less frequent, according to the Bank of Spain. In total, there are about 6,000 independent operator ATMs in Spain, 12.1% of the total, of which approximately 1% are installed in municipalities with fewer than 10,000 inhabitants.

At the provincial level, Cuenca has the highest number of traditional cash access points per 1,000 inhabitants, with 2.4 points, although they are concentrated in a relatively low number of municipalities within the province. On the opposite side is Cádiz, with 1.1 access points per 1,000 inhabitants, although geographically distributed in a relatively more homogeneous way.

The supervisor points out that he does not observe large variations between provinces in the number of access points to cash per inhabitant, although they do occur by level of concentration. Specifically, it maintains that in the northern half of the peninsula – except for the Cantabrian coast and Galicia – there is a more unequal geographical distribution of access points, compared to the southern half, where the distribution is more equal. The highest degree of concentration is located mainly in the provinces of the autonomous community of Castilla y León.