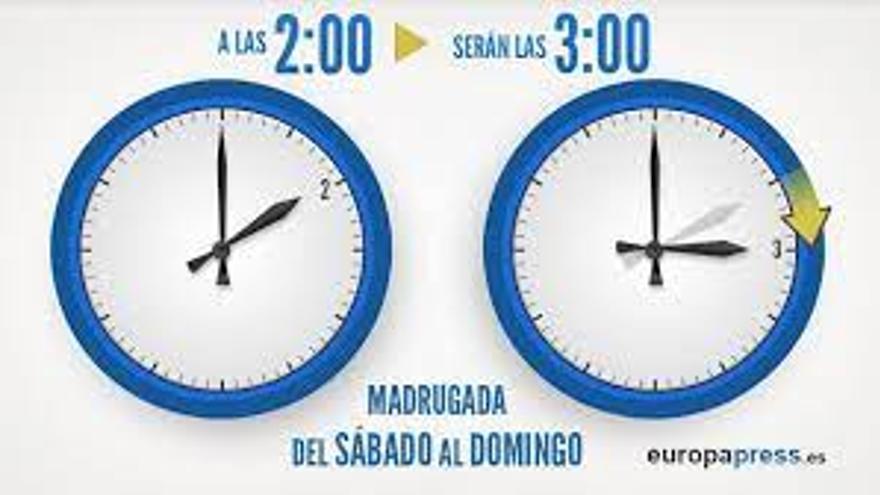 The early morning from today Saturday to Sunday morning lhe citizens of the European Union (EU) will advance their clocks one hour, a change regulated in community legislation whose abolition has been debated for three years. Canaries will sleep one hour less, like the rest of the citizens of the continent, since the clocks will advance one hour, so that at 01.00 it will be 02.00.

This time change occurs twice a year, usually on the last Sunday of March and the last of October, and began to become generalized from 1974, when the first oil crisis occurred and some countries decided to advance their clocks to take advantage of better sunlight and thus save electricity.

While two Member States (Ireland and Portugal) will be placed one hour apart from GMT this Sunday, in the cases of Spain, Austria, Belgium, the Czech Republic, Denmark, France, Germany, Hungary, Italy, Luxembourg, Malta , Poland, Slovakia, Slovenia, Sweden, Croatia and the Netherlands, will set their clocks to GMT + 2.

For their part, Bulgaria, Cyprus, Estonia, Finland, Greece, Latvia, Lithuania and Romania will advance the time to GMT + 3.

In September 2018, the European Commission proposed to end the time change in 2019 after a public survey that collected a record number of responses (4.6 million) and which revealed that the majority (84%) of European citizens want to end with that practice.

Even so, the abolition of the time change must be debated and agreed by the two EU co-legislators, the European Parliament and the Council (the Member States), so that it can enter into force.

In its legislative proposal, the Commission offered the Member States the freedom to decide whether they will be permanently governed by summer time or winter time, but urged that they agree on it “in a coordinated manner between neighboring countries”.

For its part, the Transport Committee of the European Parliament (EP) yesterday urged the Member States to put an end to the time change.

This petition dates back to 2018, when Parliament asked the Commission to assess the directive on the provisions for summer time and, if necessary, to present a proposal for a revision of the directive.

Following the evaluation, which received 4.6 million responses from European citizens, of which 84% were in favor of ending the clock changes, the Commission presented the proposal, which was reviewed by the EP in 2019 .

The European Parliament voted in favor of eliminating this practice of adjusting the clocks in a spring and autumn time from 2021, but the Council of the EU has not yet taken a position on the matter.

Social Democratic MEP Johan Danielsson said in a statement that “it is important to address citizen demands to stop changing the time” to show them that the community bloc takes note of their concerns.

According to the legislator, 20% of the population suffers from physical or mental problems related to the time change and, for the most part, these are vulnerable groups in society, such as children, the elderly or the chronically ill.

“I hope that the EU countries stop procrastinating and go to the negotiating table to agree on the end of the time change without further delay,” said the Swedish politician.

The president of the Transport Commission, Karima Delli (Los Verdes) highlighted that the Twenty-seven “must coordinate with each other to choose the best time for their region” and accused that, according to numerous studies, the change of time “has an effect negative for human health ”.