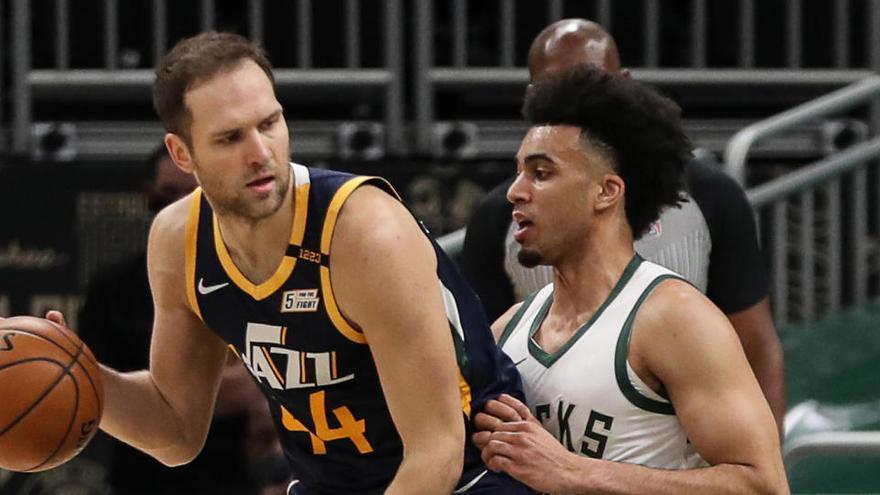 The Utah Jazz they beat their record of triples, when adding 25, in the victory as visitors over the Milwaukee Bucks (118-131), in an NBA day, in which the Los Angeles Clippers suffered a collapse again in the last quarter of their game against the reborn Warriors Golden State, with point guard Stephen Curry, as a great figure.

Guard Donovan Mitchell scored 32 points for the Jazz, who scored 25 of 53 3-pointers, snapped a two-game losing streak and also became the first team in NBA history to have five players with at least four triples in the same party.

For the Bucks, the Greek power forward Giannis Antetokounmpo scored 35 goals as leading scorer, but this time they could not give the victory to the Milwaukee team, which lost for the first time in their field (4-1).

The Houston Rockets also had triples as their best attacking weapon and with 22 – the best mark of the season – they rolled 132-90 to the decimated Magic of Orlado.

The young center Christian Wood with a double-double of 22 points and 15 rebounds -He tied the best individual mark-, he finished as leader of the Rockets (3-4), who broke a streak of two consecutive losses, and had six players with double-digit numbers.

Curry contributed a double-double of 38 points and 11 assists that helped the Warriors complete a comeback against the Angeles Clippers, whom they beat by 115-105, in a duel of teams from the Pacific Division.

The Warriors trailed by 21 points at the end of the third quarter, but Curry scored 19 in that period and placed Golden State to six at enter the last 12 minutes of action.

The fourth period allowed the Warriors (5-4) scoring display to be even more spectacular and They finished with a 34-18 partial.

The victory of the Warriors, who already have a winning record so far this new season, allowed them to break the streak of four consecutive losses they had had against the Clippers, who two nights before had won in the same scene of the Chase Center, San Francisco.

Since the start of last season, and including the playoffs, the Clippers have lost eight games, the most in the NBA, when they lead by at least 15 points, something star forward Kawhi Leonard He said he had to “finish” if they want to be a champion team.

Power forward Jayson Tatum scored 32 points as the leader of the Boston Celtics, who defeated the Washington Wizards 116-107 for the fourth consecutive victory. best current streak in NBA that left them 7-3, the third best in the Eastern Conference.

While guard Bradley Beal, who contributed 41 points, and eight rebounds was once again the leader of the Wizards, after in the previous game, against the Philadelphia Sixers, he scored 60 points, his best mark as a professional, and tied that of the franchise.

Forward Gordon Hayward scored 26 points as the Charlotte Hornets’ leading scorer, which defeated the New Orleans Pelicans 110-118 on the road, in the game that had the Lonzo brothers and LaMelo Ball as protagonists, being the first in which they faced each other as professionals.

Both were selected among the first three in the university draw for the last four years.

LaMelo, chosen third in the 2020 university draw, as a reserve, had the best night, after staying at the gates of a triple-double after achieving 12 points, 10 rebounds, nine assists and a comeback with the Hornets.

While his older brother, Lonzo, started with the Pelicans, but he did not have the same inspiration and lost the duel by remaining with just five goals, three assists, two rebounds, a ball recovery and a mate.

Canadian shooting guard Shai Gilgeous-Alexander scored 25 goals as the best scorer for the Oklahoma City Thunder, who beat the New York Knicks 89-101 on the road, breaking a three-game winning streak.

The decimated Angeles Lakers (7-3) suffered before beating the Chicago Bulls 117-115, but once again star forward LeBron James made the difference by contributing 28 points, seven rebounds and six assists and his team remains the leader in the Western Conference.

Karla Ticona arrives at Teldeportivo to reinforce the pivot

Herrera: “We got a difficult point and we are already thinking about the Canarian derby”