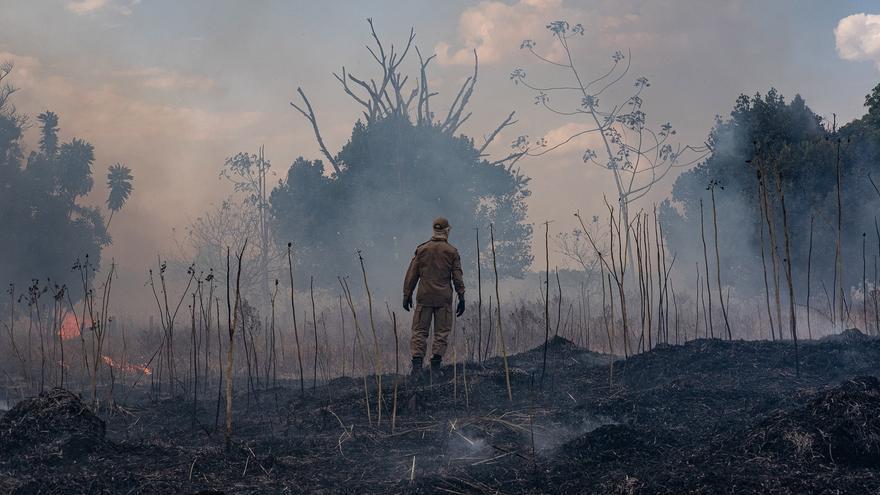 75% of the Amazon forest shows an increase in its deterioration since the year 2000 "compatible with the approach to a critical transition" in which "deforestation and climate change may have pushed the Amazon towards a threshold of extinction of the forest ”, according to research from the University of Exeter published in Nature.

The suspicion that the tropical forest of South America is approaching a point of no return is not new, but the work of these British researchers has been based on real satellite observations: "Three quarters of the forest have lost resilience", that is to say , the ability to adapt to adverse situations conclude. This ecosystem suffers from "longer dry seasons and greater frequency of droughts" in addition to direct human action.

This type of deterioration is the way to become savannah. That is, moving from a tropical forest ecosystem to another with smaller trees, more bushes and a much lower density. Its tree canopy, in contrast to that of a jungle, has little coverage.

Although the most common image of savannah is related to Africa, this biotope also occurs, without going any further, in Brazil. The Cerrado area, south of the tropical forest, is the largest savannah in the world. And it is accelerating its fire-based deforestation to become industrial soybean farms.

"We provide evidence of the risk of extinction of the forest that would have profound implications for biodiversity, carbon storage and climate change on a global scale," concludes this team.

What the work refers to is that the Amazon, in its forest state, is a kind of CO2 sponge. It absorbs greenhouse gas emissions, but if the trees disappear, that flow can be reversed. In fact, in addition to reducing this absorption in recent decades, "during the two great droughts of 2005 and 2010, the Amazon was a net emitter of carbon." This means that it released more CO2 than it was able to retain "due to the tree mortality" it suffered.

Although the researchers warn that an exact moment at which this transition would be irreversible cannot be foreseen, they do affirm that the calculation models "show that large parts of the Amazon may be compromised by forest extinction before showing great changes in its condition". By the time it was detected, it would be too late.

Deforestation, large forest fires, climate change and the use of land for human activities they are interconnected. The climate crisis favors the conditions for the spread of fires that, in turn, release a large amount of CO2 that exacerbates, once again, the change in the global climate. The use of large open spaces in the Amazonian tropical forest for industrial agriculture and ranching adds more forest loss.

“In summary”, says this research “we have revealed empirical evidence that the Amazon forest has lost resilience since 2000 and, in addition, we provide evidence that drier conditions -which have caused three severe droughts- combined with a pronounced increase of human action on the ground have probably played a crucial role in that loss.” Reducing deforestation caused by humans will not only protect the areas directly affected but will "benefit many other parts of the Amazon."