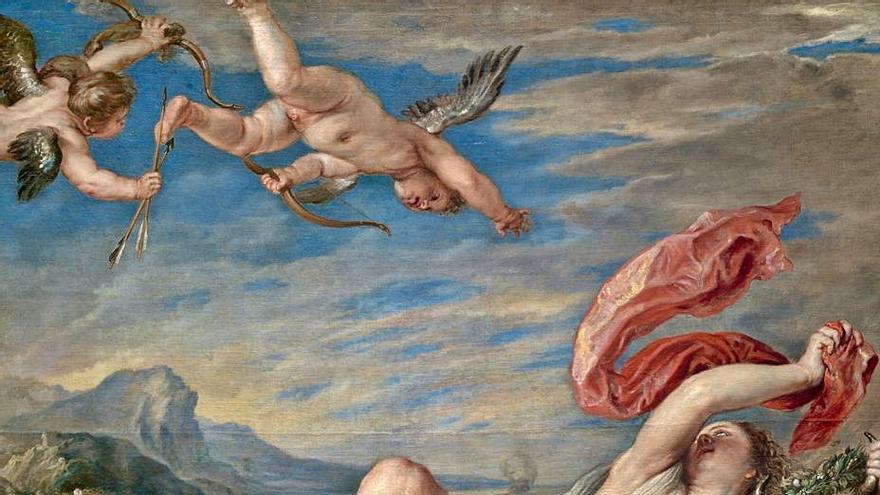 Under the title “Mythological Passions”, on March 2 the Prado Museum opens its new exhibition dedicated to the influence of Titian on the great masters of the seventeenth century. The common thread of the exhibition are the canvases of the Poems that the Venetian painter sent to Felipe II between 1553 and 1562. They are about six works that have Love as the main character: Danae; Venus and Adonis; Perseus and Andromeda; Diana and Actaeon; Diana and Calixto; and the Rape of Europe. Titian uses Ovid’s narratives in the Metamorphoses to explain how Love achieves its goal and the consequences that, in some cases, the deceptions to which it resorts.

The fascination that there was for these compositions from the first moment is demonstrated by their placement in private rooms of the monarchs, and by the copies that some courtiers close to Philip II requested from their painters. Felipe IV was even going to give them to Carlos I of England in 1623, when he arrived in Madrid incognito with the Duke of Buckingham with the intention of closing the link with the king’s sister, Maria of Austria. Fortunately, this marriage did not come to fruition, and the paintings remained in the royal collections, where years later, in 1628, Peter Paul Rubens was able to copy them. Flamenco is going to have a special permission from the king to make these copies, a unique opportunity for a young Velázquez, who had come to court years before, and see how the flamenco master prepared and worked his canvases. Fortunately for the Spanish heritage, although Rubens took these copies with him, the Rapture of Europe could have been acquired by Felipe IV after the death of the painter. Velázquez, in fact, used that copy and not Tiziano’s, which he also had in the Alcázar, as the background for the story of Aracne that he tells us with a masterful visual game in Las Hilanderas.

The exhibition that now reaches the rooms of the Madrid museum, scheduled for last year, was organized between the venues that currently distribute Titian’s Poems: National Gallery in London, National Gallery of Scotland in Edinburgh, the Isabella Steward Gardner in Boston , and the Prado Museum. In London, the exhibition focused on Titian’s ensemble, as it was the first time that the paintings were brought together after their dispersal from the 18th century on. On the other hand, Madrid has had the ability to include, on the one hand, all the influence that these works had on later artists of the stature of Rubens and Velázquez and, on the other, show how Ovidio was a source of inspiration for other artists such as Veronés, Ribera, Poussin or Van Dyck.

In moments like the ones we are experiencing worldwide, where museums have to reinvent themselves to give way to a program that attracts the public, still wary in some cases to get into closed spaces, the call of the great names in the History of the Art never fails. In this, the Prado Museum has a great fortune, because in its “closet fund” it has the most representative figures of the 16th and 17th centuries in Europe, but also many jewels eager to be rescued from this exclusion to the warehouses to the one that was condemned for not fitting into the “Blockbuster exhibitions” to which all museums in the world were accustomed, where the number of visitors was above the stated discourse.

To instruct by delighting was one of the maxims of Horacio that don Juan Manuel, within our letters, knew how to masterfully expose in his Count of Lucanor, and that Titian captures in his Poems for Felipe II. The great museums, like the cinema, are fortunate to be able to do this with all the resources they have in their funds. Sometimes a pandemic is an opportunity. Resorting to classical mythology to teach universal truths is always going to have a pull. Reaching the new generations beyond time is a matter of ingenuity, and if not that they ask Pascu and Rodri and their new Poetry of the XXI century.