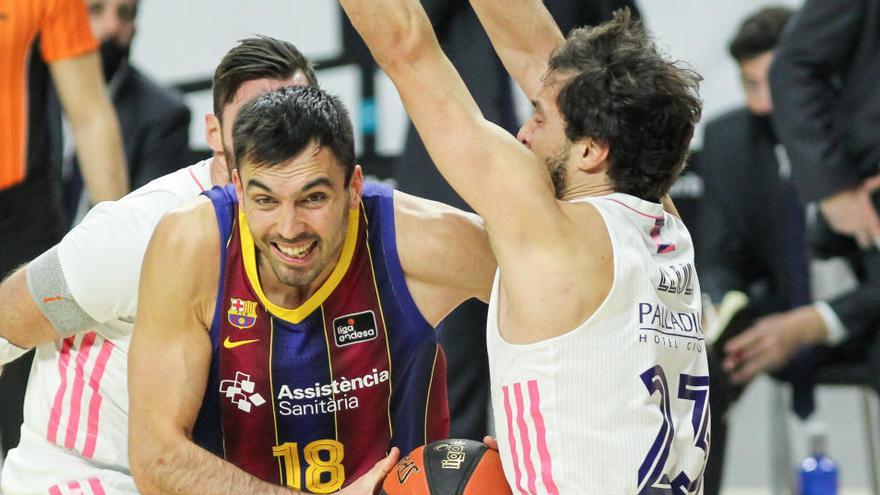 Barça won the Christmas ‘Classic’ of the Endesa League against Real Madrid (82-87), second in a row after the Euroleague, with a magnificent Nikola Mirotic, author of 26 points and the cap that sentenced the match, without longing for Thomas Heurtel, the focus of the previous controversy for wanting to go to the whites.

The Classic of the ‘Heurtel Case’ … was from Mirotic. The Spanish-Montenegrin power forward, with 26 points, 10 rebounds and a key final stopper on the Argentine base of Real Madrid Nico Laprovittola sentenced a duel marked by the situation of the French base of Barça, separated by the club in the return of the group trip of Istanbul (Turkey) upon discovering that he was negotiating with his eternal rival.

Despite this situation – “It is very difficult for everyone, we have to protect the club“, said before the game the Barça coach, the Lithuanian Sarunas Jasikevicius- Barça knew how to break the unbeaten leader of the Endesa League until today, dominating the rebound (38 catches by 31 of the whites) and limiting his triplist capacity to 10 hits from 27.

With Mirotic, a redoubled defense in the final part of the duel and a great finish from the American Kyle Kuric (14 points, 9 of them in the last quarter), the azulgrana team defeated a white team that was not served by Sergio Llull’s attacks (14 points, including 3 triples from 4 attempts) to react, in a high-level duel that met expectations of quality and emotion.

It was the great Christmas game of the Endesa League, and the two teams came out ready to give away: a carousel of five triples in two and a half minutes against defenses also obsequious (10-10). The marks were tightened later, especially by the whites, although Usman Garuba sweated ink to try to contain Mirotic, without much success because the Spanish-Montenegrin scored 14 goals only in the first act, including one after the rebound that closed it: 22-23 .

Jasikevicius bet his chips on Rolands Smits taking advantage of his height over Gabi Deck but not only the Latvian could not, but the Argentine returned it in counterattacks to equalize (26-26). Llull followed him chaining triple and basket, but before him a fireproof Pierre Oriola arose that started the partial 0-6 Barça (31-36, min. 15), matched almost instantly by the whites.

In constant equality, he uncapped the jar of Cory Higgins scents with high quality penetrations, to the point that he passed over Llull’s triplet trance -two successes in a row from 6.75 meters from Mahón’s- to chain another two trays that were again the tables at half-time (46-46).

Madrid returned looking for the Jaycee Carroll-Edy Tavares connection, but before it took effect, Barça had already made a 0-5 with a 2 + 1 from Mirotic. The Catalans were always one step ahead, reacting to Carroll’s triple with one from Adam Hanga (57-60, min. 27), but the whites took air with penetrations from Carroll and Laprovittola for the 65-64 that closed the third.

Everything was to be decided and in these duels sometimes it is the one who makes the fewest mistakes who takes it: a mate that came from within Tavares, and several triples missed by Llull, Carroll and Rudy Fernández allowed Barça to load their bag with seven points, then ten when Kuric hit a triple (72-82) with 4:22 left.

It seemed the final distance, but Barça’s wrist shook in his last attacks and Deck put the whites to four with a minute to go. Higgins hesitated, Madrid counterattacked, but when Laprovittola holed the basket, Mirotic appeared, with a stopper from behind that stopped the Argentine and sentenced the duel. Barça stopped Real Madrid’s inviting streak and took the ‘Clásico’ of the ‘Heurtel case’, turned into the Mirotic Classic.

Incidents: match of the sixteenth day of the Endesa League, played at the WiZink Center (Palacio de los sports of the Community of Madrid) without spectators due to the coronavirus pandemic.