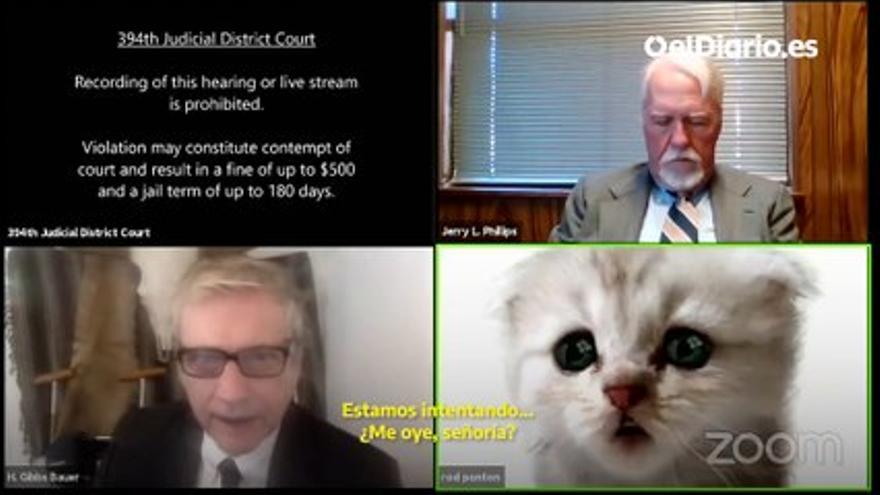 It was an online court hearing like many others during the pandemic, except for the fact that a lawyer had accidentally left a cat filter on in the app. The magistrate goes to him, kindly, to say that he does not see his face. And then the clarification: "I'm not a cat."

The moment has spread like wildfire on social media, as one more reflection of the digital setbacks caused by the coronavirus as many workers around the world adapt to working from home.

The protagonist is called Rod Ponton, a lawyer from Presidio County, Texas. But his face does not appear on the screen, but that of a small cat with wide eyes. Ponton had a Zoom filter activated during the video conference that he didn't know how to remove.

It was Judge Roy Ferguson who notified the lawyer. "I think you have a filter enabled in the video settings. Maybe you want to ...". Ponton responds in a hurry as the cat's eyes go to the corner of the screen: "Ah ... We are trying ... Can you hear me, Judge?" "I can hear you, I think it's a filter ...", replied the magistrate.

"It is," says the cat version of Ponton. "And I don't know how to remove it. I have my assistant here, he's trying, but I'm ready to go through with it. [la vista]... ". It is at that moment when he makes the comical clarification:" I'm here live. I am not a cat. "Before this statement, another lawyer also present, who had remained serious throughout the conversation, looks at the screen and outlines a smile." I see it, "the judge answers.

The video was posted at YouTube account of the District Court 394 of Texas and was shared by the judge himself on Twitter, who takes the opportunity to give some advice to Zoom users: "If a child uses your computer, before joining a virtual visit, check the Zoom options to make sure the filters are off. "

He adds: "These fun moments are the fruit of the dedication of the legal profession to ensure that the judicial system continues to function through these difficult times. Everyone involved handled it with dignity, and the filter attorney showed incredible grace. True professionalism in every sense!".

Ponton, who does not have a profile on the social network, learned of his fame when, just an hour after the hearing ended, he was receiving calls from journalists to interview him.

The lawyer has taken it with humor. "If I can make the country laugh for a moment in these difficult times that they are going through, I am happy that they do it at my expense," he told the New York Times.

The incident did not take long and in less than a minute he was able to figure out how to deactivate the filter. "My face, older and less funny, appeared and we continued with the view." She also says that the computer belonged to her assistant and that she was "embarrassed" by what happened.

The Euribor closes June at 0.852% after the largest monthly rise in its history