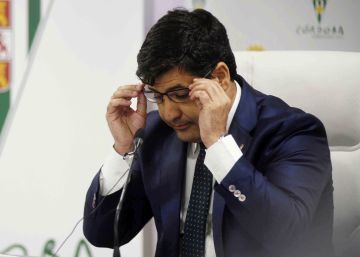 Agents of the Civil Guard are registering from the early hours of Thursday morning the headquarters of Córdoba CF, which has its offices in the El Árcangel stadium in the Andalusian city. The offices of the club's foundation and the address of the president and top shareholder of the club, Jesús León, are also registered, according to sources close to the investigation. The Andalusian businessman, a 42-year-old Caminos engineer, bought 98.8% of the club's shares in December 2017 from the previous owner, Carlos González, and was appointed president on January 19, 2018. Córdoba is framed in the group 4 of the Second B, where he marches in eighth position. The Operation occurs within an investigation for a corporate crime. Detention is not planned, according to the sources consulted.

In his business side, León has cultivated a trajectory of taking on troubled companies, such as the construction company Almeria Grucal, from which he established one of his connections with the world of football. It was the company that took care of the construction of the sports city of Granada, in 2014, the time when Quique Pina He directed the club, the same in which he closed an agreement to build equivalent facilities for Córdoba, which did not materialize. A few months before he had taken another step in that industry, by acquiring part of the shares of Seville José María del Nido, who ended up buying them shortly before entering Córdoba.

Valencia CF: Rodrigo: “We put the dust under the carpet and we didn’t react until people started dying”

Real Madrid: Jovic Report: his wish, the offers that appear … and that call from Zidane