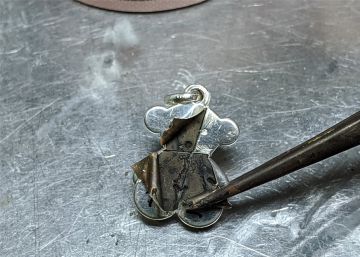 Tous breaches the law when selling jewelry pieces filled with a non-metallic material, says a Civil Guard report that works in the summary of the investigation that the National Court has opened against the company for alleged fraud and misleading advertising. The report states that “it is felt that the purpose of this practice is to reduce costs” by maintaining the weight and appearance of a solid piece.

The tests carried out before a notary by the association of consumers and users of jewels Consujoya, who was the one who denounced the case, allow the Civil Guard of Córdoba to maintain in its report that Tous markets under the name of first law silver pieces that “are in its interior filled with a non-metallic material ”. A practice that, according to the analysis of the legislation that researchers do, is not legal. The filling of precious metal pieces is only allowed, the report adds, “in three cases that do not correspond to those studied”: it can be used to give stability only to vessels, candlesticks or the like, but “not for jewelry pieces”.

The Civil Guard also ensures that the laboratory in charge of the contrast – the mark that is engraved on objects made of precious metal as a guarantee of its purity – must “verify the density and the law” and notes that the Applus Laboratories laboratory with which it works Tous “should have detected the presence of a non-metallic material.” He adds that the law requires that the composition be the same in all parts of the object, and concludes: “These pieces should never have been contrasted as silver of first law.” The researchers believe that the company is “in collusion” with the laboratory.

José María Bosch, CEO of Tous, acknowledged yesterday before the judge that the silver pieces With the shape of the iconic brand bear they are filled with a material similar to methacrylate, but he added that it is a technique allowed by law, legal sources reported. “We are satisfied with how the appearance has taken place,” Tous said later in a statement. The Spanish Association of Jewelers, Plateros and Watchmakers came out in defense of the Catalan company with another statement in which it said that Spanish law allows the manufacture of objects with precious metals with fillings and that the technology used by Tous is “common, normal and habitual in the sector ”.

That technique, called electroforming or electroforming, was the protagonist of the interrogation to which prosecutor José Javier Polo submitted to the head of Tous. “Fillers are part of the technique of electroforming that allow to provide the jewel with volume and vary the design, ”says the statement of the association of jewelers, in line with what was declared in court by the head of Tous. The association adds that the use of this filler does not reduce the alloy law, that is, that a silver jewel can carry it and remain a sterling silver jewel.

The two Tous pendants that the complainant association took to the Ecomep laboratory in December 2018 to analyze its silver content were “illegally commercialized,” says the report, signed by its director, Fernando López Gómez, and accessed by EL PAÍS . The document concludes that the pieces “cannot be contrasted” because the regulations of the Law of Precious Metals prevent it when they contain a different metal filler than those listed in the standard. Lopez testified before the Civil Guard and said the pieces were jewelry, not jewelry, as published The Independent.

The company has filed an appeal against the order of Judge Santiago Pedraz in which he agreed to the first proceedings and cited the heads of Tous and the Applus laboratory as investigated. It requires that bail be imposed on the popular accusation and denounces that it is moved by “spurious” interests, according to legal sources.

“The technique they use is not regulated by law. That they say that it is plated or that it has a gold or silver plating, but that they do not sell it at the price of gold and silver when it is not, ”said Magdalena Entrenas, the lawyer of the denouncing association, after the statement. “They refuse to understand that what they have to sell is jewelry,” he said.