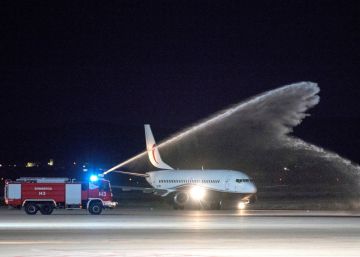 A 747 plane from Castellón airport, in which only its crew was traveling and which has been hired by the Manchego airfield itself, landed last night in the Ciudad Real Airport, thus formalizing the reopening of national and international air traffic of this infrastructure after eight years of inactivity.

The CR International Airport SL bought the airport for 56.2 million euros in April 2016. The sale process of the Ciudad Real airport, its day baptized as Don Quijote, began in December 2013 when, after entering into bankruptcy proceedings in June 2010, it was put up for sale by the bankruptcy administrators at a price of 100 million of euros.

However, this Thursday has been a symbolic flight and in fact the terminal is not open because there are no commercial flights, neither the cafeteria, and most of the facilities are restricted access.

This is the only private-managed international airport in Spain, although it has cost hundreds of millions to the taxpayer since it was promoted by the regional government of José Bono and, subsequently, that of his successor and companion of the PSOE José María Barreda. The original project was 100% financed by Caja Castilla La Mancha (CCM), then controlled by the regional Executive, who assumed a credit risk of 337 million euros. The fund was also the main shareholder of the original developer, with 68% of the capital. CCM had to be intervened by the Bank of Spain to save it from bankruptcy and subsequently sold to Cajastur, after a strong injection of public money.

The airport of Ciudad Real, along with others such as Murcia or Castellón, became a symbol of the waste that the different administrations, particularly the autonomous and municipal ones, undertook, in equipping themselves with infrastructures of doubtful need, and which soon became facilities Fantasma without any activity

The plane from Castellón landed at 9:02 p.m. Thursday and was baptized on the runway by the services of the airport's fire station. The Ciudad Real airport, which from 00.00 on September 12 is licensed to operate, has the flight license granted by the Ministry of Development, after the State Air Safety Agency (AESA) authorized its opening to air traffic.

Rafael Gómez Arribas, president of CRIA, has offered in the early hours of Friday with a small group of managers and authorities, among which were the Minister of Economy, Business and Employment of Castilla-La Mancha, Patricia Franco; the Minister of Equality and Government Spokesperson, Blanca Fernández and the president of the Diputación de Ciudad Real, José Manuel Caballero.

The businessman, who has acknowledged that they have been "hard and difficult four years", has thanked the administrations and the head of the First Instance and Instruction Court 4 and the Mercantile of Ciudad Real, Carmelo Ordonez, who will trust them so that Ciudad Real had "an international airport open to air traffic."

And he has been convinced that they will achieve the success of developing the airport's business plan, which among its most important challenges includes "commercializing the eight million square meters it has available".

Ciudad Real Airport plans to invest 18 million euros in the coming years to develop its business plan, with which it expects to generate 650 jobs, between direct and indirect jobs, although according to Gómez Arribas these figures "will remain small" . More than 30 contracts for the provision of services or supplies have already materialized that allow the airport to operate with all guarantees.

The business plan will focus on strategic lines related to aircraft maintenance, projects related to technological research and logistics, and the training of pilots, mechanics or ground personnel. Other business lines will be private aviation, commercial aviation, industrial development and film filming, among others.

Ciudad Real Airport, which will operate with the Aerodrome Flight Information Service (AFIS), is compared to other airports in the Aena network, such as the airports of Burgos, La Gomera, Huesca, El Hierro, Córdoba or La Seu D'Urgell-Andorra.

Ecological organizations such as SEO / BirdLife have lamented, through social networks, that the Ciudad Real Airport returns to "take off" without having fulfilled the conditions of two environmental impact statements and have wondered if this situation, which considers them " turbulence "may end" in a forced landing, "reports Efe.

Likewise, they have indicated that the non-compliance with the environmental impact statements that have not been approved "puts all the biodiversity at serious risk" that surrounds this Airport, built in a Special Protection Area for Birds (ZEPA).