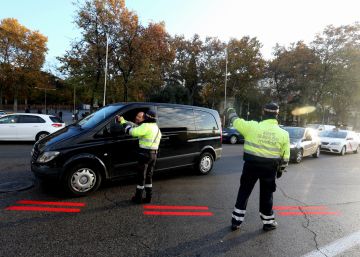 The City Council of Madrid has confirmed to EL PAÍS that the fines for improperly entering Central Madrid will be reactivated this Monday. The Consistory received this Friday, five days after the entry into force of the moratorium approved by Mayor José Luis Martínez Almeida (PP) -who governs the capital together with Ciudadanos- the ruling of Court 24 of the Contentious-Administrative Court of Madrid that imposes as a "provisional precautionary measure" the suspension of the moratorium on sanctions, a decision not it can be appealed. But having received it later than 3:00 pm, for legal purposes of notification it will be considered received on Monday morning. For this reason, The fines will apply from Monday, July 8. This Saturday and Sunday, therefore, all cars without environmental label can circulate freely and will not be fined, although on Saturday much of the center is cut by the manifestation of the Pride.

"Orders have been given for immediate compliance with the contents of the order regarding the most precautionary measures to suspend the moratorium on fines," a municipal spokesman explains. The City Council now has three calendar days to present their allegations, that the judge who has signed the order suspending the moratorium, Jesús Torres Martínez, will take into account before adopting precautionary measures, which may keep the situation as it is right now or return to leave the moratorium in force. (Here you can see in full the car that paralyzes the moratorium on fines of Central Madrid (PDF))

"Taking into account that this weekend the area of ​​Madrid Central is mostly cut by the celebration of the Pride and, above all, that the car was communicated on Friday after 15.00 hours (so for the purposes of deadlines of resource is as if it had been communicated next Monday), the sanctions will begin on Monday, unless later the judge, in its resolutions, imposes some retroactivity, "the spokesman adds.

The fines for access without permission to Madrid Central are 90 euros (45 for early payment). Residents and vehicles tagged with the DGT Zero and Eco can enter the low emission area. Those with badges B and C can access the area only if their journey ends in a parking lot or if they have an invitation from a resident. Unlabeled vehicles can not be accessed, although by 2020 those who have an invitation can do so.

The PP also proposed its own Central Madrid. The projects to restrict the traffic of Ana Botella (PP) 2014 (in blue) and Manuela Carmena (Now Madrid) in 2018 (in red).

In the perimeter of Central Madrid there are installed 115 cameras that monitor access to the restricted area, 60 at the entrance and 55 at the exit. These cameras, which have been in tests since December, register the license plates of the vehicles that enter the area and the ones from which they exit. In the public and private car parks, access cameras register the same information and send it to the City Council. The Consistory crosses data and discriminates who are residents, who have permission to access and who do not.

The City Council does not report

Some 1,600 national and municipal police will be responsible for monitoring the central acts of the Pride, especially the demonstration and the subsequent parade of floats between the squares of Atocha and Colón. The device is completed with 215 Samur-Civil Protection personnel each day and about 230 firefighters.

The National Police will deploy about 1,000 agents from different units such as Police Intervention (riot police), Special Operations Group (Geos), canine guides or subsoil specialists. The agents of the hate crime group, belonging to the Provincial Information Brigade, will be distributed through the parade zones and through the Chueca neighborhood to fight incidents based on prejudice based on sexual orientation and identity. The police have broadcast the free telephone number 900 100 091 to report these crimes. It works 24 hours a day.

The Municipal Police has planned a device of 600 agents for these acts. Yesterday there were about 150 volunteers to cover all positions, but the general commissioner and head of the body, Teodoro Perez, announced that, in case of not filling the seats, will be suspended the libranzas of the agents.

The route of the demonstration will start at the Paseo del Prado, at the height of the Moyano slope and continue through the squares of Canovas del Castillo and Cibeles to end at the Colón, after passing through Recoletos. The police have announced that they will cut off and divert traffic along the entire route, as well as on the stretch of the central Paseo de la Castellana, between the plazas of Colón and Emilio Castelar. The traffic cut is scheduled for five in the afternoon. There will still be cuts to traffic in the area at least until three in the morning for cleaning.

For now, the official Twitter account of the Madrid City Council (@Madrid) has not reported this judicial decision, despite the numerous complaints from citizens to do so, and the municipal spokesman does not know when to precise it. That account, however, yes it informs about traffic and pollution data not approved by the experts. The spokesman does not explain how many complaints the Consistory has received for actually eliminating Central Madrid, although some media have published that have been 22,000 in just four days (The average until the suspension of this measure was about 300 a day).

The suspension of sanctions approved by the Consistory it became effective on July 1, but the City Council agreed on the measure on June 27. "The judge's order admits the appeal, but also suspends the agreement of the Junta de Gobierno of June 27: Central Madrid is now in force as we have known these months," said Paco Segura, coordinator of Ecologists in Action, which together with Greenpeace – and other organizations that form the Platform in Defense of Central Madrid, which brings together more than 80 entities – had presented an administrative contentious appeal against the right moratorium early this Friday. A day earlier, on Thursday, the PSOE had also gone to the courts to demand the annulment of the municipal decision to consider it "illegal". In this case, the judge has decided to listen to the City Council before issuing precautionary measures.

Since the start of the moratorium, last Monday, the capital has suffered traffic jams and collapses both in the interior of Central Madrid (with an area of ​​4.7 square kilometers) as in the M-30, but also in the vicinity of the ring road and access roads. This is verified by the Mobility Management Center, dependent on the Consistory. Although it is a municipal agency, from the City Council began a war of figures and they contributed their own balance: "There has been no negative repercussion neither in the traffic nor in the quality of the air", affirmed this Thursday Borja Carabante (PP), delegate of Environment of the City council. The Municipal Transport Company, according to the information published in its daily report on its public bus network, has recorded incidents and delays throughout the week.

The Community of Madrid, governed by the PP, has tried to torpedo in all possible ways Central Madrid. The Executive of Angel Garrido (now in Citizens) took to the courts the star project of Manuela Carmena "for lack of paperwork" and requested precautionary measures to stop it. The Superior Court of Justice of Madrid (TSJM) has twice rejected the requests of the regional government, although he has not yet pronounced on the merits of the matter. Madrid Central has faced the Community and the City Council from the beginning. In October, the regional administration asked the Government of Carmena not to carry out the measure. Once it was successfully established, on November 30, the Executive of Garrido did not reinforce public transport as requested by the Consistory (in part due to the lack of trains and train drivers in the Madrid Metro). And then he took the measure to court.

Now that the mayor, José Luis Martínez-Almeida (PP), has left without effect the fines of Central Madrid, the PSOE and environmental organizations have denounced the City Council for removing the special zone, the opposite for what the Community denounced (establish it ).

Before the start-up of Central Madrid at the end of 2018, there were already four areas in the capital where access to cars is limited (residential priority areas or APR of Cortes, Letras, Embajadores and Ópera), which were included in Central Madrid.

Pollution has become one of the main concerns of cities. The European Environment Agency estimates that in Europe there are More than 400,000 premature deaths per year due to pollution (In Spain, 6,084 annual deaths are attributed to exposure to nitrogen dioxide). Until now, cars occupy most of the urban space: in Madrid, for example, 80% of the city. That is why City Councils want to redimension their streets to protect health and the environment and give greater prominence to pedestrians and other types of mobility. London, Berlin and Paris advance in this line, such as Barcelona, ​​Seville, Pontevedra and Zaragoza.