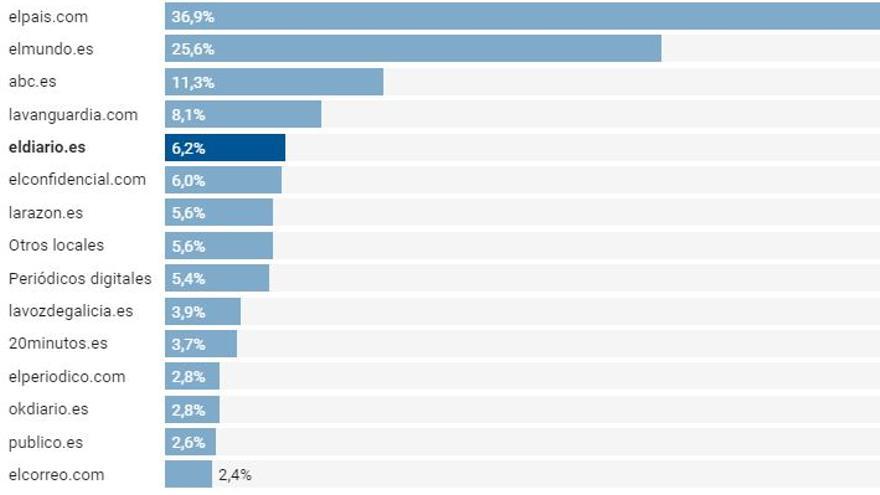 elDiario.es is the most widely read native digital medium in Spain, according to the latest barometer of the Sociological Research Center (CIS). This header revalidates like this the position from a year ago and it remains ahead of all the other digital newspapers without a paper edition: ElConfidencial.com, OKDiario.com or Publico.es.

Of the total of those surveyed, 59.8% claim to have read some ‘online’ headline in the last month. Among all the newspapers read in digital format (native or not), elDiario.es is in fifth position, only behind headlines with decades of experience, such as El País, El Mundo, ABC and La Vanguardia.

The CIS also asks about the use of social networks. The average time that respondents spend on Facebook, Twitter, Instagram, etc., stands at 137 minutes per week. 12.3% of those interviewed claim to have used these media between 30 minutes and an hour; 19.8%, between one and two hours and 15.8%, between two and four hours.

The barometer published this Thursday by the CIS is the third focused on the effects of the coronavirus. It can be consulted here in PDF.

This report shows that 59.2% of Spaniards believe that both the central and autonomous governments they should have taken stricter “control measures” to tackle the pandemic.

Last September another report, the one prepared by Mikroscopia, also ranked elDiario.es as the most widely read digital native and the fourth among the digital newspapers (native or not) preferred for information. elDiario.es is also the medium that has grown the most since 2015 (155.1%), the first year in which this study was conducted, which consists of 7,625 interviews and is conducted by 40Db.