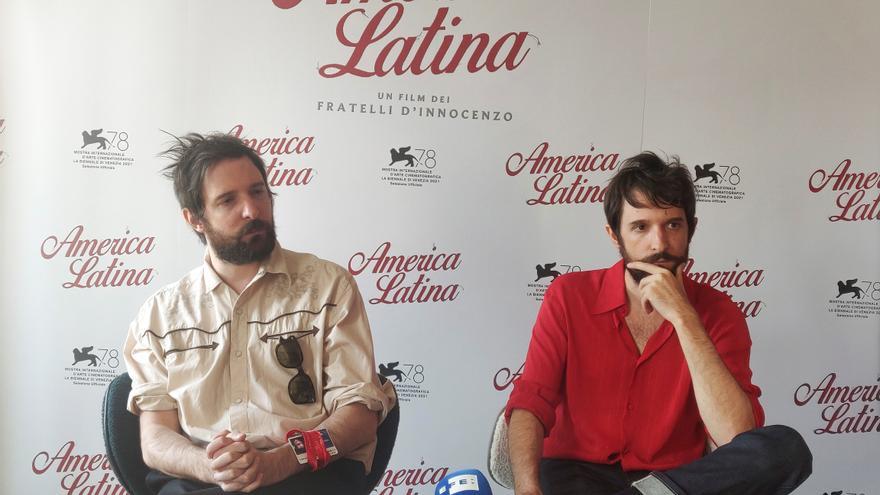 Venice (Italy), Sep 10 (EFE) .- Two twins compete together for the Golden Lion of Venice. The young filmmakers Fabio and Damiano D'Innocenzo make films to tell what they cannot express in words and the result has been the dark "Latin America", which shook the festival: "The cinema must create an emotional earthquake", they allege in a interview with Efe, aware of the commotion.

"We believe that the cinema must sting, it must create an important experience from the sensory point of view, grasp by the collar of the shirt, when it is a large cinema it has to create an emotional earthquake", maintains Damiano, the more loquacious of the two .

Italians have written and directed "America Latina", the story of a gentle dentist (Elio Germano) who one day discovers a mysterious woman tied hand and foot in the basement of his house, in the middle of the desolate Roman outskirts.

The unpredictable finding provokes a descent into hell in which the protagonist must question his own existence, his contradictions and demons, and above all the concept of belonging to a place, a family and an entire vital scheme.

The goal, they explain, is to see "the light" from the dark.

The brothers receive this agency in the room of a luxurious hotel on the Lido and immediately confess that they have read "mixed" reviews. And the truth is that his film shook the debate at the Mostra, especially about the mystery that its meaning entails.

The first question is natural and comes out point blank: Why the title of Latin America? Fabio explains that it has nothing to do with the continent but that it is the conjunction between two ideas: America as the land of dreams and Latina, the town of the Roman periphery where "reality is sadder and more unfortunate."

And in the middle of both worlds is its protagonist, a Charon who navigates in the abstraction between that light and that vital darkness.

The D'Innocenzo brothers (Rome, 1988) are two of the filmmakers with the greatest projection in Italy. His name began to emerge as the authors of the screenplay for "Dogman" (2018) by Matteo Garrone and his second feature, "Dear Neighbors" ("Favolacce", 2002), won the Silver Bear at the Berlinale.

His love for cinema emerged "very early", explains Fabio. At home, from childhood, they watched intense films that "deeply disturbed the interior", such as those of Luis Buñuel, Pier Paolo Pasolini or Bernardo Bertolucci.

So they decided to resort to a type of art that would allow these twins to express their vast inner world and avoid a shyness that they do not hide at any time, but rather recognize.

"We looked into each other's eyes and we thought it would be beautiful to tell stories like this, as we are people with a low communication capacity, with an art that allows us to express ourselves with images, suggestions and sounds, evoking more than declaring", he emphasizes.

Damiano, for example, insists that to make movies it is necessary to meet with many people and ask for a lot of money: "These are things that are not our competence and that are not easy for us," he confesses.

Instead they are passionate about literature, poetry, photography and painting and it shows in their work.

In "Latin America", for example, the influence of the Canadian painter Alex Colville plans, as Fabio recognizes, because the idea, as in his paintings, has been to "flesh out" the nucleus of all tinsel and leave only the essential: a man with your doubts in an isolated house.

For the moment the stratagem works and in their films the two twins manage to encompass all their artistic passions: careful photography, deep and thoughtful philosophical reflections, carefully written scripts and a whole poetic language.

"But I do not have the pride of thinking that by force in twenty years we will be here talking, aged. We will do it until we have something to say, the rest is liquid, it is superficial to talk too much", ditch Damiano, asked about the future.

Fabio knows that they speak of profound concepts but he believes in cinema as "the last great democracy possible". In what sense? The answer is blunt: "The possibility of attending to a story without its conclusions being confirmed by a Demiurge", by its author, that is, that each one has their own idea of ​​what is seen.

What does seem clear is that they will continue to shoot together as they have been up to now.

"I would never exchange a feeling in the past with my brother for another person, because I know that he manages to descend more deeply into things. And it is something that I know, that inspires me a lot. I spend all my time with my brother, and if in That is when the possibility of shooting a film arises, the better, "says Damiano.

Because for them shooting together behind the same camera is ultimately like "sharing breakfast or cheering for Roma", something they were born for.