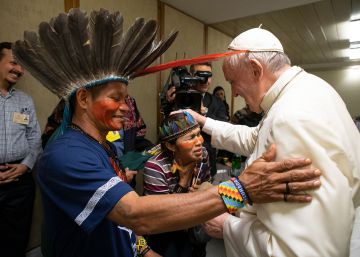 The synod on the Amazon held during the month of October in the Vatican It closes with a great novelty. Two of the great proposals that had been drawn up by a large group of bishops from the Amazon, the ordination of women deaconesses and married men in areas where the faithful cannot receive the Eucharist, received an important boost yesterday. The assembly of bishops, in which 185 synod parents with the right to vote participated – and a large number of experts and rapporteurs – recommended that in some areas the possibility of ordering men with families be studied. A decision that the Pope must approve, but which supposes a historical opening of the Church and puts on the table the question of celibacy.

The assembly of bishops held in the Vatican since the beginning of October was aimed at discussing the protection of the environment in the Amazon, about the indigenous communities that populate it and, particularly, about the possibility of ordering married women and men to make up for the lack of priests This last point has been voted in favor by 128 members and against by 41. A low approval with respect to the rest of the proposals, but sufficient so that the Pope must now study his approval in the apostolic exhortation he will write before the end of the year. Regarding the matter of ordering deaconesses, also strongly answered, Francisco announced that he will reactivate the study commission.

The decision of the synod has a historical character and, although the document explicitly states that it refers only to the matter of the Eucharist, it deals collaterally with such a thorny issue as celibacy in Catholicism. The ultraconservative sector of the Church has already expressed in recent weeks its full rejection of this possible opening, considering that it would clash fully with Catholic doctrine. Its great promoters, such as Bishop Erwin Kräutler, insist that it only has to do with the Eucharist. However, this prelate also pointed out – in an interview with THE COUNTRY – that the possibility of accessing the sacraments is above "the grace of celibacy."

Point 111 of the voted document thus explains the question: “We propose to establish criteria and provisions on the part of the competent authority […] of ordering priests to suitable and recognized men of the community, who have a fruitful permanent diaconate and receive adequate training to the presbyterate, being able to have a legitimately constituted and stable family, to sustain the life of the Christian community through the preaching of the word and the celebration of the sacraments in the most remote areas of the Amazon region. ”

The opening, in addition, not only affects the Amazon. According to the written text, it is recorded that "some spoke for a universal approach to the subject." A nuance – "some" in Vatican terms would mean a considerable number – that broadens the horizon of openness and will generate a heated debate in the Church in the coming months.

Francisco also advanced that he will provide the commission with more personnel to study the possibility of ordering deaconesses. An organ created in 2016 and after two years of study came to a standstill on what was the role or if there were so-called deaconesses in the early years of Christianity. During this synod, the need to give greater relevance to women in the Church was widely addressed, since in the Amazonian communities they are essential for functioning, as all participants recognized. The pope said he "picks up the glove" that the women threw at him during the synod of being heard.

The problem of women, however, is more complicated. The permanent female diaconate did not have much chance of getting ahead because it had already been analyzed in parallel in the aforementioned commission. The route proposed so far to accept it, claiming that in the early days of the Church there were ordinations of women similar to men, does not enjoy a relevant consensus to date.