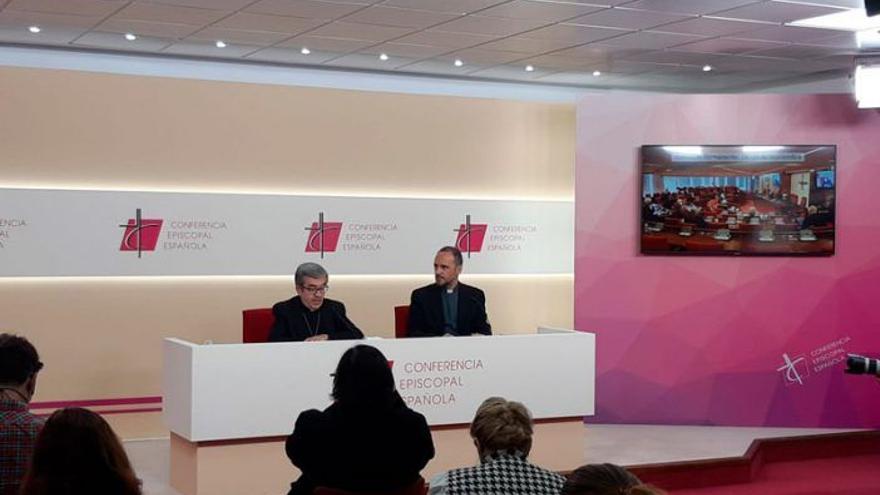 Two years after defending the ‘therapies’ promoted by Reig Pla in Alcalá, and after the scandal of the resignation of Bishop Novell, the Spanish Episcopal Conference pointed out that “we do not approve any conversion therapy.” “The Church does not recognize itself in these matters, we have no authority to talk about therapies,” said Luis Argüello, spokesman for the Episcopal Conference, at a press conference, in what is the first condemnation of this type of restorative therapies, which have been the subject of an investigation by the Vatican and that they are behind the abrupt, and unexplained, departure of the Bishop of Solsona from his post.

At the end of the Permanent Commission, in which Argüello asked Isabel Díaz Ayuso and VOX to “read” the Pope’s letter on the errors of the Church in the conquest (“It’s just a page,” he lamented), the auxiliary bishop of Valladolid denied “Catholic” legitimacy to the ‘Truth and Freedom’ association, one of those that practiced this type of ‘therapy’. “It is not a Catholic association, although it is true that there may be Catholic people in them. But each one has a responsibility and must assume it,” he concluded.

Regarding the bishop emeritus of Solsona, Xavier Novell, the bishops’ spokesman stressed “the great pain and perplexity” that the scandal has caused the Spanish Church, and that not even the bishops themselves (who spoke about the issue at this meeting) understand . At this point, Argüello admitted that Novell “is a public figure” and that, as such, he must give explanations, although he asked “time” for him to offer them. Thus, he pointed out that it would be good “to know in depth the circumstances”, which “suggest some crisis of faith, affective or exercise of the ministry” and that, he understands, “they need time to be elaborated.” At the same time, he confirmed that, for official purposes, Novell is still bishop emeritus (he has not been granted secularization at least for the moment) and that, as such, the Church continues to send him his salary.

Abortion and the green hoopoe

More controversial were their responses to the law that seeks to make the rallies in front of the abortion clinics a crime. “The worrying thing is that the interruption of a life is considered progress, and that it is considered not conservative, but ultra-conservative, to oppose abortion, and it is super-progressive to defend the wolf, or the green hoopoe, or the eggs of storks, which do not nests can be dismantled because they are a protected species. How can human life not be considered a protected species? “asked Argüello.

After admitting that “abortion is a drama, first of all for the woman who leads that life,” Argüello criticized that “the death of a new life in the mother’s womb is considered a right, and that there is no right to presence in the public square to be able to pray, to be able to offer these people other possibilities and help. It surprises me “.

For the spokesman of the EEC, the presence of these people next to the clinics “wants to remember, with prayer, the sacred dignity of human life, and with information, that there are alternatives to abortion.” At the same time, he stressed that, on more than one occasion, some women “have changed their decision.”

“This is not a matter of faith, but of science. Science tells us that there is a new life, with its own DNA, with its own genome, with capacities to grow and develop that, if not interrupted, will give birth to a new one. life that already is, “said Argüello, who was against the registration of conscientious objectors to abortion, underlining that” at this time, forcing an objector to also have to register in advance … affects their rights. ”

Finally, questioned by the case of Cesáreo Gabarain and the possibility of his songs being banned at masses, the spokesman for the EEC described this possibility as “a typical condemnation of medieval times, of the sanbenitos.” It would be good if we could distinguish: to say that the musical work of this person is contaminated by what he could have said or done, seems exaggerated to me. Their songs will have to be valued for their musical quality, for what they can say or mean. ”

“The EEC has no decision to open any investigation,” Argüello concluded. The dioceses affected? “Frankly, I doubt it. We are talking about Cardinal Tarancón, deceased; that person, deceased. Those involved have died.” Not so the victims.