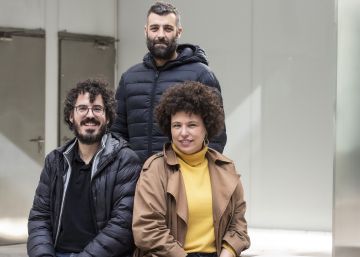 The day the journalist Emilio Mediavilla (Santander, 40 years old), editor of KO Books, He received the first Anagrama Sergio González de Crónica Award, the journalist Leila Guerriero, next to her and a member of the jury, said something like this, according to the winner: “There are more congresses and workshops of chroniclers than chronicles in the media.” It is not the first time that this journalistic genre is questioned.

Like the novel, the chronicle is killed, revived and condemned again from time to time. In Latin America, as if it were the myth of Lazarus, he always walks again, even with crutches. In Spain, this way of telling reality with the tools of literature often goes back to what happens on the other side of the Atlantic. Apart from the nth epitaph, there is a Spanish generation – they do not coincide in age, but in place and time – that strives to practice the chronicle.

“When reading the manuscript I felt what it always feels like a good chronicle. An interest in something that in principle I didn’t give a damn, ”Guerriero said of the award-winning work, A dacha in the Gulf. Mediavilla’s unpublished book is about his two years in Bahrain. But since 2011, this author and a group of journalists (and friends) have upped the ante for this genre through the publishing house KO books. What began as “a whim” has become one of the few labels in Spain that remains true to the chronicle. His editorial work was based on Anagrama. “We are interested in profiles, sports chronicles, microhistory,” he says. “It is not the subject, but the look with which you approach and the narrative format.”

In September 2015, KO books published Fariña. The great chronicle about the Galician narco of journalist Nacho Carretero that allowed them to save the publishing house (it was not going through its best economic moment) and that has resulted in a series of Netflix, among other variants, including a play. “I grew up with the obsession of having to identify each text. The creativity of narrative journalism in Spain was self-limited, while in Latin America you could read journalistic pieces that looked like novels, ”says Carretero (A Coruña, 38 years old), a journalist for EL PAÍS. “Here was a gender restricted to those who had earned that condition, to an elite. A day-to-day reporter could not write chronicle. ”

The lack of space in the daily print media directs Spanish chroniclers to the book and specialized magazines. “Publishing chronicles is still something complicated and closely linked to the book industry,” says María Angulo, a PhD in Philosophy and Letters from the Autonomous University of Madrid and a professor of Investigative Journalism at the University of Zaragoza. “It is a luxury that many media cannot afford and does not feed, nor does it read or consume or buy as chronic as journalists think,” concludes the author of Chronicle and Look. Approaches to narrative journalism (KO books).

All journalists consulted for this report and those who appear in different anthologies on the subject edited by Darío Jaramillo and Jorge Carrión in 2012 make up a list of multitasking narrators. That is, dedicated to the chronicle and all kinds of jobs to ensure sustenance.

“This journalism requires time, space, money to travel, research and edit,” says Agus Morales, director of 5W, a publication in print and digital format that was born almost five years ago and that supports its raw material, the chronicles of international themes, thanks to the contribution of more than 3,000 subscribers and sales in bookstores and on-line. For the editor, the media have mostly focused their editorial efforts on the opinion: “It is more profitable, occupies less and is cheaper than telling what happens in a refugee camp in Greece, for example.”

Virginia Mendoza (Valdepeñas, 32 years old) explains that she has never gone to the generalist press in search of a space for her chronicles because for her “the extension is decisive”. His “slow journalism” based on “living with people” of which he writes fits in the book and in publications such as Altaïr. He gives an example: the 16 pages he dedicated to a trip through the Dominican Republic. “This is a rarity in Spain,” he says.

Altaïr Magazine He has just turned 40 with his commitment to “the traveling culture and the journalistic chronicle”, explains Pere Ortín, for six years the editor, as well as co-founder of the publication. “We do journalism from the trip and not from trips,” he says. That is, a more narrative journalism: “A mechanism to understand some aspect of the complexity of the world.”

The success of the clans of the Galician narco served so that Carretero, from the chronicle, could approach other types of stories. “The theme is linked to the ego of journalists and journalism. As if the most powerful stories had to be the most spectacular. Those of conflict, those of going away. The most idealized journalist during a time was the war correspondent. And this always squeaked me, ”he says.

The same opinion is shared by the journalist, and Silvia Cruz Lapeña (Barcelona, ​​41 years old), who specializes in cultural issues, is defined without further additions. “In my book Jonda Chronicle (KO books) I review a concert of Los Chunguitos in Barcelona that goes beyond music, explains a socio-political and historical context. It serves as an excuse for anything, it is the way to make more delicate topics such as unemployment in Jerez from flamenco. At the beginning of my book I write: flamenco is a key, a coat, not the subject, ”he says.

Mendoza focuses his work from anthropology, the career with which he complemented journalism and that serves to enrich his texts. “I’ve never had to resort to fiction or travel 5,000 kilometers to find an interesting story,” he says. “Among the neighbors of my town Terrinches, in Castilla La Mancha, I have found a way to tell the universal through the minimum,” he explains, putting his book as an example Who will close your eyes (KO books), on the roots in rural Spain.

“What this macro-genre of the chronicle has is its political commitment in the sense that the territories that are related and their protagonists are located on the margins,” explains Angulo. “The chronicle tries to put focus on what does not usually interest in more traditional journalism. There is the social commitment, even of denunciation ”. The author identifies in the period of economic crisis that Spain suffered since 2008 a moment of effervescence of the chronicle in Spain by the emergence of the stories that occurred then.

“The chronicle will be marginal or it won’t be,” Ortín paraphrases Martín Caparrós, one of the leading Latin American chroniclers. The challenge, before someone returns to kill the gender, will be to grow in those margins and not only when they come badly given, as in the economic crisis.