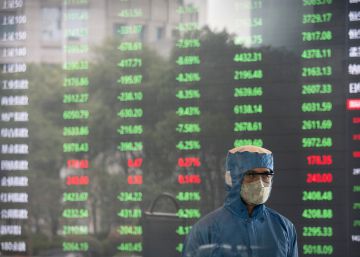 Weighed down by the impact of coronavirus crisis, the Chinese Bags have collapsed on Monday in their reopening after the lunar New Year holidays, which the Beijing Government has decided to extend four more days to avoid as much as possible the large agglomerations of people who can favor the spread of the virus. Although the Central Bank has promised a liquid injection of 1.2 trillion yuan (almost 154,000 million euros) to mitigate the economic impact of the epidemic, the main indicator of the Shanghai Stock Exchange, the SSE has fallen more than 7 , 7%, the biggest collapse since 2015, while the second Chinese parquet, that of Shenzen, has closed with a hit of 8.41%. European stock exchanges, for the moment, endure with timid rises lower than half a point.

The Chinese indexes had been closed last week for the New Year holidays and as soon as they opened, they have picked up the strong shocks suffered by the parquets of the rest of the world last week for fear of the economic effects of the coronavirus crisis . “Investor panic spread rapidly at all levels and will dominate the market in the short term,” said Yang Delong, an economist at First Seafront Fund, according to the AFP agency. In the Shanghai index, practically all sectors suffer falls and four fifths of the companies have dropped the maximum of 10% allowed. In a single day, more than 300,000 million euros have been evaporated in market capitalization, according to calculations of the financial newspaper Financial Times.

The efforts of the Chinese Government, which has promised 154,000 million euros to alleviate the crisis, have been of little use. “In order to maintain a reasonable and abundant liquidity in the banking system and a stable operation of the currency market during the period of control of the epidemic, on February 3 the BPC will carry out a market operation to inject 1.2 billion of yuan in order to ensure an adequate supply of liquidity, “the Chinese central bank announced this Sunday.

In addition, the Central Bank has lowered the interest rates applied to entities that participate in its short-term refinancing operations through which it has injected 154,000 million euros. Thus, the Chinese issuing institute has lowered to 2.40% from 2.50% the interest rate applied in the liquidity auction with a seven-day maturity, while in two-week operations it has cut the cost of financing in another ten basic points, up to 2.55%. However, some experts doubt that the rate reduction is sufficient to alleviate the economic damage of the virus.

In a press conference, the vice president of the National Commission for Reform and Development – the Chinese planning agency – Lin Weiliang, has recognized the negative effect of the virus on the economy, especially in the consumer sector. However, he has assured that the impact will be of short duration and the country, the second economic power in the world, has the resources to minimize it. The yuan meanwhile lost 1.5% of its value, drilling the key limit of $ 7.