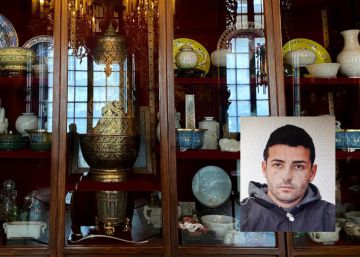 Steal in the Chinese museum of the castle of Fontainebleau, south of Paris, was priced at six figures. The Chinese mafia group was going to pay close to 800,000 euros to the band that was headed by Madrid’s Juan María Gordillo Plaza, alias El Niño Juan, so that various porcelain pieces from the collection of Asian art that the Empress Eugenie de Montijo, the Spanish wife of Napoleon III treasured for them, according to detail detailed to EL PAÍS police sources. Specifically, a part of the vases, vessels and other objects that contained one of the showcases of the exhibition whose photograph was found in the hands of Spanish criminals. Police sources suspect that El Niño Juan and the rest of his group also planned to steal other pieces, which they would then try to sell in Spain through Chinese peristas to increase the benefit of theft.

To perpetrate the coup, the famous luncheon had been accompanied by two other criminals well known by the Spanish police, Juan Carlos Quintero and Gabriel Lanzas, aka The American, specialists both in the theft of vehicles and the realization of butrones (holes in walls and armored doors to enter to steal). The other two components of the group, identified as Oscar Andreu and Juan Carlos Herranz, had a secondary role. The mission of both of them to acquire in stores the dark clothes and the locksmith equipment they needed to carry out the assault. Everybody they were arrested by the French police in the early morning of December 28 with a Chinese citizen identified as Hu Shouyang, 45, of which there is no police record in Spain or France. This is considered by the researchers the supposed link of the Chinese mafia with the Spanish group. He was in charge of paying the five Spaniards with his credit card all his expenses, from the accommodation to the acquisition of the material and the tickets to visit the museum that they were going to rob, and he shared a hotel with the group.

To perpetrate the coup, the famous lunatic had been accompanied by two other criminals well known by the Spanish police

The investigation that has allowed to break the robbery started in Spain, when information arrived at the organized crime specialists of the National Police that a well-known Spanish criminal had received the commission to assault in exchange for a large amount of money a museum in France dedicated to Chinese art, although then it was not yet known which one was specific. This information was made known to the French Police and marked the beginning of Operation Bambú. The follow-up of this individual, who used a vehicle on behalf of a company to travel, allowed to locate a second member of the group, with whom he traveled on board a car to France. There, they met with three other individuals who were finally identified as Spanish criminals. In total, they all add more than 120 police records for all types of crimes. For several days, the five, who pretended not to know each other, stayed in the town of Nemours, south of Paris and only 17.5 kilometers from the castle of Fontainebleau. First, at the Ibis Hotel. Then, in F1, where on December 26, just two days before the date chosen for the robbery, El Niño Juan held a meeting with three Chinese citizens, including Shouyang, according to police sources.

The police investigation suggests that the band’s plan was to storm the museum at night, once it had closed its doors to the public. For this, the members of the group were going to wear the black clothes they had just bought in a famous sportswear supermarket in the area and would carry the spikes, axes, flame cutting equipment and screwdrivers they had acquired for it. The point chosen to access the interior was a wooden door of the castle that had a trellis and that gave access directly to the rooms of the museum. Once inside, the objective was several objects that were marked in the photograph that they carried from one of the showcases of the exhibition and that they had located in the previous visit that at least one member of the group had made to the museum. To get to the place and then flee, the group had stolen a Mercedes Class A car and a Renault Espace using advanced technology. “They had left nothing to chance,” says the chief inspector of the National Police Heritage Brigade, Fernando Porcel.

In total, they all add more than 120 police records for all types of crimes

Finally, in the early hours of December 28, the day allegedly chosen by the band to perpetrate the theft, French police arrested Spanish criminals and to the Chinese citizen in the hotel and its parking lot. About one in the morning two Spaniards were arrested. Shortly after the alleged link with the mafia was arrested and he had paid the group’s expenses. And at six in the morning the last three Spaniards were finally captured. The six detainees remain in prison and the French justice accuses them of “participation in association of criminals with a view to preparing a crime”, as well as “robbery and reception in organized gang”. The other two Chinese citizens detected at the preparatory meetings of the assault, and who were traveling in an all-terrain vehicle with Italian registration, could not be located and remain on the run.