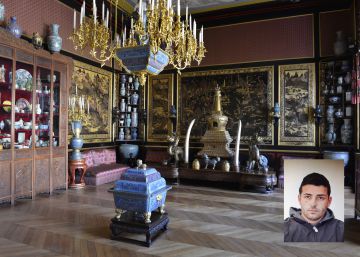 The ingredients of the case are: an alleged group of the Chinese mafia, a castle that is a Unesco world heritage for its history and its treasures, and five Spanish criminals whose records add up to more than 120 arrests. On December 28, the French police arrested these Spaniards and a sixth individual of Chinese nationality. Thus the peculiar details of the frustrated assault on the Chinese art museum of the castle of Fontainebleau have been uncovered. This royal palace, located 62 kilometers from Paris, was the residence of 34 kings and two emperors between the 12th and 19th centuries. Some of the pieces of the Chinese art collection treasured by Empress Eugenie de Montijo, the Spanish wife of Napoleon III, were precisely the objective of the frustrated coup.

Hispano-French police collaboration through Europol, which included the criminals' follow-up for more than a week, allowed to disrupt what would have been the last great robbery of 2019 and whose main ringleader was an old acquaintance of Spanish justice: Juan María Gordillo Plaza, known as El Niño Juan Because of his short stature. This famous criminal, born in the Madrid neighborhood of Orcasitas 33 years ago, has allegedly specialized in robberies to order.

The main police hypothesis about the new case is that it was a commission from a Chinese mafia group. With three members of this band the Spanish criminal met two days before his arrest to specify the details of the assault, according to police sources. In a telephone conversation held Thursday with EL PAÍS, the French police commander Jean-Luc Boyer, deputy head of the Central Office of Trafficking in Cultural Property (OCBC) admits that the Chinese track is "very important." "[Los españoles detenidos] they are organized crime professionals who came to commit a robbery in France, came for Chinese objects, and in the midst of all this we stop a Chinese citizen, that's why we privilege that track, ”he adds.

The so-called Operation Bambú, which allowed the arrest in France of El Niño Juan and his cronies, started in Spain. The National Police alerted Europol to their French colleagues that a group was planning an assault on a French museum, although the data collected had not allowed them to find out which one. They only knew that they were after pieces of Asian art. This detail and the follow-up of the suspects - both before and after crossing the border separately on two vehicles on December 21 - made it easier for investigators to fit the puzzle pieces.

They saw how the Spaniards went to the establishment of a well-known sports chain to acquire dark colored clothes, and, later, they bought an ax, spikes, screwdrivers and other material commonly used in violent assaults. However, the main clue that allowed to discover the objective of the band was the chosen accommodation: a cheap establishment in the town of Nemours, a hotel of the F1 company, which is only 17.5 kilometers from the castle of Fontainebleau. This monumental building treasures about 800 pieces of decorative art from the Far East, many of incalculable value, coming from both the seizures of the French Revolution, as of the looting of the Summer Palace in Beijing by Franco-British troops in 1860.

In 2015 he already suffered a robbery: in 15 minutes 15 valuable works were stolen from his collection of the so-called museum of China.

El Niño Juan and his Spanish accomplices, who were traveling in two vehicles - one of Spanish registration and another Italian -, pretended not to know each other, although surveillance allowed to verify the close relationship that existed between them: cars were exchanged in their journeys and visited the Eiffel tower and the stadium where Paris Saint-Germain plays. They also approached the castle of Fontainebleau, and visited him with the supposed intention of studying video surveillance devices and the position of security guards, in addition to taking note of the Chinese works of art that were allegedly stolen. Then they always returned to the hotel in Nemours, converted, according to the police sources consulted, "in their headquarters" for the assault.

In fact, two Spaniards held a meeting with three Asians on December 26 supposedly to specify the details of the coup. One of the latter, arrested later, was the alleged link between the executors of the robbery and its promoters. This Chinese citizen was responsible for paying with his credit card both the stay in the hotel of the band of El Niño Juan, as well as the tickets to access the museum that were subsequently located in a pocket of the clothes that one of the clothes was wearing. Spaniards arrested. Photographs of the works of art they had been commissioned to steal were also located on their mobile phones. “In 2015 the museum was already stolen and Chinese objects were stolen. The investigation makes us think that they wanted to steal only Chinese objects ”, emphasizes Jean-Luc Boyer, deputy head of the OCBC.

The arrests finally occurred in the early hours of December 28, the day chosen to steal, only 48 hours after the meeting with the alleged members of the Chinese mafia at the hotel. About one in the morning two Spaniards were arrested. Shortly after the Chinese citizen who had paid the group's expenses was arrested. And at six in the morning the last three Spaniards of the group were finally captured.

When they were interrogated by the French police, they all denied that they were preparing an assault and insisted that they were in France for tourism. A defense strategy, denial, which El Niño Juan always uses in Spain, where he presents himself as a humble autonomous electrician who works 10 hours a day and who knows nothing about sophisticated techniques to steal high-end vehicles. Despite not recognizing the facts, they all entered prison and have been accused of "participation in association of criminals with a view to preparing a crime", as well as "robbery and reception in organized gang," according to French judicial sources.

The investigation tries to specify the destiny of the objects that were going to be stolen. “Everything in the museum is invincible in the market. They are cataloged objects and that everyone knows. It is impossible to negotiate with that, unless it is a robbery ordered by a person or whatever, ”concludes Jean-Luc Boyer.