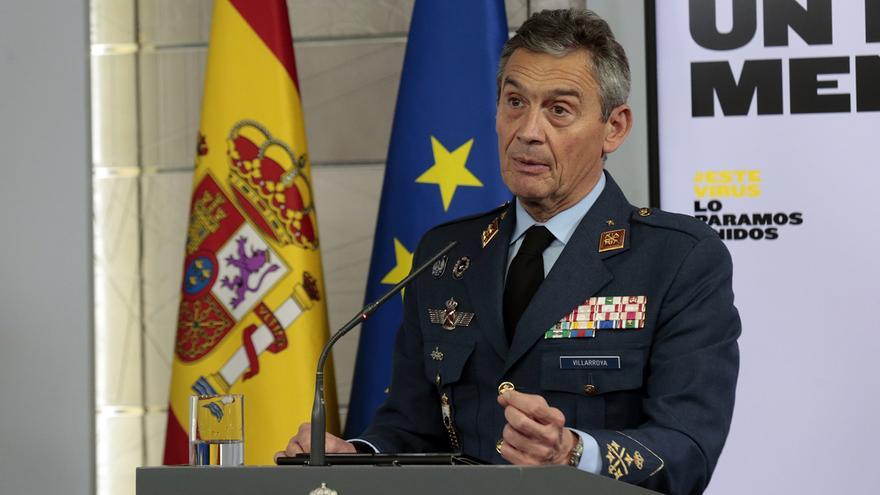 The Chief of Defense Staff (Jemad), General Miguel Ángel Villarroya, has resigned. The request for cessation has been made this Saturday due to the controversy for having been vaccinated together with senior Army officials. "With the aim of preserving the image of the Armed Forces, General Villarroya today presented to the Minister of Defense his request to cease his current duties," says the Ministry of Defense in a press release released this Saturday afternoon. –Although the statement assures that it has occurred first thing in the morning– after it has transpired that the Interior has ceased the Civil Guard liaison in the Defense Staff, which has also received the first dose of the vaccine.

"The Jemad points out that, in fulfilling its obligations, in accordance with the established protocols and with the sole purpose of preserving the integrity, continuity and effectiveness of the operational chain of the Armed Forces, it has recently taken decisions that it considers correct and that They have never tried to take advantage of unjustifiable privileges, but which are deteriorating the public image of the Armed Forces and calling into question the honesty of General Villarroya himself, "says the Defense statement, which ensures that the former Jemad has a" clear conscience. "

In his letter, Villarroya defends his performance "honest and dominated by the spirit of service and love for Spain" during his 45-year military career, according to the ministry note, which highlights his work as Jemad and, especially, in his attempt to bring the Armed Forces closer to the rest of the citizens.

Villarroya was one of the visible faces of the Government during the strict confinement by COVID-19 last spring and one of the senior officials who received the first dose of the vaccine against COVID-19. The Ministry of Health put in the hands of the Military Pharmacy Center some doses to supply them to the military health personnel and "exceptional cases" of the Armed Forces.

Defense Minister Margarita Robles said on Friday after learning that Villarroya and other senior Army officials had been vaccinated that she was going to ask Jemad for explanations. elDiario.es has asked the communication department of the Ministry of Defense for information about the vaccination protocol followed by the Armed Forces, but has not received any response. The General Staff drew up a protocol that prioritizes medical personnel, members of international missions and the chain of command following an age criterion, according to Europa Press.

After it became known that the Jemad and senior military officials had received the first dose of the vaccine, Robles asked Villarroya for explanations. United We can called for the removal of the head of the Armed Forces and assured that the minister should give explanations if a protocol has been drawn up "that has allowed those commanders to be vaccinated before the population or other soldiers at risk."

The Socialists, for their part, demanded this Friday from their public positions that they resign from their positions of responsibility if they have skipped the vaccination protocol. The PSOE, which has discharged those leaders from their membership, did not include Jemad in the package, however, as it was a technical and not a political position and left the decision in the hands of Robles. Peter Sánchez has valued the vaccination process in Spain during his speech before the Federal Committee of the party this Saturday and has assured that it symbolizes "the order of solidarity against the order of privilege."