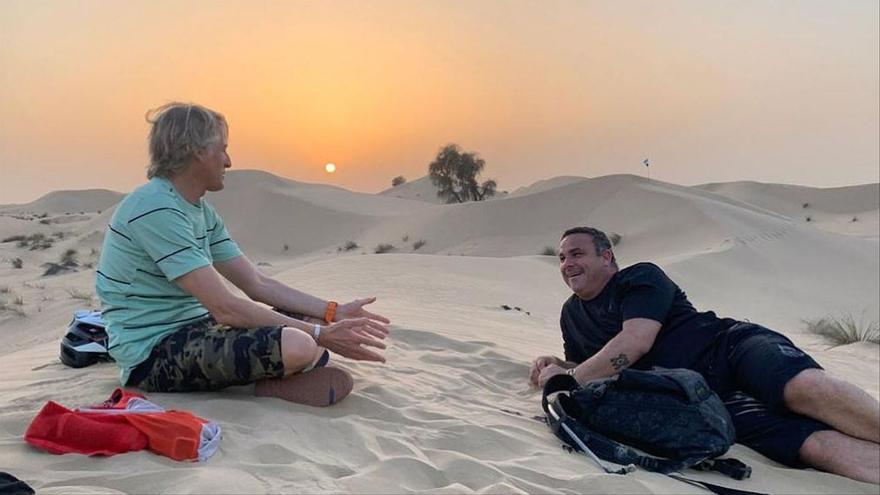 Ángel León looks three michelin stars by Aponiente, but that doesn't mean he makes a living from the restaurant. On the contrary. "The accounts do not come out. I have to go out to earn a living, I have to do a lot of bowling, go to TV, 'up', 'down'. Only one season did the accounts come out", explained the chef from Cadiz to Jesus Calleja during his trip to Dubai for the program 'Planeta Calleja' who has issued Four.

The chef of the sea justifies the impossibility of balancing the numbers when he explains that he can feed a maximum of 30 people and has 70 people on staff. An infrastructure that is too expensive that most three-star restaurants can hardly support if it is not generating income in other businesses. David Munozfor example, has raised the price of its tasting menu in diverse among other reasons, to make the business more sustainable.

The arrival of the pandemic has been the last straw for León. It had been closed for six months when it flew to Dubai, and Aponiente will not reopen until March. Each month with the shutter closed costs "almost 60,000 euros". "But we will recover, of course. And not only me, but also the cafeteria and the beach bar. All hoteliers. Spain needs joy and that we feed them, and we make people happy," he proclaims with conviction and enthusiasm.

During his journey, in which he rode a bike and drove a buggy in the desert, the chef from the sea explained that, despite having the restaurant closed, continued cooking for the most needy in the hardest part of the pandemic. "It was one of the most beautiful experiences of my life. We gave away free food thanks to anonymous volunteers who did not ask for anything in return when there was so much fear, and we all went with gloves, masks and gowns. I forgot about my problems and started to work for others."

León, who feels "proud of not having had to trample, shout or screw anyone's life to be where I am", explained to Calleja that good vibes rule among three-starred chefs ("we get along great, super good, but looking in the rear view mirror at what one and the other does because that keeps you in the gap") and that, often excited, he shares his discoveries with many colleagues, such as Joan Roca and Andoni Luis Aduriz. Precisely the Basque chef seems to him "the most creative chef, a gifted one": "You sit in Mugaritz and he blows your mind with a speech that no one gives you and you rethink many things as a chef".

What is clear is that the world of gastronomy is experiencing a bubble, "a balloon", as in his day happened with construction. "He will click and everything will fall into place. I never saw it logical for me to be constantly in the press and my father, who was a doctor [experto en transplante de médula ósea] and that saved lives did not even have a farewell party when he retired after 40 years dedicated to the sick. We have a very weak society. There are people much more important than chefs."

León is not the only chef who has been out of Spain on an 'adventure' these days. Alberto Chicote and Paco Roncero have shared a trip to Yellowstone National Park (USA) to take photos of wild animals.