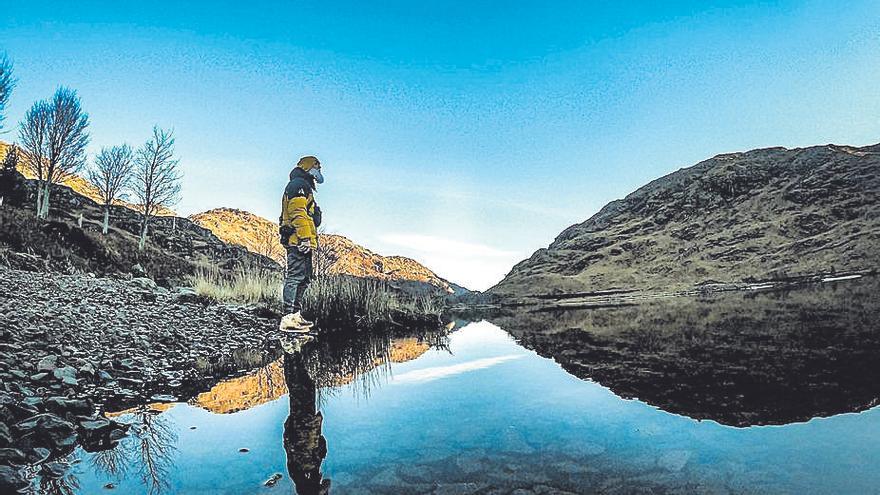 He chose Scotland because as a Canary, British law exempted him from quarantine. He landed in Edinburgh on November 29 and after two weeks touring the country it was time for the return and the nightmare. They asked for a QR and a test that he did not have. In vain the consulate interceded on his behalf. He had to extend his stay for five more days, pay a PCR and this Friday, back on the island, neither in Scotland nor upon arrival in Tenerife did they ask him for the test.

He is an islander with a restless nature, an unrepentant traveler, one of those who dares against wind and pandemic. Ankor Ramos, agent of the Local Police of Santa Cruz de Tenerife, takes advantage of any loophole offered by the tyranny of the work calendar to unleash his great passion: photography. And not even the long shadow of Covid-19 has been able to restrain this momentum..

In this constant search to capture new frames, he considered two alternatives. Turkey and Scotland were initially in his plans, but in the end he decided on the country of the thistle, perhaps inspired by the similarity of its flag to that of Tenerife: a blue background with two white blades. But the real reason for it was rather practical. “I consulted the official tourism page, Visit Scotland, where visitors were warned that according to UK regulations they had to comply with a 14-day quarantine upon arrival, but from which Canarian residents were excepted, who were differentiated from the rest of citizens of the Spanish State “, Explain. He knew he could take risks because of the ever-changing situation the virus is causing, but he felt supported by British law. And he didn’t think twice. On Sunday November 29, well stocked with a cargo of illusions, he embarked on a direct flight from Tenerife South to medieval Edinburgh, where he landed with the only company of his snoring and the night.

He has just joined the Local Police with his unit, in charge of maintaining the rules in the capital of Tenerife

After two intense weeks it was time to start the return. It was then that all those idyllic moments, those snapshots recorded on the retina and in the memory of digital cards gave way to a real nightmare. Even the cold turned into a huge fever. That Sunday, December 13, he will not forget as long as he lives: “I went to the airport to catch the 12:15 flight to Tenerife and, from the outset, it was impossible for me to download the QR required by the Ministry of Health,” explains Ankor . There his problems would not end. An employee of the airline Ryanair stationed at the counter demanded, uncompromisingly, the presentation of the QR and a PCR to board. “And although I accredited myself as a Canary, explaining and insisting that this test was not necessary for us and that the flight was direct, non-stop, he denied me access.” Desperate, and against the clock, he contacted the Spanish consulate, but despite the mediation of an official from the diplomatic office, the company employee was inflexible and again denied his boarding pass.

Out of options, disheartened and surrendered to his luck, he had no choice but to book five nights at a hotel in Edinburgh, an added cost to his budget, and wait patiently for the departure of the next flight to Tenerife, set for the day before yesterday, Friday December 18, also forced to buy a new ticket because Ryanair refused to accept the change. He also had to pay a PCR test for which he paid 80 pounds (88 euros), the most affordable price that he found compared to the 130 and up to 160 pounds (from 143 to 176 euros) that some laboratories asked for. “You are obliged to take the test within 72 hours prior to arrival at your destination. And it cannot expire before, of course, nor during the trip ”. So he did it on Tuesday morning. “There they have set up some tents in the airport area where people go with their cars, but of course, as I was going without a vehicle they directed me to a container and, sitting on a concrete block, they did the test”. That same afternoon they gave him the result, with a negative diagnosis, giving him a document certifying that he met the health requirements for travel. He was healthy.

Thus, backpack on his shoulder and with his PCR as a flag, equipped with the QR that his great friend Jesús Agomar was finally able to send him by email from the Island, he appeared at the Edinburgh airport ready to take the Ryanair flight at 6:40 with destination Tenerife South. They scanned the QR, all correct, but his surprise came when he was neither asked for the test upon leaving Scotland, nor upon arrival at the Reina Sofía. He definitely took it to hell. In Ankor’s judgment “It is not acceptable that we are subject to the arbitrariness of the airlines regarding the interpretation of the rules”.

At the time he was flying to the Island he had to return to work and it was yesterday, Saturday, when Ankor changed the camera for his uniform, deploying with his Local Police unit to ensure compliance with the measures arbitrated by the Government of the Canary Islands to prevent the spread of the virus. In view of how the Covid is hitting Tenerife, he has even come to think that perhaps he was safer there in Scotland, “where the situation is more relaxed,” he says. And, paradoxes of life, remember that when the confinement was decreed, his unit was the first to go out on the street, as the measures tightened they were also on duty and now, with the curfew, they are released again. What Ankor Ramos hopes is that people will become a collective conscience. “Our problem is not exogenous, but endogenous: parties, meetings … I think that here there is a great lack in terms of the sense of assuming that we are a community,” he concludes.

The wizard and the drone

Your choice of Scotland as a destination is focused on your vision as a photographer. “With the theme of the pandemic and as my photography is focused on people and natural attractions, I went in search of people and landscapes.” On Scottish soil he lived endless experiences, shooting his camera and his emotions without rest. “I rented a car and lurched” from the highlands to the rugged coastline. On many occasions, he faced the solitude of remote spaces, simply spectacular places where he was the only human being present. And he also experienced vicissitudes. “One day, the drone I was carrying was left hanging from a tree twenty feet high.” In that vast field he spotted some people and headed towards them. “I met a magician, one of our vitoriers, who was with his grandson, and I told him what had happened to me, hoping that he would give me a hand.” He looked at it with a certain slyness and approached the tree where the device was suspended. “From there, he reached for the mobile and called someone, who immediately introduced himself, climbed up the tree and released the drone.” It was three degrees Celsius and these people were in shirt sleeves. “He shook my hand and said goodbye.” No more. “Except for the Ryanair employee, who gives me that she was English, the Scottish people are great.”